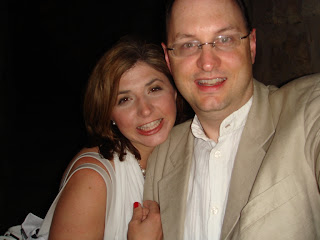 LG is the new love in my life. Don’t worry, my husband WG doesn’t have any REAL competition – but LG has helped me get my groove back as I settle into my new life in Germany! Almost a decade ago when WG & I first moved to Paris we were lucky enough to have made friends with an American-Canadian couple who had lived in France for ages. They helped us acclimate to living abroad; to-live-in-europe/” target=”_blank”>teaching us how to do things as a “local” would, giving advice on the ins and outs of Paris life. It is clearly because of their help that we acclimated to life abroad as well as we did.

They were thoroughly integrated, spoke French fluently, had almost exclusively French friends and lived in the Paris suburbs sending their children to the local French school. While I like to think that we brought a little “taste of home” to their life, they, in turn, pastored our church, introduced us to their French friends and foreign foods, drove us places as we didn’t have a car and they even went with us shopping for appliances when we moved out of temporary housing and into our home in Paris

When you move into a Parisian apartment the former tenants truly have taken “everything but the kitchen sink”. Gone are the kitchen counters, the stove, the refrigerator and more. Light bulbs, if they were lucky enough to have been left behind, hang barren from wires about the abode. Being only 27 years old at the time, WG & I had only been married a few years. We were in the “starter stage” of our life together and had not yet purchased our first home. Which is to say, we had also never gone shopping for “serious adult purchases” such as washing machines, refrigerators and the lot. Needless to say, living in a foreign country and on a limited “recently out of university” budget, we were at a loss wondering what to buy and how to go about doing it.

Our American/Canadian couple friends came to the rescue. We loaded up in their car, drove across Paris to the biggest Darty in town and with fists full of francs we set about buying an apartment’s worth of appliances. We picked out a TV, a wonderful bright red refrigerator that screamed Europe for I’d never seen anything like it in America, a dishwasher, a stove & microwave and finally a washing machine. I wanted to buy a washer AND dryer – but it would have to be a stackable unit as the space in our over-priced apartment was too small for the luxury of a side by side unit. Then the salesman led me to the washer/dryer combos and he had me at Bonjour – space saving AND dual purpose. I loved it. But my dear friends, seeing the lust in my eyes, advised….

“You say you want to acclimate…. if you’re going to acclimate, you have to shed your American ways. You don’t need a clothes dryer – All our French friends use drying racks and it works perfectly fine. In fact, it’s really better for the clothes extending the life on all your Parisian frocks. And besides, have you received your first electric bill yet? A dryer sucks down energy and it will send your electric bill through the roof! Trust me on this. To live like a Parisian, You don’t need to buy a dryer.”

Dejected, saddened, I turned away from the washer/dryer combo and trudged back to the washing machine sans dryers, choosing a single washing machine – and life like a local. But if I was going to live like a local I was going to do so with the highest spin cycle possible! “The trick to line drying,” my friend advised, “is you have to get the highest spin to wring the clothes as dry as possible before hanging them.” And for years now, I’ve “lived like a local”. 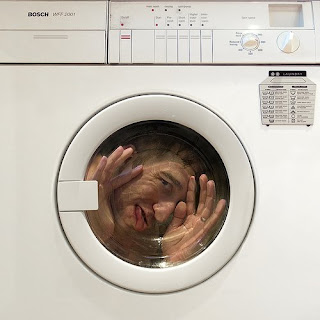 Years passed. I acclimated to life in Europe. I learned French. I moved to Holland. I tried to learn Dutch. I lost touch with those dear friends who were such an integral part of our first year abroad. WG was promoted more than a few times at work and the life we led as a young married couple just out of university, overjoyed to be “scraping by in Europe”, was a thing of the past. We still loved Europe but we had quit scraping by. At some point, we started living like adults. We got a company car, a bigger paycheck, I started my company and today, living in Germany, we consider ourselves downright blessed during these times of recession.

But for the last decade I’ve washed my clothes in this “little washing machine that could”. At some point, I realized that I was the ONLY one of my expat friends who didn’t have a dryer. I then started surveying my French, Belgian, Dutch, German and other European friends and realized that most of them have dryers too.

“What? They were locals and they had dryers? C’est pas possible!”

With more surveying I discovered that it was mostly my younger European friends in their 20s and early 30’s who were dryer-less and I realized now that I was 35 I could be “acclimated to European life” AND have a dryer too. Drying clothes in a machine became my hidden fantasy. But I’m pragmatic, and with a washing machine that worked I could not justify purchasing a new one. Nor did I have space in my laundry room for a side by side washer AND dryer, so I found myself in a quandary, praying that my washing machine would die. 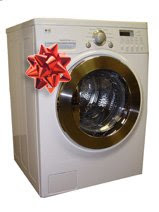 About 3 weeks ago, just as I moved to Berlin, it happened – our little washer that could, couldn’t. My Parisian washing machine died a peaceful death. I saluted “au revoir” as the men from Berlin’s Media Markt wheeled it out of my apartment and into t
he elevator. Nearly a decade ago, this washer had been carried up 5 flights into my Parisian apartment by a determined (and well-tipped) delivery man. Now, that unit which had served me well was gone and in its place Media Markt had delivered my beautiful new LG washer-dryer (energy efficient) combo unit! It fluffs, it purrs and makes our whole apartment smell like laundry.

In the evening, in the dim glow of candlelight (for the chandeliers still haven’t been hung) my husband WG comes home at night and nuzzles my neck saying seductively, “You smell like laundry.” In the past, I wouldn’t have taken this as an aphrodisiac, but I know, coming from WG, these whispered words speak volumes of love. 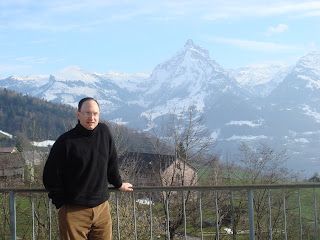 When the LG was delivered, WG plunked a red bow on the unit, claiming it was my Valentines present… the fact that the washer/dryer unit was accompanied by a gorgeous pair of earrings saved him from being forever ridiculed by my friends who would have taunted him with, “You can’t buy your wife an appliance for Valentine’s Day!” But in fact, this year, WG could have gotten away with it. For I love my LG, and did I mention I love my WG too?

Here’s wishing all my Diva Readers a belated Happy Valentine’s Day. In my book, Valentine’s Day is every day, at least from now on, on the days when I do laundry anyway!

A Desperate Housewife Who is Starting To Feel Like A Diva Again!