Earlier this year I was chatting with Amsterdam Antiquair Robert Schreuder about the vision behind The Antiques Diva™ weekly blog, the proposed series of books, and my antiques shopping tour business, when I explained, “My goal, as The Antiques Diva™, is to make antiques accessible. People view antiques and art as stuffy and serious and people fear making purchases when, in fact, antiques should be fun and extraordinary daily delights! They add a dose of F. Scott Fitzgerald to an ordinary life. “

Robert exclaimed, “You must go to AF’sH!” This said with a flourish of hands, reminding me he speaks Italian & French (in addition to 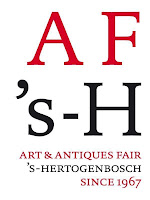 English & Dutch), and has had great opportunity to practice the romance languages while searching secret Mediterranean sources for the 17th – 19th century Grand Tour Souvenirs which stock his open-by-appointment-only antiques atelier. “Art & Antiques Fair ‘s-Hertogenbosch happens to be the oldest art & antiques fair in Holland – having run for 40-odd years,” he continued, “and it enjoys an incredible reputation for the quality and diversity of the objects on offer as well as a warm and, dare I say, “gezellig” atmosphere! But this year AF’sH is doing something different — they’re doing it diva style.”

And “doing it diva style” they certainly are! Last week on Thursday April 10, 2008 AF’sH opened for a pre-preview with bottomless “coup de champagne”, tiny hors d’oeuvres and black-tie waiters – all of which, though fantastic, was to be expected for a premier art & antiques fair opening. However, the real surprise came during the Grand Opening of the fair when The Hague Couturier Frans Hoogendoorn paraded a dazzling assortment of curvy, pearl-clad models and kicked off this 42nd Kunst-en-Antiekbeurs with a fashion show, presenting his summer collection in a show so beautifully choreographed with such spunk that I suspect “toute de Paris” stood up and took notice! 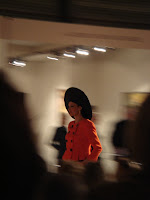 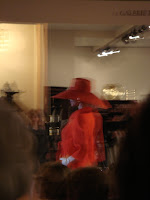 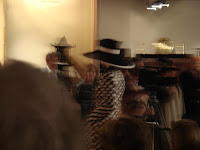 Hoogendoorn, a Dutch fashion designer whose personal portfolio contains photos of his dresses gracing “The Royals“, creates designs for the modern-day diva, combining traditional, Jackie O type elements with Grace Kelly hats against more current 21st century designs. In fact, this combination of past and present seemed to be an undercurrent running through the halls of the Brabanthallen where the fair is being held this week – April 11 – 20, 2008. 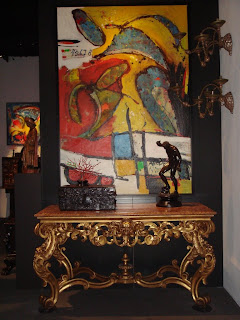 Modern Art juxtaposed against the fine lines of Louis-something furniture or propped against chateau-chic 17th century Southern European chests & commodes was a feature of numerous vendors. I particularly liked Remco Van Leeuwen Antiquair’s collection of Gothic, Renaissance and Modern Art. No one, however, did this “Modern + Antique” combo better than Jan Roelof whose stall simply stole the show! Perhaps Roelof’s premier booth design and presentation doesn’t come as a surprise, as Jan himself is the Chairman of AF’sH. He has worked in the “traveling antiques business” for 30 years, his name becoming synonymous with some of Europe’s most prestigious international art & antiques fairs. 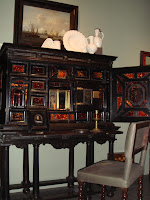 If Jan Roelof stole the show with his gorgeous presentations of the past and present, then Bruil & Brandsma Antiquairs takes the award for the most spectacular item for sale at the fair — a 17th century Dutch red tortoiseshell curiosity cabinet which caused me to swoon with desire and reminded me of a similar piece I had coveted just a week ago while visiting the Marie Antoinette exhibition at the Grand Palais in Paris. Perhaps what makes this cabinet such a curiosity is that the dark brown & red tortoise veneer practically sparkles within the expo halls, hinting at how it might glimmer with less industrial lighting. When the savvy B& B vendor recognized my interest he leaned over and whispered in my ear, with just a quiver of excitement, “It’s gold plate beneath the tortois
e that is causing that effect, Madame!” and I responded in turn, “A real curiosity, ‘Meneer’!”

Curiosity cabinets such as these were often used to house a vast range of objects such as plants, fossils, zoological specimens and exotica from colonial cultures, however they would have also been used to display treasures collected during the Grand Tour in the 17th – 19th centuries. The Grand Tour was intended to round off a gentleman’s cultural education by exposing him to the art, sciences, court etiquette and languages of “the continent”. But I think London’s Time Out Author Ossian Ward has it right when he writes, “it was also an excuse to fill enormous traveling trunks (carried by servants, of course) with souvenirs, artifact’s and picture-perfect vistas of Venice painted by Canaletto or Guardi, and many rich aristos returned to London laden with enough art to form their own museums.” 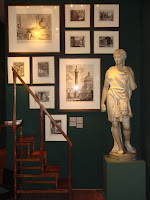 Thankfully these Grand Tour Souvenirs haven’t all been gobbled up by the museums and are still on the market today for private collections. Enter Robert Schreuder Antiquair, who specializes in Grand Tour Souvenirs in addition to Neoclassical, Empire and Biedermeier furniture and study objects. Robert’s booth at AFsH was as intriguing to me at this fair as it was when I first became acquainted with him at the Naarden’s Kunst & Antiek Weekend. Another vendor who impressed me equally at both fairs is S. Van Leeuwen from The Hague.

A vendor at AF’sH I wasn’t yet familiar with – Galerie Bianca Landgraaf – has an atelier in Laren, which happens to be one of my favorite shopping towns in Holland and I’m baffled that I hadn’t stumbled upon her gallery before now. This, I can assure you, is a mistake I’m set to remedy as I was enamored with one of her artists, a young Venezuelan man, Karim Borjas, whose 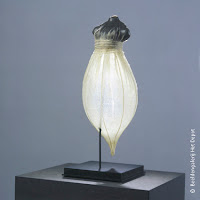 expressionist abstract art would pair perfectly with any of the offerings around the fair. Perhaps the piece I’m most likely to purchase from this fair is a silk and wax statue designed by mixed-media sculptress Rebecca Soethoud, displayed at the Gallery Van Loon & Simons. Meanwhile, Wim de Boer Kunsthandel’s booth housed so many striking paintings that I contemplated simply moving into his stall as I couldn’t decide which of his delicious pieces I might want to take home.

There is one last item I’m considering purchasing from AF’sH and, believe it or not, it’s not for me! Simons Juweliers had a collection of jewels fit for a diva, thus it is an example of my supreme self-control that I didn’t find a present for myself but instead a birthday gift for my darling husband. Simons Juweliers offers both an impressive inventory of modern accessories as well as the largest collections of antique jewelry & silver in Holland. Such is their collection that they are now a guest exhibitor at Amsterdam’s recently reopened Tassenmuseum – The Museum of Bags 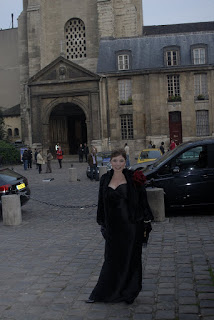 & Purses – located on the Prinsengracht nearby Amsterdam’s Antique District. Though their assortment of cuff links on display at the fair was not large, it was a top-notch collection. Next time I visit the fair it will be with my husband on my arm and I am quite certain, should Simons still have them in stock, that we’ll leave Den Bosch with a gorgeous pair of lapis lazuli and diamond cuff links pinned into WG’s French blue Cafe Coton dress shirt.