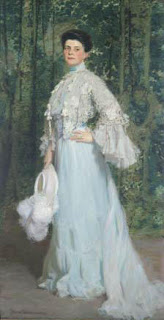 Today’s blog comes to you “Live From New York”! The Contessa,a New York state-based antiques dealer and Diva reader, has written to The Antiques Diva™ to share details on a stateside exhibition of “American Painters in France from 1885- 1915”.

The Contessa’s conversational writing style is a joy, harking back to her days as a radio personality. I am delighted to say that The Contessa is joining the team of regular diva reporters as she’ll be writing a series of upcoming guest blogs which are sure to daze & amaze! Thanks Contessa!

If you can’t afford a trip to Europe this year but happen to be in the New York state capital, there is a fix Francais for you. Impressionist Giverny – American Painters in France, 1885-1915 is currently on display through January 4th at the Albany Institute of History and Art in Albany, NY. 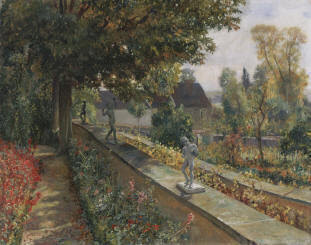 Giverny, the French village where Claude Monet did some of his most beautiful works, attracted hundreds of artists – many American – through the end of the 19th and beginning of the 20th centuries. The beauty represented in Monet’s art attracted so many artists from around the world that it transformed the village from a sleepy hamlet to a colorful and thriving community.

More than 50 of those stunning oil paintings from American artists who lived in Giverny are on display, including “The Terrace Walls” by Will Hicok Low, “The Card Players” by Theodore Earl Butler and “Mabel Conkling” by Frederick William Macmonnies. The exhibit was originally presented by the Musee d’Art Americain in Giverny, France. 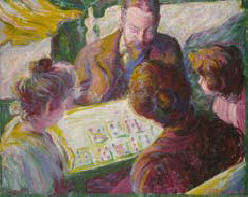 Admission to the display also includes admission to the Institute Museum as well. There are gallery talks on this exhibit by a museum docent every Saturday and Sunday at 2 pm.

Head to Albany over the next 2 1/2 months and soak up this wonderful gem of an exhibition!