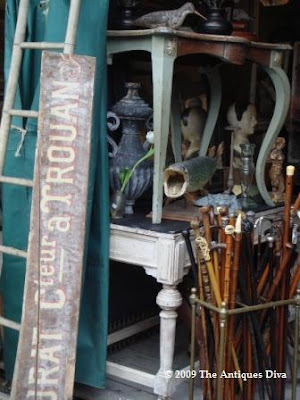 Parlez-vous brocante? Do you speak French flea market? While the “Armoire” is the best known piece of French furniture, did you know that if an armoire only has one door then it is not an “Armoire”? Instead, it is a “Bonnetiere” deriving its name from the rounded top which looks like the shape of a bonnet worn by “Breton” ladies ( women from a region in northern France called Brittany). Sometimes you’ll see this bell-shaped armoire top referred to as a “Chapeau de Gendarme” or a police man’s hat. But if that “Bonnetiere” is divided by a drawer then this piece becomes an “Homme Debout” (or “Standing Man”). 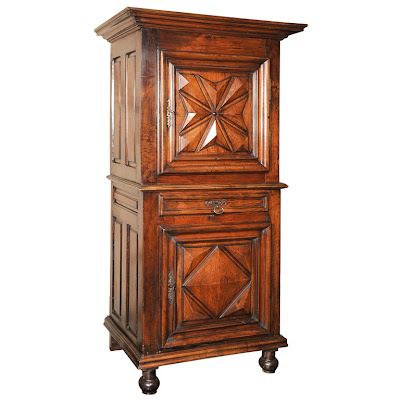 As Anglophones, when we hear “Commode” we think of a toilet, but in France a “Commode” is a chest of drawers and is considered the finest piece of furniture made for a house! While Anglophones tend to use “chest of drawers” for storing clothes, the French would use a “Coffre”. We might be familiar with the term “buffet” used as a side table in the dining room, but did you know a true buffet is higher than a commode with 2 doors on the bottom and 2 drawers at the top? Meanwhile, a “Buffet a Deux Corps” is literally a cabinet with 2 bodies. The bottom is usually traditional, but then a 2nd upper body is placed on top. However, if the top part has a plate rack, instead of doors, then it becomes a “Vaisselier”. 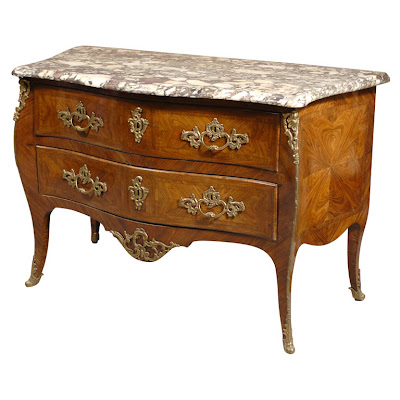 This Louis XV Style Commode in Kingwood & Tulipwood, c. 1850 is similar to the one I have at home! Shop like The Diva at 1st Dibs – William Word Fine Antiques 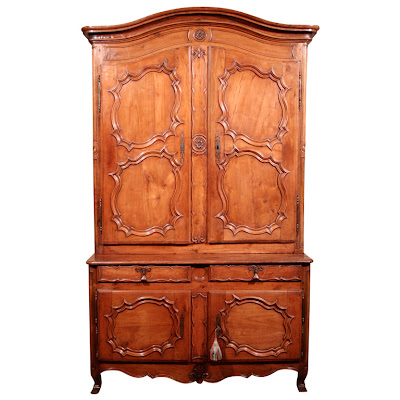 This Louis XV Cherry Buffet a Deux Corps, Circa 1760 is from
Richard Norton Antiques at 1st Dibs

A shelf (or even a floor in an apartment) is called an “Etage” but if a piece which sole purpose is shelving, then it is called an “Tagre”. However, if you’re storing books on that “tagre” and it has enclosed sides, then it is called a “Bibliotheque” which happens to be the same word for library in France. Wouldn’t it be confusing to ask how many bookshelves a certain library has?

All this thinking in a foreign language probably leaves you tired. You might as well take a “Siege”!! No, don’t attack a foreign city, instead take a seat – in fact, any seat, this is a general term for “Canapes, Fauteuils or Chaise”. You might know chair is “chaise” in French, but are you familiar with “Fauteuils”? This is nothing more than an armchair from any period. But if that armchair is upholstered, has an exposed wood frame and enclosed sides, then it is considered a “Bergere”. While you might be hungry don’t assume you’ll get an hors-d’oeuvre when you hear canapé mentioned – for a French man is probably asking you to sit on an antique wood-framed couch or love seat! 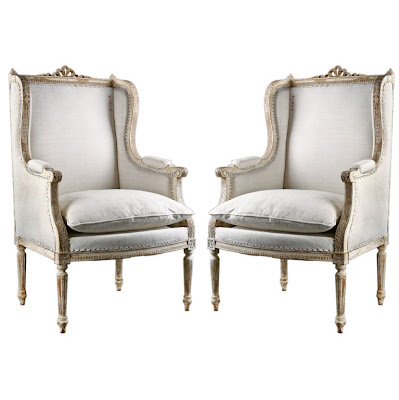 If you want to kick back and relax, you won’t find a Lazy Boy in France, but you will find a “Chaise Longue”, a chair long enough to support your legs! But if the “Chaise Longue” has a back rest at both ends it is known as a “Recamier”. Meanwhile a grand chair with matching ottoman would be called a “Duchess Brise”. If a chair has a footstool but it doesn’t match, that’s “un pouf”! Of course, if you’re looking for a chair that looks like a stool to sit at the side of a chair but not sit your feet on, then that’s a “Tabouret”! 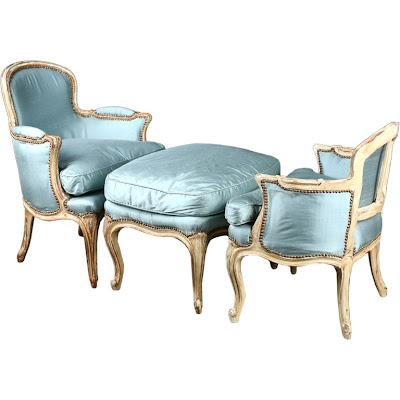 I’ll be looking for something like this for my bedroom at Diva Tours French Flea Market Fall Extravaganza. ThisThree-piece Louis XV style Duchesse Brisee was made in 1870 and is available on line from, you guessed it, 1st Dibs.com
Vendor: Alhambra Antiques

Last but not least, you might need a “Lumire” to read by! While chandelier sure sounds like a French word to me, the French do not use this term – they call them “Lustre”. Finally, we come 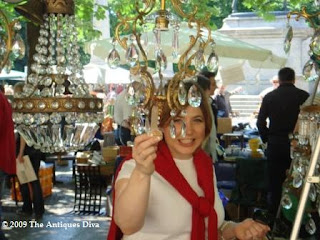 to something simple – a lamp is just “une Lampe”, but that’s where simple stops! If I were to say “Appliques” what would you think it means? Me? I think of an embroidery or iron-on patch, but in French this is the word for a sconce! That’s it!!! I’ve had enough French furniture vocabulary for one day! I’m going to bed, which in French is “Lit” pronounced “lee”!

Social
« Say Cheese!! Camembert Label Collecting
A Podcast Interview with The Antiques Diva and All The Best »