My husband, WG, tries to stay at The Savoy whenever he’s in London on business. Upon hearing the news of their temporary closure, he was so depressed, claiming that he never sleeps as well as he does when at The Savoy. I think this might have more to do with the dinner he eats downstairs at their Michelin-starred restaurant, The Savoy Grill, than the actual beds themselves, but his comment did get me thinking… What will the hotel do with all their furniture and decorative items when they redecorate?

A little investigative shopping revealed that on Dec 18, 19, and 20, 2007 – through Bonham’s Auction House – The Savoy is selling more than 3,000 pieces of their hotel – including their “oh so comfy” bespoke beds! 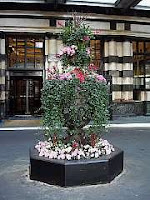 Regardless of the fact that WG sleeps like a rock at The Savoy, purchasing a used hotel room bed seems a little gross – even if their beds have been slept on by the world’s most powerful people. Nevertheless, owning a piece of The Savoy is owning a little piece of history. So perhaps I’ll bid on something less personal. The 3-tier planter from the front of the hotel, which sits next to the only road in London where traffic flows on the right side of the road, would be an absolute treat. And I know WG likes The Savoy’s Art Deco fixtures, silver plate and hallway chandeliers. For those of you with a bigger budget than me, you might consider snapping up the parquet ballroom dance floor or the giant, white, grand piano!

Whatever you buy, it’s certain to be a steal, for The Savoy is setting no reserves in an “everything must go” type of auction. Entry to The Savoy Sale preview and auction days will be by catalogue ownership only – so you’d better hurry and order your’s today! But don’t forget that, prior to bidding, you will need to register with Bonham’s and this process can take several days.

As I’ll be out of town, I’ll be bidding on-line, but they also accept absentee ballots and telephone bids. Best of all, should you not be able to whisk off to London to collect the purchase yourself, Bonham’s has thought of everything and already contracted a shipping company! Crown Worldwide Ltd, the relocation company that has handled my last two moves, is servicing

Bonham’s and will be able to provide quotes for shipping your items to your chosen destination. They do, however, advise that you inquire on shipping estimates prior to bidding – saving yourself from any unsavory surprises later!