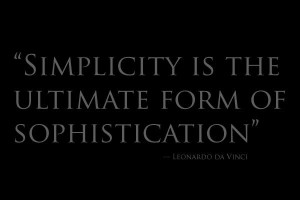 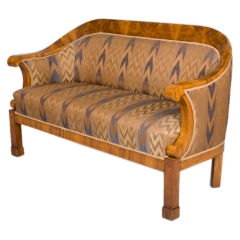 top: 5px; float: left; color: white; background: #781300; border: 1px solid darkkhaki; font-size: 60px; line-height: 50px; padding-top: 1px; padding-right: 5px; font-family: times;”>When it comes to antique furniture, different styles often reflect what was happening during the era. Much like today in the post 9/11 era we’ve seen a shift towards comfort and coziness in the home, in earlier times shifts in politics, reigning monarchs, industrialization, and war had a lot to do with the way furniture was made and the materials that were used to make it. The Biedermeier style is a fabulous example of this – it emerged in central Europe after the Napoleonic Wars. Since Napoleon had conquered most of Europe, his defeat at Waterloo in 1815 brought many changes, including a shift in preference from popular French Empire style to a more clean-lined look that is still popular today. As Leonardo da Vinci said, “Simplicity is the ultimate form of sophistication.” 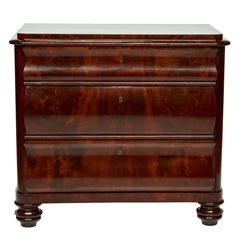 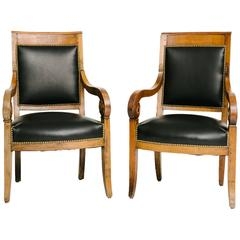 During this time of peace, a growing urban middle class shifted its focus towards home making and interior design – there was a focus on today what we’d call nesting. However, the mood during the early Biedermeier period was still cautious, and is reflected in the simpler forms of furniture, essentially Empire style stripped of its ormolu mounts and gilding toning it down a bit. As Mies Van der Rohe said, “Less in More.” Pieces were also made more on human scale and were created to be functional as well as beautiful. While these pieces had less ornamentation, they were not devoid of detail -(God, I’m full of quotes today… wasn’t it Mies who said, “God is in the details?). By 1830 craftsmen began to include simple carvings of sphinx, swans, lion paws, acanthus, and lyres. 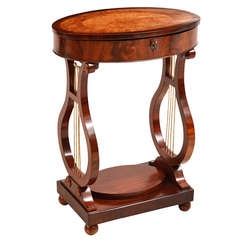 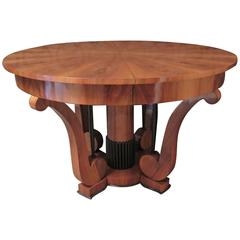 While Empire pieces were usually made from dark mahogany woods, Biedermeier furniture was typically made of lighter woods such as birch, ash, pear, and cherry giving the styles a decisively different feel. Viennese craftsmen began to use local timber, often finishing pieces with walnut veneer over a soft wood frame. They also started using original designs rather than taking inspiration from French, German, and Italian designs. Sometimes black poplar or bird’s eye maple were used and artisans would adorn furniture with gold paint rather than gilding them. While bronze appliqués were popular on Empire pieces, less expensive stamped brass wreaths or stars could also be added to Biedermeier pieces. 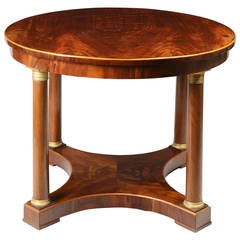 As politics changed from 1815-1848 furniture makers gradually shifted from a utilitarian mindset to a more romanticized style, where straight lines became curved and simple finishes became embellished with inlay and other decorative elements. The serpentine shape began appearing in chair arms and table legs. Pleated fabrics became popular and were used in upholstery as well as on walls, ceilings and in alcoves. As craftsmen travelled throughout Europe looking for work, they brought traditions from their native lands and incorporated local styles, which is why we see so many variations of Biedermeier furniture. A slight alteration to a chair leg, a curve of a table’s foot, an experimental finish— all of these elements make the Biedermeier style so interesting and diverse. 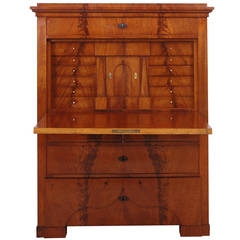 After WWII Biedermeier furniture became popular in Britain and America, and its influence can even be seen in the early 1920’s when Art Deco came into fashion. Today, many furniture makers still take inspiration for modern furniture lines from the Biedermeier style because it has clean lines and is popular with city-dwellers throughout the world. It’s no wonder this style has endured for over a century—we still long for perfectly proportioned pieces that offer functionality and are aesthetically pleasing too. 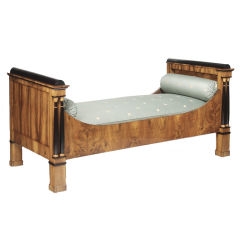 If you would like information on our antique buying tours or buying services, email us at info@antiquesdiva.com. We’d love to help you source the pieces you’re looking for! 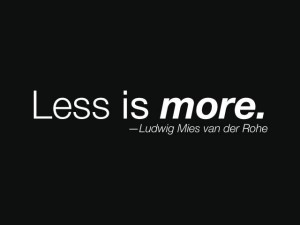