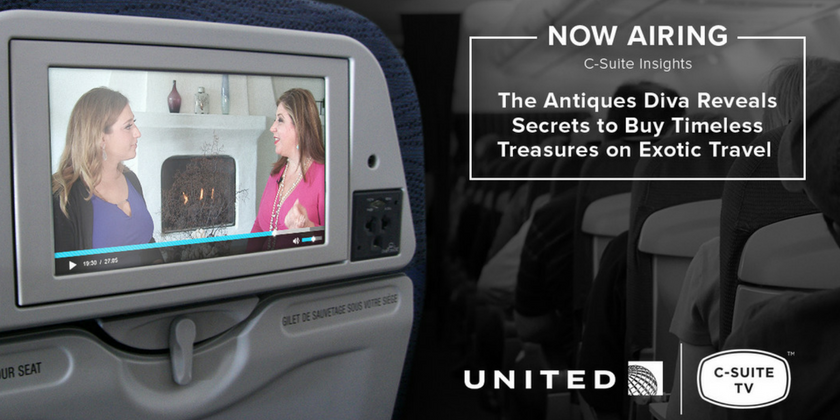 I’m flying to New York to speak at Greenwich District Design Day of Design June 5: Mixing it Up:
The Art of Combining Antiques in Contemporary Spaces – and during my flight, I’ll be watching myself on United’s Inflight C-Suite Insights! My interview with journalist Nicole Sawyer premiered on United June 1 and will broadcast throughout June.

I’d love to see you in Greenwich! Tori Mellott, style editor of Traditional Home, along with designer Robert Passal and me – The Antiques Diva, Toma Clark Haines – delve into the topic of #MakingAntiquesModern through mixing pieces from the past with contemporary spaces. It’s all about the mix! 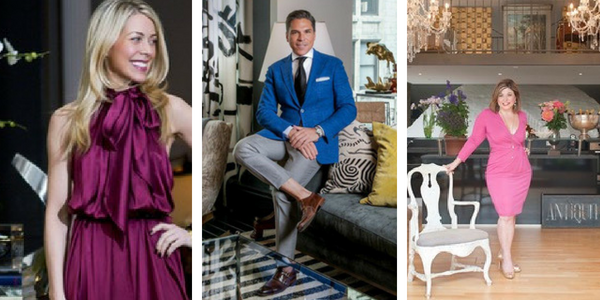 If you’re not flying on United in June, watch my interview here, or read the transcript below. 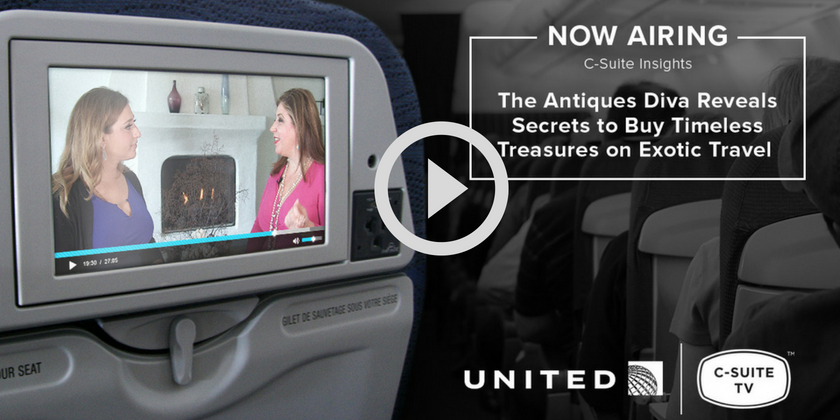 Nicole: She’s one of the most powerful women in the antiques industry. Toma Clark Haines, the founder of The Antiques Diva, the world’s largest antiques touring company, makes collecting cool modern and sexy.

Toma: This is a classic Hermes bag. Nothing says style more than Hermes

Nicole: She takes travelers looking for unique statement pieces to exotic places like Bangkok and Bali.

Toma: What’s trending when it comes to jewelry believe it or not is brooches. In the past, you know grandma wore them up here on her lapel. Now we are shaking it up – for example, the dress I’m wearing. I may wear one right here on the waistband of my wrap dress. And you know what, brooches are not just for women. Men are wearing them.

Nicole: I met up with her at the Eden Roc hotel to find out how this girl from a small town in Oklahoma built an international empire and.

Toma: I’m going to take you antiquing and it is going to be antiquing like you have never seen.

Nicole: Hi, we’re here at the U.S. Antique Show in Miami and we’re going to show you how to mix timeless treasures with modern trends.

Nicole: Why do you think the average person hears the word antique and it’s so intimidating?

Toma: I think you’ve been taught with antiques that you go into your grandmother’s house and you’re not allowed to touch things. And people have become afraid. They think of antiques as stuffy, as old-fashioned, as breakable. The reality is if an 18th-century chair has survived 200 years, don’t you think that they can survive you too? When you have antiques, they have patina. If it has a little scratch on it the fact is it’s not going to affect the value. It’s adding to the character of the piece.

Nicole: Walk me through what it’s like taking a tour with The Antiques Diva.

Toma: We meet up with the client and then we assess what is it that you’re looking for and then we’re going to custom plan the route, saving you the most amount of time and also saving you money

Nicole: I wanted to get a vintage purse. What’s in style right now?

Toma: You want handbags that are bold statement pieces and vintage handbags from the 1950s often have that great shape, the oversized skill and fabulous patina on their leathers. On our tours, we translate, we negotiate and then we help you ship the items home sweet home. Shipping large things can be a challenge.

Nicole: So what’s your advice for shipping antiques?

Toma: Shipping often is one of the most expensive parts when you’re buying antiques internationally. However, if you’re an American buying in France you can expect that the price in France is three to five times lower than you would ever find it here in the States. if you’re buying at the right price point, suddenly the cost of shipping isn’t as expensive because you’re still saving money.

Nicole: What is the most requested exotic place that you take people?

Toma: The most popular place is probably France. When you think antiques, you think French antiques. Belgium has incredible prices. At the moment what’s hip, what every interior designer in America is asking me for, is Swedish antiques. And actually, all the antique warehouses in Sweden are located down in southern Sweden. Knowing where to go is probably the most important thing we do.

Nicole: Is there are good times of year that you should be searching for antiques and when you should not go?

Toma: You need to look at when the public holidays are and the week surrounding it and avoid those periods. Otherwise, you’re going to show up and be disappointed. There’s nothing worse than getting to a destination and discovering everything’s closed.

Nicole: A lot of people think of Europe as the place to go to find fine antiques but you say that’s not the case.

Toma: I love antiquing in Europe but if you want to know what’s hot, what’s next – Southeast Asia has the two best destinations I think for what’s next in antiques are Chiang Mai in Thailand and believe it or not Bali! There is an entire strip in Seminyak, probably four miles long. You really find the Paris Flea Market of Asia.

Nicole: What do you think it’s the most challenging part about taking your clients on antique tours?

Toma: Clients don’t always know what they want. The first thing we do is say, show me photos. Pictures say a thousand words. If the client can show me what they’re looking for we can help them find it. But words alone often are not enough.

Nicole: So many people buy antiques as an investment. How do you know if it’s a good investment for the future?

Toma: Okay, the first thing I tell someone is buy it because you love it. If you love it, you’re never going to make a bad investment. Second thing is your research. If you’re buying antiques, it’s determining what price level you’re comfortable with and what’s your purpose.

Nicole: Many people have things in their home, maybe they inherit it from their grandparents or they found something really cool at a garage sale. if you’re one of those people – you’re not sure what it is or what it’s worth how can you find out more information about it.

Toma: When you’re trying to determine the value of an antique, the reality is you want to ask someone who knows more than you know. One option: you go to an auction house and you have them do an evaluation. But not everyone has time for that and often you have to pay for that. So there’s this great new app, it’s called Chattic. And all you have to do is take a picture, upload it to the app and a community of like-minded people will give you their advice on the piece that you’re looking for information on.

Nicole: Who are some of your clients?

Toma: Antique dealers, interior designers, architects, developers, hoteliers – I will tell you some of our best clients are those mere shopping mortals.

Nicole: Some of your core buyers are female baby boomers, an interior designer. But what about the younger generation – are you seeing that they have an interest in antiques?

Toma: Absolutely. Antiques are ideal for Millennials because they want their homes to represent who they are, where they’ve been and where they’re going. Some of the younger generation – they hear the word ‘antique’ and they’re like oh, that’s outdated.

Nicole: But isn’t it true that right now one of the hottest design trends is to actually take treasures that are old and mix them with modern design?

Toma: Exactly. What I like is when you take a Renaissance piece and then mix it in a room. So throw in a nice chair, throw in a grandmaster painting simultaneously – that’s what works with AMT I would agree and that’s what you’re seeing in a lot of the designer magazines these days. And maybe an 18th-century commode with a more contemporary painting. With antiques – it’s all about the mix.

Nicole: You also work with the Antique Young Guns – those are all dealers under the age of 40.

Toma: They’re preserving the future of antiques and they’re looking at antiques in different ways. They’re going to put an antique chest of drawers in a bathroom. They’re going to mix it up and take an industrial cabinet and add it into their kitchen. And so if you want to know what’s going to be hot in antiques you need to look at the young buyers. If you think about art communities – artists will live in a neighborhood, making the neighborhood cool and then the yuppies move in and the prices raise. If you look at this exact same mentality when it comes to antiques, you have the young antique buyers who are buying what’s inexpensive. They’re using it new and innovative ways. They’re making it hip, they’re making it cool and now older people want to be buying what it is they bought in the first place.

This is my favorite find of the fair by the way – if I were to pick my top item at the Original Miami Beach Show, voila! it’s your pink flamingo!

Nicole: You’re running a business. Everyone knows you could have the greatest idea but getting your business brand out there – it’s a challenge. What is the key to creating a recognizable brand?

Toma: When you have a company it’s easy to feel like you want to give up,  and even on those down days saying I’m going to get up and continue working. And the thing that happens is over time you realize I have built something awesome, and it wasn’t one single step along the way did it, it was a series of steps towards my destination.

Nicole: You’re now launching your own furniture line as well.

Toma: The Antiques Diva Collection for Aidan Gray Home. So Louis 16th furniture is my favorite style of furniture. It’s neoclassical design. King Louis – he went to Pompeii, he saw what was happening in the ruins of Pompeii. He was so inspired by the them that he had his team of craftsmen build neoclassical antiques in France for Versailles. For the last 10 years I’ve been scouring the world buying antiques, seeking design inspiration and now for the first time I get to take that inspiration and turn it into creation.

Nicole: You also just launched your own jewelry line?

Toma: Yes, I have just launched my jewelry collection and our tagline is Lush Decadence. The goal is to create jewelry that is just a little bit beyond reality.

Nicole: So where does your inspiration come from?

Toma: Vintage fashion, also my travels. I’ve done a lot of pieces that are antique botanical pieces and they actually come from Art Nouveau architecture.

Nicole: Well thank you so much. Toma. I really appreciate it.

Thank you so much Nicole!