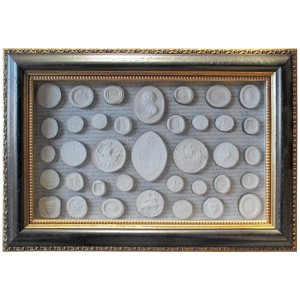 top: 5px; float: left; color: white; background: #781300; border: 1px solid darkkhaki; font-size: 60px; line-height: 50px; padding-top: 1px; padding-right: 5px; font-family: times;”>When clients come on an Antiques Diva Buying Tour, they often want to purchase items that will add to a collection and pieces that they can decorate their homes with. Whether we’re whisking them from shop to shop or perusing an outdoor flea market, we often come across intaglios in Italy as well as France and Belgium – they can be a wonderful collector’s item as well as decorative! 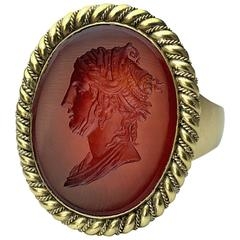 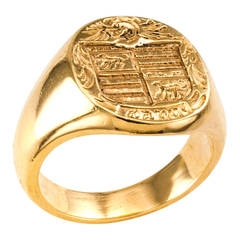 While they can be made in a variety of materials—including plastic— the most popular antique intaglios are fashioned from stone, coral, shell, fine metals, and glass. They were created when artists carved down into the material to hollow out a recessed image. Just as form meets function with many antiques, intaglios once served a practical purpose. When brushed with wax or ink, the intaglio was used as a seal, identifying the sender of a letter or document. 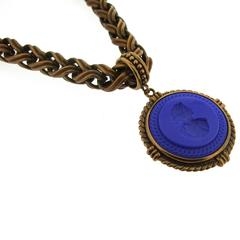 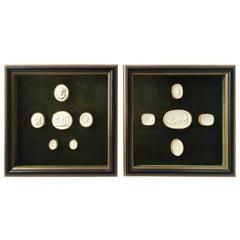 In ancient times, intaglios were made from gems. The word “glyptic” refers to the art of carving small gem stones which could be mounted in rings. When a letter was being sent, the sender would dip their glyptic-intaglio in wax, acting as a distinctive personal signature once the wax hardened. A finely carved intaglio meant that forgery would be more difficult. The recessed cut surfaces of these intaglio gems are often very well preserved and reveal that artificial methods such as heat, sugar, and dyes were used to achieve varying colors in the gemstones. 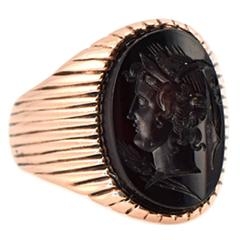 Intaglios have been used for thousands of years and in ancient cultures of Egypt, Mesopotamia, Greece, and Rome. In the 8th and 7th centuries BC, carved gems in Greece often depicted geometric animal poses. By the 6th century BC, gem carvings incorporated more human and divine figures, always very detailed. In the 5th century relief carvings—similar to cameos– became popular and people began wearing them as jewelry. However intaglios have had many renaissances throughout the world, and are often associated with Italy, France, and England. From the 14th century to the early 1900’s intaglios were widely used through Europe. Many of the collections found today have been mounted and framed and are used as decorative items. 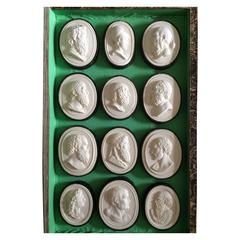 Today intaglios can be used as decoration or even to make one-of-a-kind jewelry pieces. However you choose to use them, owning a piece of history is exhilarating! The story behind each unique intaglio shows just how fascinating antiques can be. If you would like information on taking an Antiques Diva Buying Tour, email us at info@antiquesdiva.com.