to 10px; width: 400px; cursor: hand; height: 300px; text-align: center;” alt=”” src=”http://3.bp.blogspot.com/_kcTb8DnPVW4/Sk9pChjbl4I/AAAAAAAADSE/Wdv0C3r9zsw/s400/166.1.jpg” border=”0″ />top: 2px; padding-right: 5px; font-family: times;”>Last month, I wrote a blog telling about our upcoming trip to Italy. I waxed on about how for once in my life I was going to slow down and smell the roses. That rather than attempting to crunch a Grand Tour of Italy into a week and a half of vacation, that my husband and I had decided to visit just one location – taking it easy, lingering over the sights of Florence, absorbing the culture and romancing the moment. But this intention towards slow travel – towards only studying one site – was a fallacy in my mind before we’d walked out the door, rolling our luggage behind. You see, what I forgot to mention in that particular post was that before we even arrived in Italy, we were taking another trip to visit friends for 4 days and that we allowed an extra 3 days worth of time for taking detours on the 11 ½ hour drive each way from Berlin, Germany to Florence, Italy.to 10px; width: 400px; cursor: hand; height: 300px; text-align: center;” alt=”” src=”http://1.bp.blogspot.com/_kcTb8DnPVW4/Sk9pBg292XI/AAAAAAAADRk/1sRVNgL5XhQ/s400/024.1.jpg” border=”0″ />The plan was quite simple, really, and though we saw lots more than just Florence as I proclaimed, we really did take time to linger as long as possible at each site visited. The vacation started one day after work, driving late into the evening, arriving at our friend’s front door in Stuttgart Germany as the coo-coo tweeted twelve times and the station wagon turned into a pumpkin. Herr and Frau Stuttgart were waiting “chez them”, dressed in PJ’s and we kissed hello, laughing over a glass of wine before slipping under the covers and awoke to the smell of freshly baked bread the next morning.

to 10px; width: 400px; cursor: hand; height: 300px; text-align: center;” alt=”” src=”http://2.bp.blogspot.com/_kcTb8DnPVW4/Sk9pB7QRVWI/AAAAAAAADR0/JJ6Xej1P2xE/s400/092.1.jpg” border=”0″ />For the next two days we lingered at “The Stuttgart Family” house, sitting in their garden, admiring their view, their vineyard and 10,000 rose bushes. On a lazy afternoon we went into town, meandering the Stuttgart Flea Market stalls and visiting antique shops and then spent the evening at a nearby Schloss, listening to music at the regional music festival.

to 10px; width: 320px; cursor: hand; height: 320px; text-align: center;” alt=”” src=”http://4.bp.blogspot.com/_kcTb8DnPVW4/Sk9rPgeA6lI/AAAAAAAADTE/_D6NiN15v_A/s320/Mercedes-Benz_logo.gif” border=”0″ />The next day we drove our black Benz to the Mercedes Benz Museum – a tour that while very interesting to me later came back to haunt WG when I asked him to join me in Florence at the toreferragamo.it/” target=”_blank”>Salvatore Ferragamo Museum. Then the next afternoon the 4 of us hopped in our car and drove to the border where Austria, Germany and Switzerland meet at Lake Constance, taking the funicular to the top of the mountain enjoying the wonderful, panoramic view.

to 10px; width: 400px; cursor: hand; height: 300px; text-align: center;” alt=”” src=”http://3.bp.blogspot.com/_kcTb8DnPVW4/Sk9pZQJU1AI/AAAAAAAADSM/fSbH1qsqExQ/s400/172.1.jpg” border=”0″ />Perhaps it was that very view that inspired our detour for the next day as WG & I departed on our drive towards Italy. As we crossed into Switzerland, I pulled the Europe atlas from the pocket behind my seat to look up the route our GPS was guiding us on, and realized that with a slight detour we could visit St Moritz, a place I’d never been but always wanted to see. As it was June, the roads were clear from snow and ice for the season and the great glacier pass was open for traffic, though around us as we crested the mountains snow still rested on the ground. From St Moritz, we continued our journey south crossing into Italy and arrived just in time for dinner at Bellagio, on Lake Como.

to 10px; width: 400px; cursor: hand; height: 300px; text-align: center;” alt=”” src=”http://4.bp.blogspot.com/_kcTb8DnPVW4/Sk9paIgm_OI/AAAAAAAADSk/GYeCo4PPSRE/s400/257.12.jpg” border=”0″ />The next day we arrived in Florence, just as planned, checking into our “oh so humble” hotel, marveling over it’s great location and noting that a mention in 1,000 Places To See Before You Die doesn’t guarantee the hotel won’t have mildew in the shower. Perhaps it was because the room was less than inviting that we found ourselves meandering the streets of Florence, leaving early in the day and returning late at night.

to 10px; width: 300px; cursor: hand; height: 400px; text-align: center;” alt=”” src=”http://4.bp.blogspot.com/_kcTb8DnPVW4/Sk9pCZuFttI/AAAAAAAADR8/Uyi2EWYb5eY/s400/110.1.jpg” border=”0″ />Mornings were started with a jolt of liquid personality, saddling up to the bar at cafes dotted on the Ponte Vecchio, ordering half-priced cappuccino or espresso (discounted because you drink whilst standing). Sufficiently caffeinated, we dashed to and thro across one of the most amazing cities in Europe. Florence – the birth place of the Renaissance – seeped into my soul, causing a rebirth of my artistic sensibility. We visited the Uffizi, the to/home.html” target=”_blank”>Galleria Dell’Accademia, Il Duomo, and the Medici Chapels, not to mention the Palazzo Vecchio and Mercato Nuovo and Mercato San Lorenzo and to-inet.or.jp/org/orion/eng/hst/gothic/croce.html” target=”_blank”>Church of Santa Croce alongside its famous leather school.

to 10px; width: 400px; cursor: hand; height: 300px; text-align: center;” alt=”” src=”http://4.bp.blogspot.com/_kcTb8DnPVW4/Sk9p5I0-70I/AAAAAAAADS0/fGHAaWCGXXo/s400/357.1.jpg” border=”0″ />We took a walking tour with Art Vivia that was the best walking tour I’ve ever taken and we ate copious quantities of gelato, shopped relentlessly for Italian silk ties and purses made by Florentine leather designers.

In a fit of channeling Fitzgerald, WG purchased a silk ascot for those crisp, fall days we lunch at Lutter & Wegner on the Gendarmenmarkt back home in Berlin. And I worshiped at the altar of Ferragamo, visiting Salvatore’s’ namesake museum dragging WG along in a tit-for-tat moment as he drug me through the Mercedes Museum in Stuttgart a few days prior. Naturally, I can’t visit a city without checking out the antique scene so we strolled through the antiques district and spent an afternoon shopping the Piazza dei Ciompi Flea market.

to 10px; width: 300px; cursor: hand; height: 400px; text-align: center;” alt=”” src=”http://4.bp.blogspot.com/_kcTb8DnPVW4/Sk9pBxVPxaI/AAAAAAAADRs/CaOgaWHPJS4/s400/072.1.jpg” border=”0″ />And we reconnected, my husband of 13 years and I, on this trip celebrating our anniversary. We held hands and made public displays of affection, kissing on street corners and snuggling on park benches, rubbing one another’s feet at the end of the day when we’d walked too much. As we took our car from the valet to start our return drive to Berlin, we were delighted in knowing that we’d be back to Florence next summer when we take my niece Tessa on a Grand Tour for her 16th birthday. When asked what she wanted to see while abroad, Italy topped her list, much to our delight, and we’re already planning next summer’s odyssey to Venice, Florence, Milan and Cinque Terre.

to 10px; width: 400px; cursor: hand; height: 300px; text-align: center;” alt=”” src=”http://1.bp.blogspot.com/_kcTb8DnPVW4/Sk9pZmU5TQI/AAAAAAAADSU/HXn-0ovl7sM/s400/209.1.jpg” border=”0″ />We may not have stopped and smelled the roses, but it was indeed a sensational vacation. One you’ll be reading about for weeks on end these coming months as I post hints, tips and addresses from our trip, telling tales and sharing divalicious photos of Living La Dolce Diva! 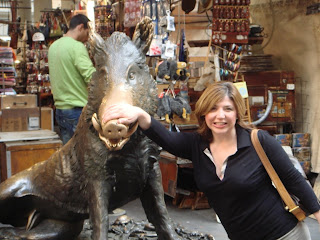