our high school French isn’t as rusty as you think it is…. The name of my favorite flea market is indeed It’s held for 10 days starting next weekend Sept. 28 – Oct. 7 in the Parisian suburb of !

Over 800 vendors from “toute de France” come to Chatou, bringing with them the best assortment of antiques I have ever seen in one locale. Held twice a year – in September and March – this market, like almost all French events, is a Parisian tradition dating back centuries! While I’ve always thought the odd combo of selling pork products and antiques was

a great marketing ploy to get reluctant husbands to go “brocanting” with their wives, the origins of this market date back to the “Moyen Age”. During Holy Week, pork butchers from all over France came to Paris to sell their products. One enterprising butcher decided that he wanted to “bring home more bacon”. So he started selling not only smoked ham, but the equipment for making it as well, offering his clients “the taste of Chatou year round!” The other vendors caught on to the idea and each started bringing with them more and more items, focusing on specialties from their region, namely furniture, pottery and antiques. Before they knew it, “a festival celebrating both the flea market and ham was born.”

Now, I’m still not certain how this pre-Easter celebration became a twice annual event. But I have an un-substantiated personal theory. In August, “tout de Paris” departs for their month long vacation. This is another tradition started in the Middle Ages when the stench from the annual cleaning of the Louvre’s moat (which has since been filled in) forced the citizens to flee until the gag reflex-inducing cleaning was over. This is where my part of the theory comes in to play. I believe that when the Parisians fled to the country, they found they enjoyed the country life so much that they didn’t want to return. Paris had to do something to lure them back! So I think they used the “Foire aux Lards” (or Fair of the Fats) – as the festival was then called – as an olfactory pied piper to lure them, salivating, back to the city. While this might smell a little fishy, .

What ever reason the festival is now celebrated in the Fall as well as the Spring, The Antiques Diva ™ couldn’t be happier to have the opportunity to shop two times a year – and my purse needs the rest time in between to recover from the inevitable damage I do each time I visit the brocante. If you don’t have time to go to Chatou in the next few weeks, you must definitely plan a trip to Paris in March for their next event! As soon as the dates come available, you’ll be the first to know. And once you’ve visited Chatou, you’ll come back and fall at my feet, thanking me for the introduction to what will soon be called “your favorite flea market”. 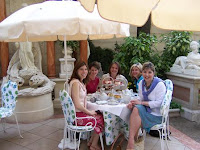 sensational letter that has simply done my job for me!

So, TTFN from me,

The Antiques Diva and Greetings from Lady Lotus!
(seen right, with she and I flanking the table in the garden of the Paris Ritz. La Reine sits to my right and The Colorado and Tampa Girls are in the center)

I almost started crying when I received the invitation to “Chatou” that had been forwarded from our address in France to our new home stateside (sent to me because of my frequent purchases at the fair). What was my husband thinking moving me so far away from the best brocante in the world??? I’m not a huge antique shopper, but for the six years we lived in Paris, I would drop everything when Le Foire Nationale a la Brocante et au Jambon rolled into town.

My home IS Chatou … from the desk I’m sitting at writing this letter (a gorgeous Napoleon III bureau en noyer with black leather top) to the round, marble-topped coffee table where I sat my coffee cup this morning!

I still remember my first time. My friend Roxanne and I took the RER A train 10 miles from Paris Charles de Gaulle station to Chatou-Roissy. We followed the signs to the entrance arriving at a field (3.5 hectares to be exact) of green market tents. I remember thinking that the 40 francs (probably $6 at the time) charged was quite a sum to pay just to go spend more money on stuff I probably wouldn’t like. Well, I’m not sure if it was the smell of smoked ham in the air or the many vendors who answered my poorly-worded novice questions with kindness and smiles, but I fell in love with a 19th century buffet made from cherry wood and walked out feeling richer. Of course, my economist husband pointed out that spending 7,500 francs on it made us poorer, but luckily I couldn’t hear him over the sounds of the piece being delivered into our 16eme arrondissement apartment! 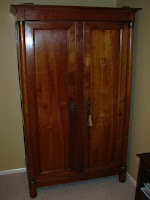 Over the years, I got quite adept at negotiating delivery in the purchase price. That came in handy when I bought a huge cherry wood armoire from the Restauration époque. I know that era isn’t very popular in the antique world, but I absolutely love the simple lines, light colored wood and tiny bronze empire cuffs. The currency had changed by then, so it cost 2,000 euros. Last month, I saw a similar one here in the USA priced at a whopping $10,000. 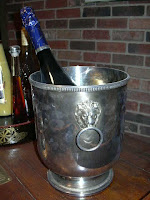 Of course, I haven’t always bought big stuff. One year I came away with only a silver champagne bucket that was about 50 euros. I hate polishing it, but the decorative lion heads on the side just look superb as they guard my tasty bottles! I also remember another purchase, a small bedside table from the that cost 250 euros. As my husband carried it up the escalator at Charles de Gaulle-Paris, the drawer fell out and bounced all the way down the moving staircase. Luckily no one was hurt (other than my husband’s ears as I yelled at him) and the additional dents just made it look even more authentic! 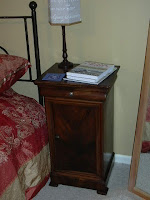 The last time I went to Chatou, I knew we were getting ready to move back to the USA . So, I scouted out four items I liked – two commodes, a round coffee table and rectangular side board. All four items were topped with black and gray St. Anne marble from the 19th and 20th centuries. I returned with my husband so that he could make the final selection, but instead of narrowing it down to one as anticipated, he negotiated with the vendor to sell us all four pieces for roughly 3,000 euros. I think I laughed for three straight days, but I guess that is proof I won’t be the only one of us that is going to miss shopping at Chatou. 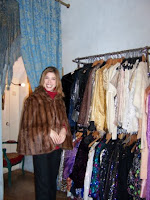 Happy hunting to those of you lucky enough to attend this year! I envy you.

If you have a Chatou Shopping Success Story you’d like to share, please email (and include photos and prices if possible) to