to 10px; CURSOR: hand; TEXT-ALIGN: center” alt=”” src=”http://3.bp.blogspot.com/_kcTb8DnPVW4/R1xKX35Z-VI/AAAAAAAAAiQ/2wC8iRhswIc/s400/great+wall+of+china.jpg” border=”0″ />I’d like to say that I’m on the next flight to China but, sadly, my husband, WG, is Beijing Bound without me! Perhaps he’s leaving me at home because the last time I went with him on a business trip, I shopped a little too much for his liking! This afternoon he’s packing his bags, and though he claims he’s going to Asia for an important, international business meeting, I doubt the seriousness of this journey. He’s packing an awful lot of street clothes and guide books in order to attend the type of meeting that usually doesn’t allow time to even leave the hotel for the duration of the event!

As often as WG travels, he is usually stuck inside one hotel or another and often forgets which country he is in, needing to read the hotel brochure when he wakes in the morning to remember whether to kiss, bow or shake hands. That said, each December WG’s team at work celebrates the end-of-the-year with a conference in an exotic locale – and from my perspective, these conferences are more about an end-of-the-year-party than actually doing business! At last year’s party, WG called me from London to wish me goodnight from a private cruise on the Thames as was opening to let his yacht pass and fireworks were exploding overhead. This year I’m expecting a phone call from the Badaling portion of The Great Wall. If I know WG, he’ll be doing Nixon impressions, muttering Richard’s infamous phrase “It sure is a great wall” and I fear my Christmas stocking might be stuffed with an “I Climbed The Great Wall” t-shirt. While his mornings might be filled with lectures on “Doing Business in China” and tours of client sites, his afternoons are packed with outings to The Forbidden City, Tiananmen Square and The Temple of Heaven.

Don’t get me started talking about the nights… Dinner the first night will be nearby WG’s Beijing office in his lavish hotel, The China World Hotel, which hosts some of Beijing’s best restaurants. One night WG has managed to finagle an invitation for a private tour of The Bird’s Nest, followed by dinner in the area – on the next, he’s been invited to a traditional Tea House for some authentic tea rituals. 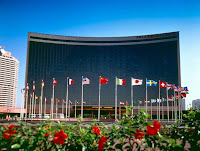 The coup de grâce, if you will, is dinner at the Hepingmen Roast Duck restaraunt, a culinary treat WG’s described to me repeatedly as he awes over the art of a perfectly roasted duck. Beijing Duck (also known as Peking Duck for obvious reasons) is served with thin pancakes, plum sauce and slivers of scallions and cucumbers. You dip the duck into the sauce and roll it up like a pancake with the garnish resulting in a mouthwatering combination of the cool crunchiness of the cucumber contrasted against the sharpness of the scallions and the rich, delectable flavors of the duck! On his last night in China he’ll be dining on paper plates at the Donghuamen Night Market where grasshoppers, chicken hearts, yak butter and kidney are prepared while you watch and served straight from the grill – hopping hot! 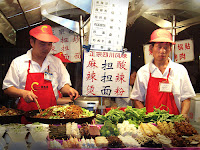 While all this food sounds incredible, the thing I am most saddened to miss out on is the Panjiayuan Market, whose name translates to “The Dirt (or Cheap) Market”, where next Saturday WG will spend the day scouting for a perfect Christmas present for his lovely bride whom he has forlornly abandoned at home in Holland. Here, amongst 3,000 vendors and 50,000 visitors, WG will haggle and barter for genuine Asian antiques (though I have warned him to be weary of anything that is stamped with the word “genuine”)! He’ll also find Cultural Revolution memorabilia as well as Chinese Arts and Crafts. 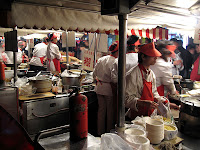 Though I’d prefer an antique for Christmas, I’d be willing to accept a vase from Beijing Curio City, or better yet something in silk from Xiushui Silk Market. Perhaps I should be whispering the words “freshwater pearls” to WG as he sleeps, then surreptitiously sneak the address of Hongqiao Pearl Market in his pocket.

I haven’t figured out how he could get it home as pewter tends to be a bit heavy for the luggage, but a friend turned me onto a shop called Tumasek, which carries beautiful, gleaming goblets, trays and chess set
s all made of Malaysian pewter!

Perhaps a more packable present from China would be a set of calligraphy brushes – but, as I am a diva, not any brush will do. I’m dying for 3 new brushes – a weasel hair brush, a goat’s hair brush and a wolf’s hair brush – all of which are essential for perfecting my calligraphy. These, of course, can be purchased at Rongbaozhai, a typical state-run store, which is a bit of a disaster inside but has an excellent selection from which to choose! 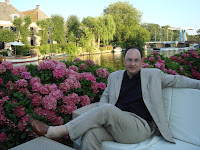 With all this shopping WG’s set to do, I wonder how he’ll find any time to do business in China? Such a pity he isn’t taking me along with him, I could have saved him a bundle of time, scouting out my perfect present and perhaps even purchasing it for myself on his behalf leaving him plenty of time for work, work, work!

Until next time, keep your fingers crossed that I get a killer Christmas present out of this blog!