top: 5px; float: left; color: white; background: #781300; border: 1px solid darkkhaki; font-size: 50px; line-height: 40px; padding-top: 1px; padding-right: 5px; font-family: times;”>As part of our “Back to School with The Antiques Diva” series this month, I wanted to give you a little background on a piece of furniture that all students use— the desk! This once strictly utilitarian object has transformed over the centuries to become not only functional, but also a beautiful addition to any home. 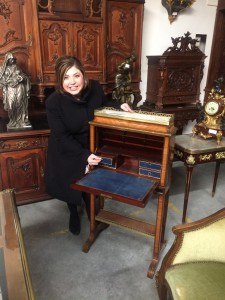 Long before the printing press was invented, anyone who wanted to have a written record of anything—be it a story, a legal document, or a personal letter—had to sit down and hand write it. Imagine if you wanted 50 copies of something! They all had to be hand copied! This required plenty of surface space as well as various slots to hold writing tools. Because many manuscripts were large and heavy, most desks or writing tables of this early period were large and hefty. 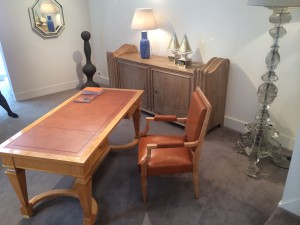 As time progressed and carpenters honed their skills, desks began to take on a bit more of a decorative feel. Drawers with dividers in them were added to writing tables with room for inkwells, blotters and feather pens. Desks of the Renaissance period began to have more delicate features as opposed to the massive desks of previous generations. 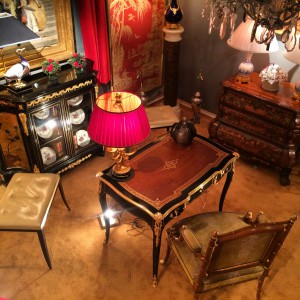 From about 1700 onward, desks could also be referred to as bureaus. These were sloped desks with drawers below and were often used by civil servants and scribes to copy legal documents. As societal class structures were an important part of life at that time, nobility and the upper class desired a different desk style to write their own personal letters on. This is where the secretary desk came in. Secretaries have a tall hutch atop the desk portion with a lid that can be lowered into a writing surface. The upper cabinet often holds books and other writing accouterment. 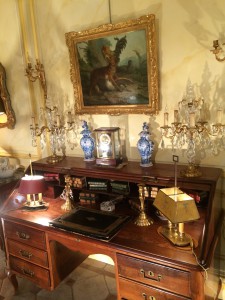 Of course as professions became more precise, the desk evolved. Architects needed larger, angled surfaces to create plans, and these desks became what we refer to today as the drafting table. Professional office workers required dividers and pigeon holes to stay organized.

By the 1800’s, the pedestal desk became the standard type of desk in England and America. It still holds a very popular status today! You can find pedestal desks being used by anyone from an office assistant to the President of the United States. I suppose the idea of class-distinction from the 1700’s no longer applies. Talk about full-circle! 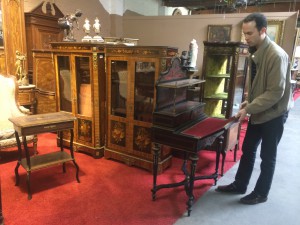 Like any piece of furniture, desks have evolved with the lifestyle and needs of humans. The great thing about antique desks is that many of them that were made before the Industrial Age were hand crafted and are of excellent quality, making them good investments. Now, I think it’s time for some more homework!