top: 5px; float: left; color: white; background: #781300; border: 1px solid darkkhaki; font-size: 100px; line-height: 90px; padding-top: 1px; padding-right: 5px; font-family: times;”>An Antiques Diva reader recently left a comment on a blog I wrote about Flea Market Dogs and her comment so captured the essence of Paris that I asked if I could share her comment as a blog post! 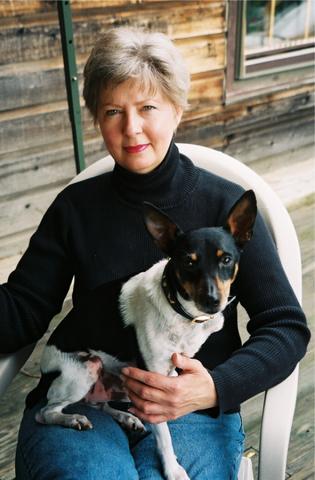 Rebecca writes:
On my first trip to Paris (circa 1976), while enjoying dinner at Le Train Bleu, I noticed a beautiful Bull Dog at the next table – he was known by the waiter and his service dishes were on the table  – not under it!  He sat at the table as proper as any human could, and sad to say, better than most people I know today.

On another day we stopped to have lunch at a small crowded sidewalk café.  I squeezed into the back seat of a tiny table (I could squeeze into things back then!).   For the entire time we were there, a red Dachshund doggie, being held by his mistress, snoozed with his head on my shoulder.

Photo credit above:  from one of my favorite blogs, “Paris at a Certain Age”

On my more recent trip to Paris – in particular those to the flea market – I was amazed to see a dog wandering thru and lifting a leg on a high-end antique.  I fully expected to hear a proprietor scold as only the French can do… but there was no reaction.  It was eventually wiped off the furniture but no one appeared distressed.  I came to the conclusion that perhaps this only added to the patina!!

My trips abroad are short because I have animals I don’t want to be away from. At the time of one of my trips, I was owned by a little Rat Terrier named RT (see photo at top). RT was a handful! When I spotted the beautiful little creature in the shelter, I knew he would be back and forth to the shelter unless I to the shelter, or worse, unless I took him home. I still have the image of a little “RT” in Paris trotting down the street and wishing how my RT could be there too! I think Paris would have been his kind of town!

Today’s post is in memory of RT. As Rebecca explained in an email to me about her adorable rat terrier, “He would be so pleased to be remembered in this manner. I had to put him down due to diabetes – it nearly killed me. He was such a character. He also perked up when I practiced my few words of French; in particular “BONE-jour”!

To all dogs full of French Spirit regardless of which side of the Atlantic they roam, I wish you “BONE-jour”!

The Antiques Diva
(seen below in my alter-doggie-ego) 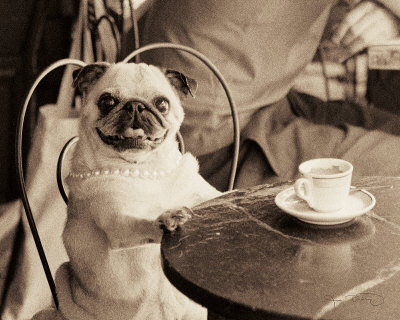