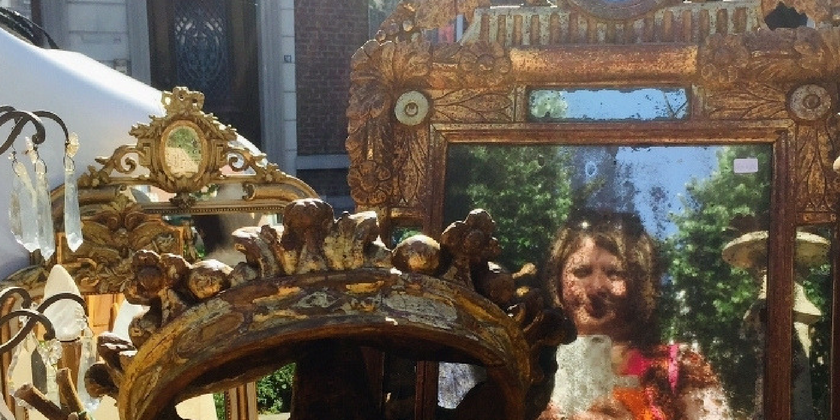 Flanders is the perfect tour for an antique dealer seeking to stock his store. Flanders offers many off the beaten path sources for antique shopping and a slew of trade-only warehouses and private sellers. Our local expert Antiques Diva Guide picks you up at your hotel and takes you antiquing in Flanders to our favorite vendors, exposing you to bargains on Napoleon III pieces as well as special finds from the 18th to 20th centuries. Flanders is one of our go-to destinations for antique dealers on the antiques trail. Booked in conjunction with several days on a South of France or England, this tour is ideal for antique dealers. One of my personal favorite antiquing destinations, Antiques Diva Flanders antique buying tours are sure to please!

Flanders s the Dutch-speaking, northern portion of Belgium – where the local language is called Flemish. (The French-speaking part of Belgium is called Wallonia.) Antwerp, Bruges, Ghent and Tongeren are some of the best-known cities in Flanders. Today’s Flanders has been a part of Spain, France, Holland and Austria, and with its varied past was influenced by the whole of Europe in its furniture design. The region had a reputation for tolerance so refugees fleeing religious persecution settled here, bringing with them their own crafts and customs. For example, 17th C Flemish antiques have a Spanish influence as many of the craftsmen making furniture in Belgium at that time were Spanish refugees.

Flemish furniture was popular in and exported to England, where you still see it in many country homes – oak, heavy and with elaborate carving and the distinctive Flemish S scrolling. Over the centuries so many different people found refuge in Flanders, and today you can find many different styles including Louis XV, Louis XVI, Empire, Napoleon III, Spanish Colonial, Henri II, Willem III, Gustavian, Louis Philippe, Chippendale, Rustique, Baroque, Neo-Baroque, Lodewijk, Queen Anne, Bretonne… and more! 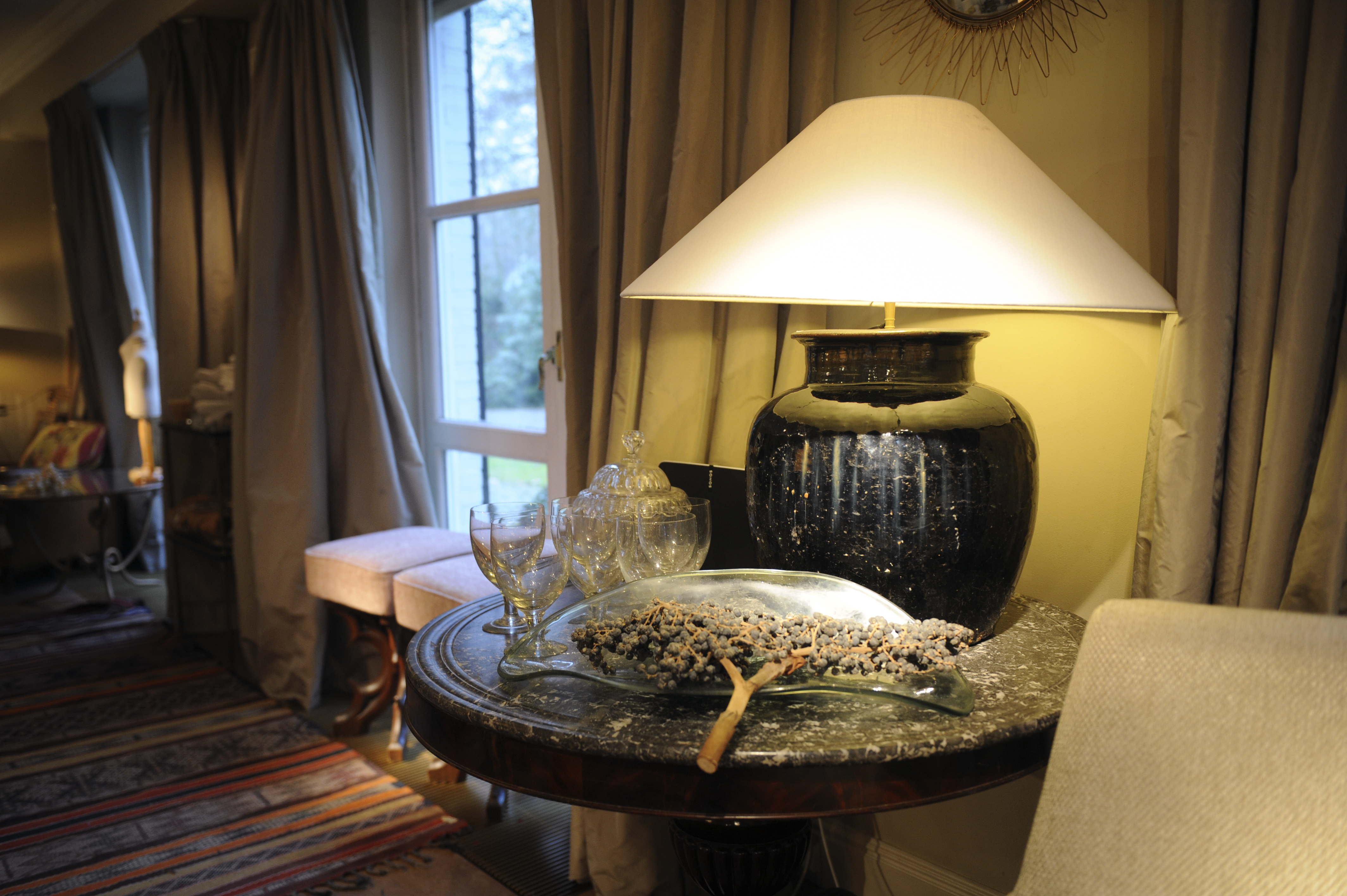 In Flanders you will find pieces from many periods and designs to meet any need – and our Diva Guides will who the best dealers, wholesalers and private sellers are:

If you need to shop for antiques but don’t have time to travel to Europe, Antiques Diva Buying Services will work with you to source, purchase and ship pieces that meet your exact requirements. 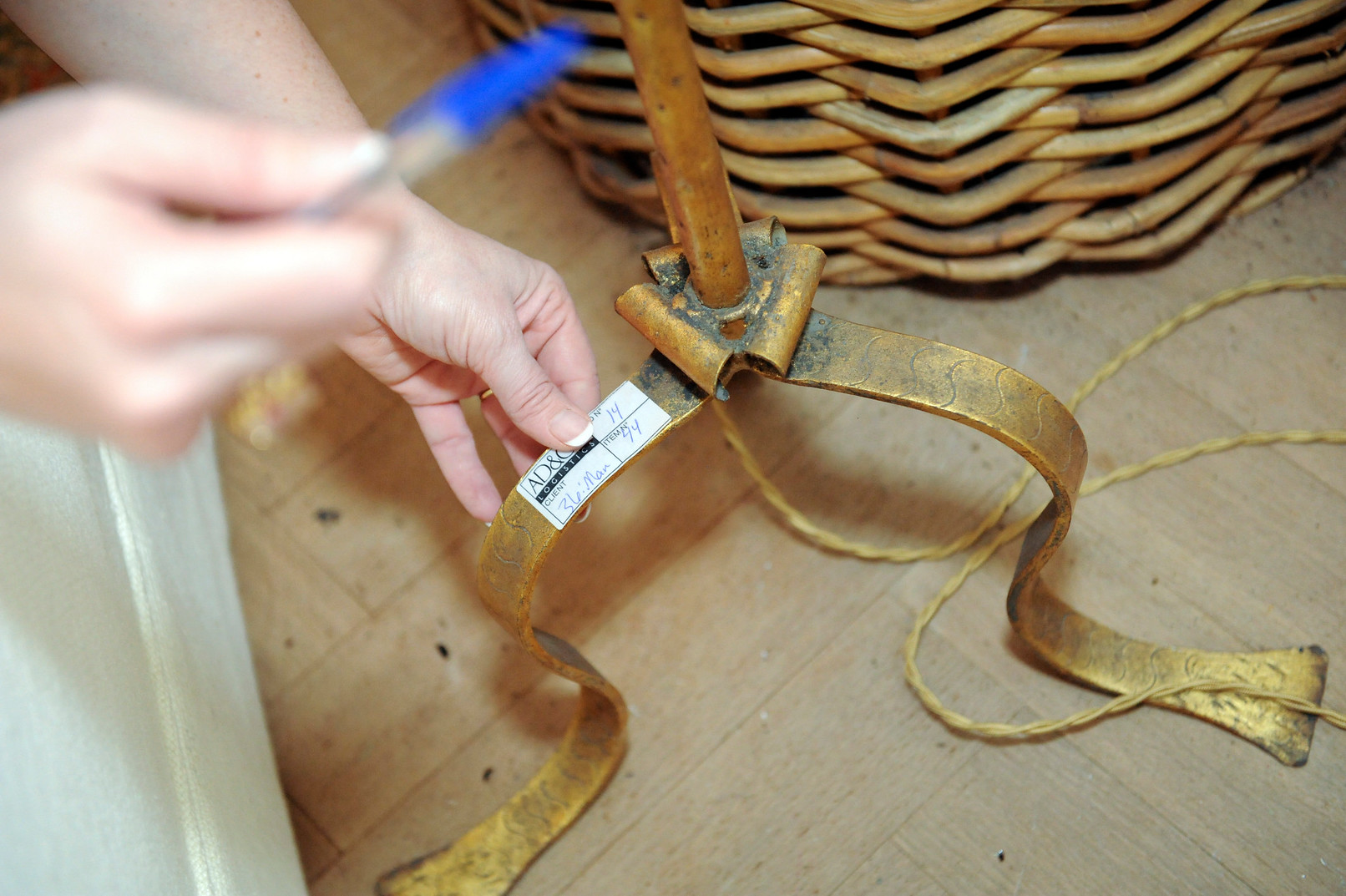 Bruges Zandfeesten is one of the largest flea markets in Belgium, held three times per year: the 1st Sunday in July and August and the last Sunday in September – and its crowded with locals and tourists. Tongeren’s Sunday morning flea market has been booming for over 30 years, with bric-a-brac and curiosities as well as serious antiques. Many antique lovers are familiar with Brussel’s Sablon district with its amazing antique shops and galleries, but there is also a Brussel’s weekend antique market and a daily flea market on the Place de Jeu de Balle in the Marolles district. Your Antiques Diva Guide will create a custom itinerary based on your antique shopping requirements, budget and schedule that takes you to flea markets, small shops and dealers, antiques warehouses and private homes where the owner’s collection are available for sale. 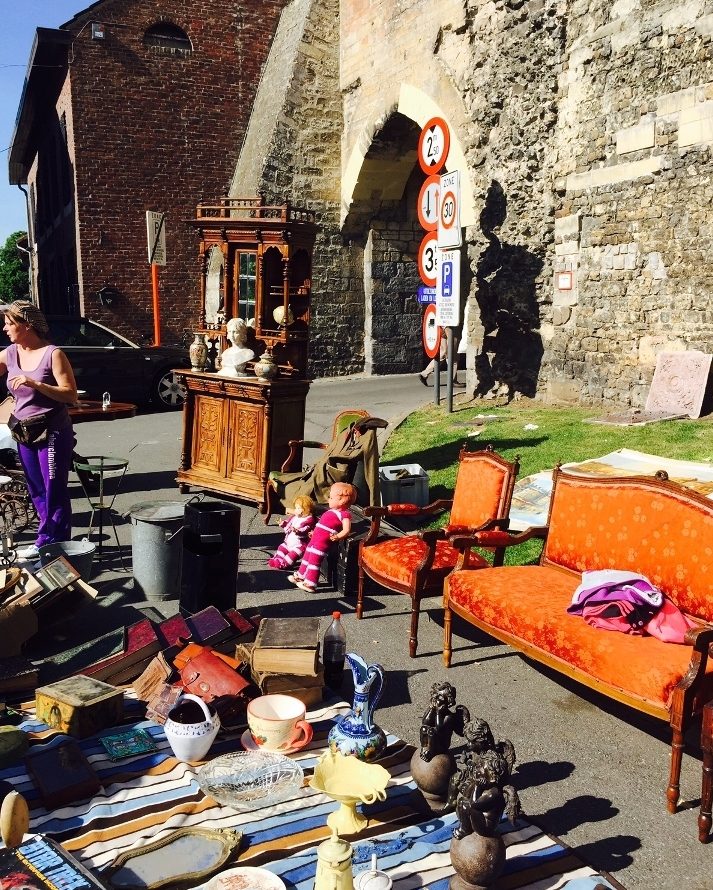 Our Antiques Diva Guides are local experts – they know the dealers personally, have long-standing relationships with them and have sourced antiques at their shops for many years. Shopping with The Antiques Diva gives you insider access to the best antiques at the best prices. You have the shopping power of all our clients behind you – when antiques dealers see The Antiques Diva, they know we mean business! Our guides will translate, negotiate and help you find exactly what you are looking for, at a price you can afford. Then, we will help you ship it home either through our Antiques Diva shipping services partner or with your preferred shipper. 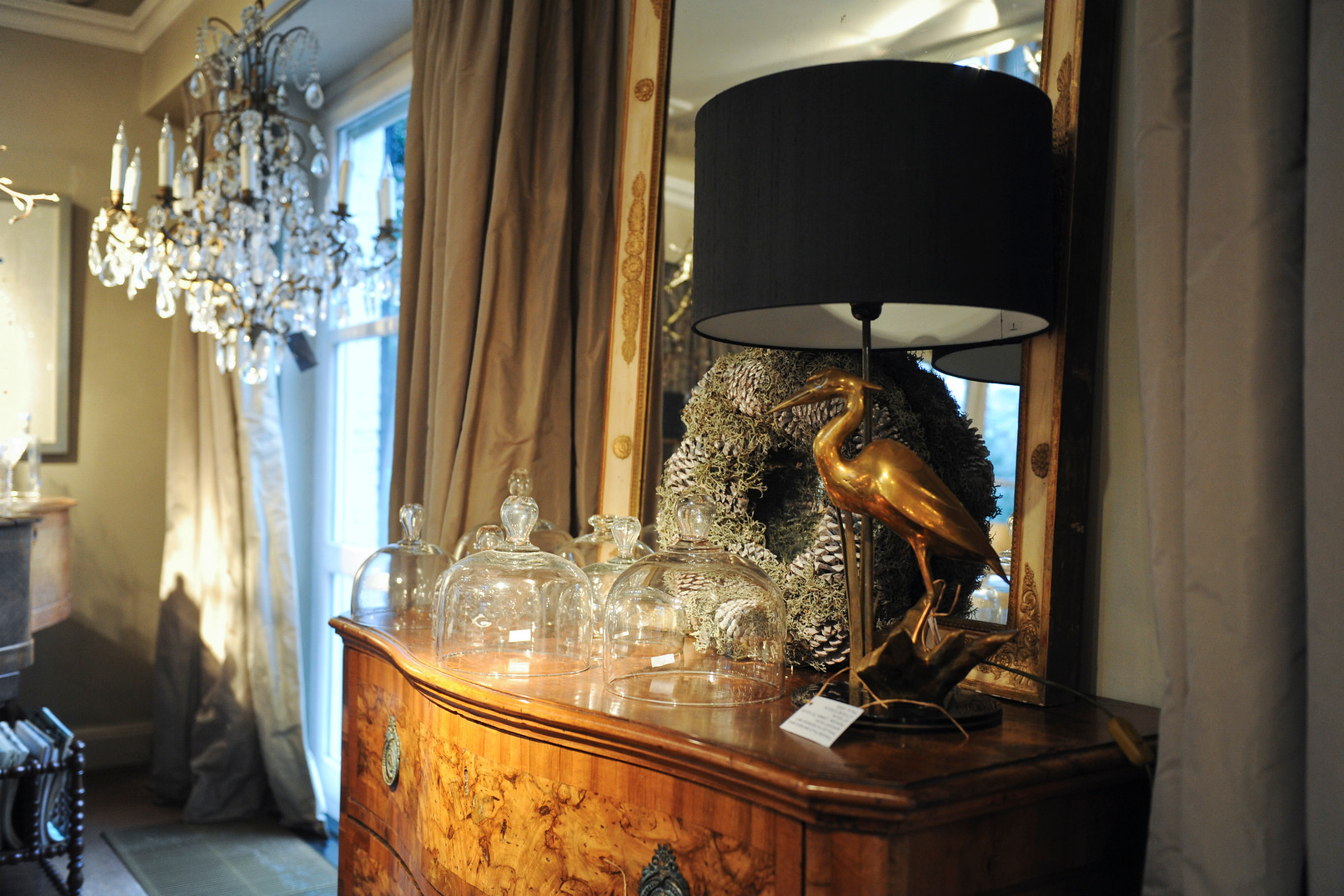 Flanders is a full day antiques tour and is available Tuesday – Sunday – and schedules perfectly with a France or Sweden tour!

top: 5px; float: left; color: white; background: #781300; border: 1px solid darkkhaki; font-size: 60px; line-height: 50px; padding-top: 1px; padding-right: 5px; font-family: times;”>Though it is a tiny country, Belgium is bursting with antiques from all over. In fact I sometimes wonder what the per capita antique dealer is when compared with the total population of residents? We are constantly taking clients on Antiques Diva tours throughout Belgium and also offering Antiques Diva Buying Services through many of our sources there. And while French finds and gorgeous Swedish pieces are found in abundance in Belgium – alongside a slew of bric-a-brac – one type of furniture original to the area is the dark, heavy oak 17th C Flemish antiques. Often seen as stuffy when paired in matchy-matchy sets, these pieces are making a massive comeback when paired with modern interiors, clean spaces and abstract art. 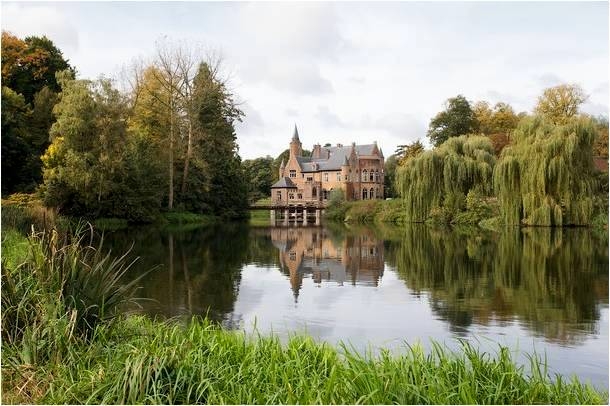 With a checkered history The Low Countries – what is today both Belgium and The Netherlands – were once part of Spain, France and Austria.  Today when we talk about Flanders it’s the Dutch-speaking, mostly northern portion of Belgium. Incidentally, do you know what French-speaking Belgium is called?  10 points if you get this one!  Give up? It’s Wallonia!!  Now Belgium with its varied historical past was influenced by the whole of Europe in its furniture design –  the region had a reputation for tolerance which meant refugees fleeing religious persecution settled here, bringing with them their own crafts and customs.  Which means if you want Spanish Colonial Antiques? Well… 17th C Flemish Antiques can fit that bill as many of the craftsmen making furniture in Belgium at that time were Spanish refugees and the craftsmanship is quite similar.

During the 17th century, Flemish furniture had its hey-day. It was exported to England where you will still today find country houses heaving with Flemish pieces. They’re typically made of oak and have a rather heavy appearance. However a distinguishing feature of Flemish furniture is a plethora of elaborate carvings. The juxtaposition of the heaviness of the pieces and the intricate carvings makes Flemish furniture quite unique. A great way to introduce this into your home with out adding too much weight is with a mirror such as this one found on 1st dibs!  The carving is positively architectural – it’s a great example of what the Flemish were doing in the 17th C. 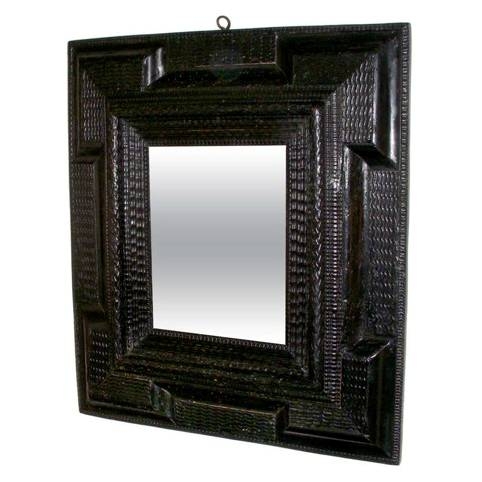 Or what about this trunk from Online Galleries?  Imagine it paired with a clean linen covered sofa – wouldn’t the inlay and carving pop – if paired with something simple to counter balance it?

Another prominent feature of the Flemish style is the Flemish scroll, an S or C curved ornamental form in which a scroll is broken by an angle. You may also find what is called a Flemish foot which is a scroll-like ending to an S or C curved leg. This Flemish scroll was not only used in Flemish Renaissance furniture, but also can be found in the English Charles I & II and William and Mary styles.

Flip through the pages of any shelter magazine and you are bound to see Flemish antiques or, at the very least, their influence.  Here lately, in both Architectural Digest and Veranda, I’ve spotted a few! This 17th C Flemish Table up for sale at Christie’s recently has Axel Vervoordt written all over it.  Can’t you see this pair with some luscious Belgian linen covered chairs and religious candelabras? By the way – ever wonder WHY there were often balls midway up on the legs of antique tables? To keep the mice from running up them! 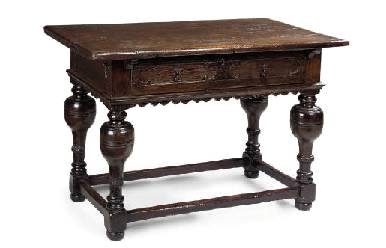 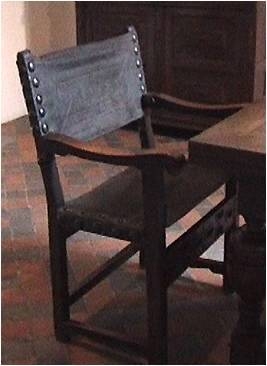 Whether you fill a room in a historic home or simply use one piece of heavy Flemish furniture to ground a more modern space, the Flemish style definitely adds character and interest with its various carvings and its unique attributes. If you’d like information on taking an Antiques Diva tour or wish to inquire about our Buying Services, email us at to:info@antiquesdiva.com”>info@antiquesdiva.com. 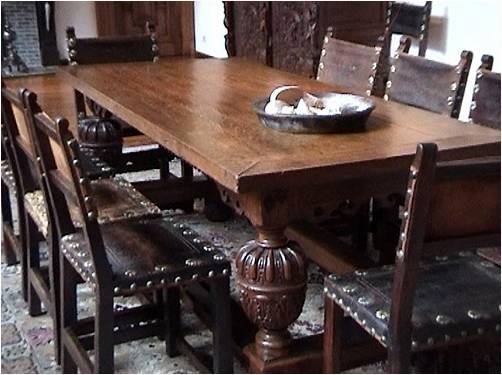 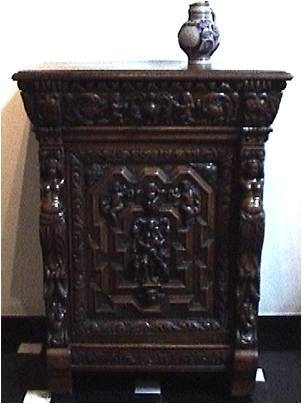 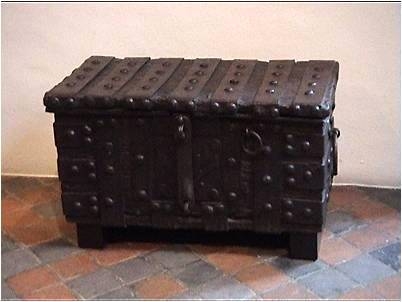 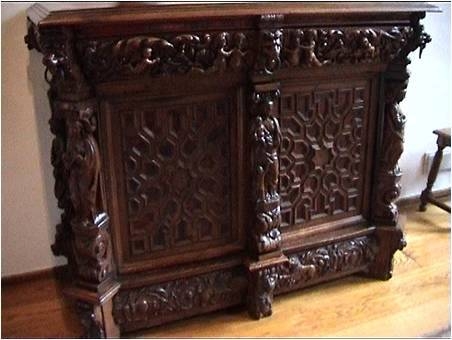 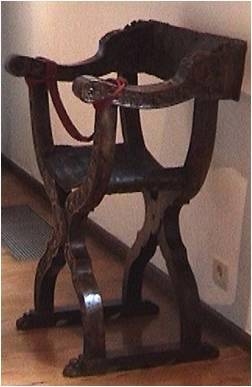 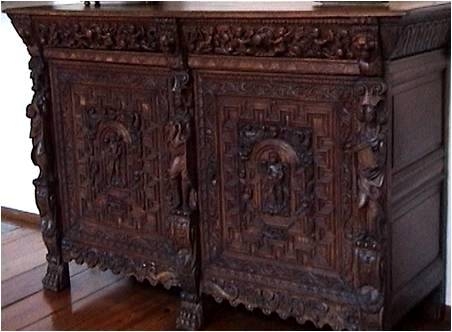