top:2px;padding-right:5px;font-family:times;”>When author Saxon Henry tells you she’s going to write a glowing review after you’ve spent the most enjoyable day together touring Paris, you’d better believe her! If I could have written the review of my Paris Tour myself, I’m not sure I could have been any more exuberant! And, dear readers, you know me – I’m always gushing with exclamations – especially when talking about my favorite subject – me! 😉

I’m blushing like a school girl after reading what Saxon Henry & Roaming by Design had to say about The Antiques Diva Shopping Tours in Paris!

“When The Antiques Diva™ tells you that she will have you shopping until you drop, you had better believe her! Accessories goddess Patty Otis Abel and I spent a day in Paris with the daring Toma Clark Haines, the Diva herself, and were just about to the point of crying uncle when she breezed us right into The Ritz and straight into the Bar Hemingway! After one of head barman Colin Field’s French 75 cocktails, which he claims are the perfect balm for soothing fretful feet after a day of shopping or sightseeing, we were nearly as good as new…. “ Continue Reading… 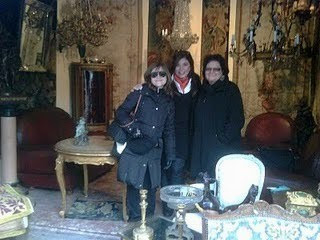 Merci Saxon – Shopping with you was a Diva’s Dream Come True!

MEET THE DIVA OF THE DAY:

Henry’s second book, Four Florida Moderns, was released by W.W. Norton & Co. in February 2010, and her blog, Roaming by Design, brings travel-related design subjects from around the world home. The journalist/author is a member of the American Society of Journalists and Authors.