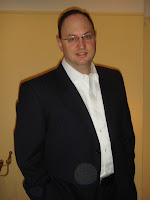 top:2px;padding-right:5px;font-family:times;”>On Friday afternoon, WG rang my mobile requesting we depart for Paris the next morning. He had urgent business in the city of light and needed to go at once. Last month when we were in “gaie Paris”, hitting “les soldes”, WG had ordered a suit to be made from his favorite French tailor. Ironically, his favorite French tailor, Mangas, though located just down the rue from Trocadero, is a Spanish brand and though the suits are fitted in Paris, the work is shipped off to the Costa Brava where the labor rates are lower. A few sunny weeks after the fitting, Mangas suits are made to order and waiting back at 33 Rue de Longchamp as if they’d never traveled abroad.

On Friday at 3pm, WG received an email essentially saying, “Vite, Vite – Votre costume est prêt!” As he was dying to show off his flashy new finery when he speaks at a conference in Stockholm next week, he didn’t 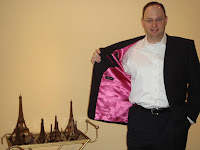 want to wait a second longer than necessary. Though I’d helped WG select the made to measure ingredients, mixing his suit recipe, I still had to smile when he modeled the finished product. It was typical WG – on the outside it had that “conservative-pin-striped-London-banker-look” but on the inside there was a party going on. He’d chosen to line this suit with the same shade of shockingly raspberry silk as the interior of my LV Viva Cité sac. Somehow I suspect my father in Oklahoma wouldn’t approve of the interior, but between you and me, it is chic, chic, chic! 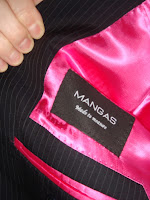 A new suit justified a new shirt. We dashed from Mangas in the 16eme to ton.com/#” target=”_blank”>Café Coton in the 6eme, which is not a contender in the to-z_1978/society_1987/parisian-cafes-and-terraces_6836.html” target=”_blank”>famous St Germain des Pres café literary society, but instead a men’s dress shirt store. It’s a tiny little boutique, located at # 3, rue de l’Ancienne Comedie, where their sales are down right sinful, the staff young, hip and jovial and the chemise’s made of excellent quality . The colors do not fade and the quality of the cloth is down-right superior to most of their competitors. Walking into Café Coton is like walking into WG’s wardrobe and I couldn’t help but point out that WG was struggling to find a shirt in their inventory he didn’t yet own. Alas, on this last weekend of the famous Parisian winter sales, he found 2 shirts with a 50% off tag – a virgin blue pin-stripe with French cuffs and a white Italian-collared shirt that he already owned a few replicas of but had practically worn out from frequent wear.

Clothes make the man. Naked people have little or no influence on society.

As I fingered a tie, thinking about the store I wanted to go to around the corner, I inquired, “Suit purchased and new shirts in place, do you need new shoes, socks or ties?” But WG, who was enjoying this impromptu weekend in Paris even more than he’d expected, said “No, let’s save that for another surprise weekend away.” Afterall, this would give us an excellent excuse to return to Paris to finish his Spring wardrobe shopping. As I slipped my arm through his, smiling from ear to ear, I whispered, “We’ll be back Paris…”