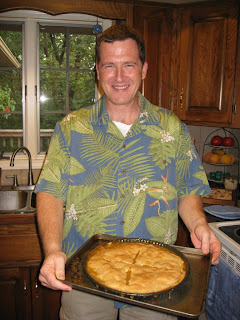 Regular Diva Readers know how I adore the twice annual 10 day tou/foire/acc.htm” target=”_blank”>“National Fair of the Flea Market and Ham” held in the Paris suburb of L’ile de Chatou. You’ve heard me tou” target=”_blank”>wax poetically about this market on numerous occasions and in numerous publications and you’ve even read a guest blog from Lady Lotus on the subject. Now, Lady Lotus’ husband, The Professor, has taken time to add his 2 cents in this blog titled:

top:2px;padding-right:5px;font-family:times;”>When a man says something about getting wood, some minds may wander down more prurient paths. Clearly, these people have never been shopping for antique wooden furniture at Chatou, the grand antique bizarre to the West of Paris. 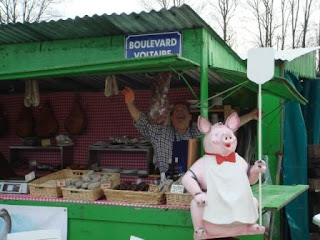 The real pleasure may not be shopping for some table made of an old worm-eaten bit of bark, but instead the ham. The very name of the event, Chatou Foire au Jambon (Chatou Ham Festival), tells the tale: the event is not merely for dainty antique-o-philes of stereotype. It is also – even primarily – a place to go for ham. Ham choices are various. They include a ham sandwich that is so piled with add-ons that it is a food grenade for anyone who dares try to eat it while wearing good clothes. There is usually some form of ham-and-cheese mixture in a hot pot, typically to be served with boiled potato slices. Roast ham is everywhere. So, too, is a selection of mostly white wines and beers. All this is central to the market, self-righteously occupying the central rows of the grounds. 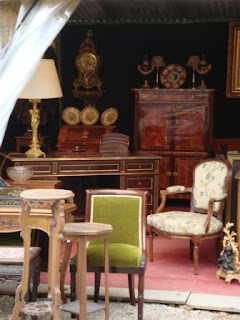 The antique shopping itself is rather enjoyable, possibly because the goods for sale are not antiques by French standards. In France, an antique is old. The people in the paintings on sale at a real antique market died before your great-grandparents were born. At an antique shop, “second empire” is hardly old enough. There, a chair on sale might have last suffered an ass more than a hundred years ago.

The market at Chatou is a brocante, which might be something like a junk sale to the blasé French. “What, less than a hundred years old? Mon dieu, it’s still trash.” The objects for sale at Chatou, excepting the ham of course, tend to be anywhere from a few decades old to a few hundred. This garage-sale material from France may be mouthwatering to the shopper from the Western US, where some states themselves are not quite a hundred years old. At lunchtime, the merchants shamelessly sit on the very chair you might want to buy and spread their hams and drinks on the table you are eyeing. “Excusez-moi, but would you try not to get any condensation rings on the table I am buying?” 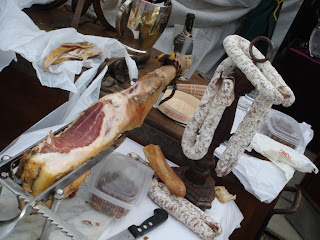 There are challenges of shopping at Chatou. First and foremost, there is the fine balance between eating and drinking too much and effective shopping. Clearly, every man must face this burden in his own way. My preference is to arrive in the morning, shop for a while, and end with a late lunch.

This sequence leads me to throw caution to the wind when choosing my heaps of ham and accompanying liquids as my shopping is finished. After that, I am useless for shopping and it’s time to nap my way back to Paris by train. The only interruption for the rest of the day is my own quiet belches – and my wife nudging me and telling me to stop belching, even quietly. 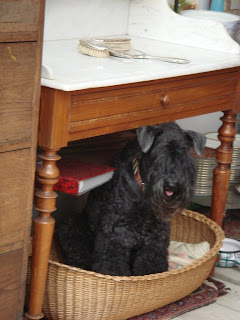 The second challenge is the shopping. This entails two steps: scouting and negotiating. I particularly enjoy the scouting part because I cheat. My wife, knowing that I am a lousy shopper, will have already scouted at the event with more patient friends earlier in the week. This may seem bizarre: why, this man wonders, would anyone go shopping twice? I’d go twice for the ham, but not for shopping. Perhaps it is a mystery of the universe not to be solved here, but why do women bother to identify the things they want to buy, but not buy them? Yet she claims to enjoy this method. I enjoy not scouting.

The negotiations can be a chore. It typically starts before you know it. By the time you have come within 10 meters (must be metric in France), the merchant will have sized you up and decided how much can be wrung from you. As a visitor from the US, you are stamped with the word “sucker” until you prove otherwise. This can be accomplished by showing a modicum of appreciation for the object in question, rather than a lackadaisical interest as might suggest itself when your wife’s fancy falls on some frilly whatever that you know will mock you from the wall beside your television until you accidentally break it while she is away. Speaking a bit of French is always welcome, even if the negotiations end up devolving into typed numbers on a calculator for want of any real foreign language abilities on either side. 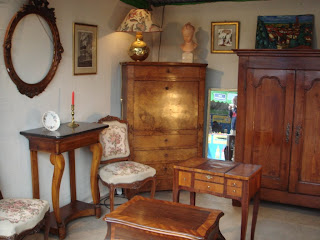 The verbal negotiations are fraught. Just how much is the thing worth – taking into account the type of wood, the Louis-Philippe style, the crack on the side, the evidence of worm damage, the replacement of the handles, and so on – is irrelevant for most people. As we usually plan to keep it, the question is how much it is worth to the buyer and whether or not
we can get it cheaper. This requires seeing the prices on comparable pieces at the market and some pre-negotiation negotiating among the buying spouses. 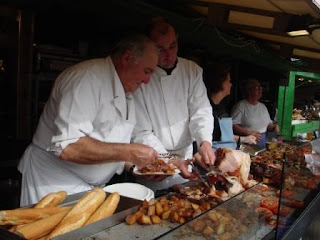 Chatou negotiations tend to be good natured as far as such things go, particularly as compared to, say, the markets of Marrakesh or the rug merchants of Istanbul. But the vendor would probably be willing to let you pay much more than you should. Negotiations can often be complicated if you add in an object mid-way through. However, one will ideally have identified any “throw-in” beforehand lest, as in the case of one infamous shopping expedition, one’s wife identifies some trinket off-hand that leads the merchant’s eyes to widen as multi-digit price calculations race through his mind. 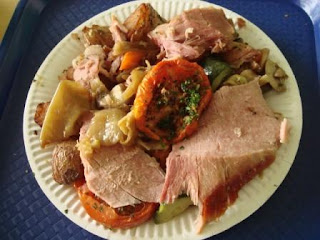 The third challenge of the shopping expedition is getting the object home. Even for ex-pats in Paris, this can be a bit of a chore, as anyone who has tried to arrange their day around a typical French delivery time knows. The statement that the delivery will be “sometime next Wednesday” often leads to boring days awaiting a delivery, rescheduling after they do not show up, and so on. For the international traveler, modern airline restrictions may constitute more than a mere nuisance. For example, I was quite concerned that the airline staff would not let me carry an old cane with a brass handle onto the plane. Fortunately, it passed the test: one staff person glanced at it, then rapped it against her own head before judging that it was safe. The challenge of getting the loot home would be amplified if one sought to buy some nice big armoire of walnut with mirrored front doors. 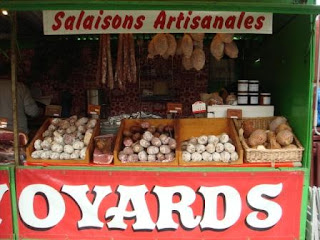 Chatou is a place to go for ham, drinks, and old stuff. It can be a cheap few hours or an immensely expensive expedition. In either case, this twice-a-year event is fun for all – or, at least, for me – and is to a worthwhile trip for anyone who may have already ate and drank too much in Paris during previous trips and is looking for a new location for such indulgences. The antique shopping, frankly, is pretty fun, too.