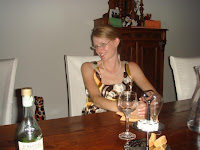 hen my friend, The Gourmet Goddess, and I get together we tend to talk until the proverbial cows come home – and as she and I both grew up amongst rural surroundings this isn’t as figurative of a comment as you might think it is! With The Gourmet Goddess, getting together for lunch, a cup of coffee, or more likely a bottle of champagne finds us covering every topic under the sun – with long, lengthy tributes to travel, shopping, meals out and complex recipe exchanges. Needless to say, The Goddess happens to be one of my favorite people in the world as she is one of the few people I know who has the stamina to discuss these issues in the intensity and depth I desire. The Goddess also happens to be one of those perfectly poised people who would make me green with envy if it weren’t for the fact that she’s so loveable and down to earth. That said, whenever I’m seeking some style advice (or life-style advice in general) she’s one of the first friends I turn to, as she is certain to tell me the most appropriate thing to wear, to do, or the best way to respond to any situation. It’s sort of like having Emily Post and Martha Stewart () combined in one well-rounded friend – only The Gourmet Goddess is much funnier and I suspect better dressed than either Emily or Martha, and certainly more attractive. She is a “goddess” after all.

So when my husband, The Wine Guy, and I received our invites to The Gala at the Louvre I immediately asked The Goddess her opinion on everything. I began by telling her what I was planning to wear and, believe it or not, the conversation actually died much quicker than you’d expect. I had already found a perfectly appropriate gown and after we “oohed and ahhed” over the dress details there wasn’t much else to add to the conversation. But when she asked me what my husband WG, otherwise known as Penguin Boy, was going to wear, the conversation took off. We’d found WG a tuxedo on sale for such a phenomenal price that when we calculated the cost of renting one times the three occasions we’re anticipating to need to rent one this year it was actually cheaper to buy “Le Smoking” suit rather than to rent it. And it really sounds so James Bond to own your tuxedo, and as it turned out, we’ve discovered that somehow WG was the only one of our guy friends who didn’t already own his own “Smoking”. Ideally, if WG were going to buy a tux, he’d rather have had it custom-made by the Parisian tailor who normally makes his suits, but given the limited number of times he’d be wearing the tux we couldn’t quite justify that expense. One haute couture costume per gala was enough… adding a custom-tailored tuxedo to top it off might have broken the bankbook. And trust me after buying my most recent bevy of gala gown accessories, I’m thinking that we might start eating a lot of frugal-friendly beans to counterbalance the spending spree.

When The Antiques Diva ™ was a child growing up in a small town in Oklahoma where the only men in town who wore suits were the bankers and used car salesmen, I used to browse the Sears catalog imagining that one of those smartly dressed men wearing a tie and button down shirt was my future husband. Little did I realize at the time that a suit from Sears was a little too “Death of a Salesman” and that the man I eventually married would rather walk naked through the halls of his office throwing candy and coronating the Admin Assistants with flower lei’s before he’d wear a suit purchased at Sears. Nevertheless the point remains – misguided childhood fashion sense or not – I remember telling my mother that when I grew up I wanted to marry a man who wore a suit to work each day. Interestingly, my sister told our mother on that same day that she wanted to marry a dark-eyed artist and in fact we both fulfilled our childhood fantasies. Anyway, here lately WG has been trying on his tuxedo and strutting around the house showing off his GQ look and he has considered implementing a new “dress for dinner” policy in our home. As WG is a CFO, he has figured that each time he wears the tux he is decreasing the average cost per wear, thus making the tuxedo an even better bargain than we thought originally. With WG, it’s always about the numbers. 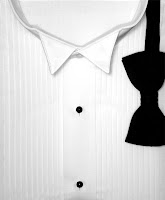 And that’s a good thing because he’s decided that if he isn’t buying a custom-tailored tuxedo, than at the very least he should buy a custom-tailored tuxedo shirt to go with it and to class it up a bit, which brings me back full circle to The Gourmet Goddess. You might think that I ramble at times, but these ramblings always have a reason. As I explained to The Goddess that we’d purchased a tuxedo but were still in need of buying the full range of accessories that go along with it, she immediately offered to let WG borrow one of her husband’s tuxedo shirts, along with his cumberbund, shirt buttons, matching cuff links and tie. This was to be our back-up plan, she advised with a knowing nod, “One must always have a back-up plan”. She dug into her purse, pulled out her little black book, and began looking for tuxedo shirt shopping addresses.
“WG needs to take a business trip to London.” She sighed, as she always did when she said the city’s name. Though German, The Goddess had lived in London for quite some time and had picked up the most perfect British accent I’d ever heard on anyone not related to The Queen.

“There he should visit any one of the following shops,” she continued, as she pulled out a pen and began writing in her perfect, precise penmanship one address after another. I immediately began scanning my PDA to see if WG was scheduled to be in the UK before the gala but sadly he didn’t have a trip planned. Krakow, Vienna, Berlin, yes, but not London. I text-messaged him from my mobile, “Find a business reason 2 go 2 London B4 the gala. I’ve got some serious shopping 4 U 2 do.”

His response, typical WG, was “Yikes! That sounds expensive!” Did I mention that with WG it’s always about the numbers? This doesn’t make him the easiest man for a fun-loving diva to be married to. ”It’s 4 U.” I responded in text.

And that’s all he needed to get him booking a trip to England with The Goddess’ secret addresses folded up tightly in his shirt pocket. As always, I want to share my secrets with you so that next time you’re in London, you too can have a few custom-tailored shirts made or pick up some sensational “off the rack” shirts as well.

The first place on The Goddess’ list was “Thomas Pink – London’s Leading shirt maker, where the “” is so divine that you nearly forget altogether about going custom made. Then came TM Lewin, on the New Bond Street, which is just a hop, skip and a jump away from one of my fav window shopping streets in the world – “Bond Street”. Of course, 3rd on her list was

the shop that WG is most likely to hit, Austin Reed, whose name is practically synonymous with classic English style and whose bespoke shirts simply scream class, if class is a word that can be screamed.

Finally, perhaps as a concession to the fact that WG’s business schedule might not allow him to make it to London before the gala (you know what they say about good intentions and best laid plans…), The Goddess included in her list the well-respected Charles Tyrwhitt, the largest mail order shirt company in the United Kingdom and she noted that “they also happen to have a store at La Vallee Outlet Mall just outside Paris”. Knowing us as she does, she knows that Paris is as much a part of our blood as is oxygen, so she knew that if all else failed we could swing out to La Vallee next time we were in “the city of light.” Whatever the case, whether purchased in London, Paris, or on our own sofa while surfing the net, The Gourmet Goddess 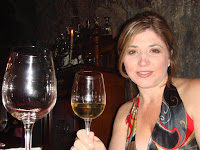 made some super shirt shopping recommendations – and Ladies, these shops don’t sell only for the gents….