top: 5px; float: left; color: white; background: #781300; border: 1px solid darkkhaki; font-size: 50px; line-height: 40px; padding-top: 1px; padding-right: 5px; font-family: times;”>T oday we’re continuing our Favorite Finds from The Antique & Design Center of High Point.  If you missed part one make sure to go back and read it HERE. Now, last time I wrote, you’ll recall, I was delighted to lead a tour of the Antique & Design Center during Spring Market. For those of you who missed market, I had to share some of my top picks from market.

Normally specializing in painted pieces of Italian, Swedish and French provenance, Mitra of Art & Antique Hunter found a sublime Swedish walnut table that she instantly knew was a show stopper. This piece is stunning in person – photos simply cannot do it justice. The pattern of the wood grain is gorgeous in an of itself, each piece specifically cut to make a starburst on the table’s center, with the woodgrain gorgeously flowing down the legs. 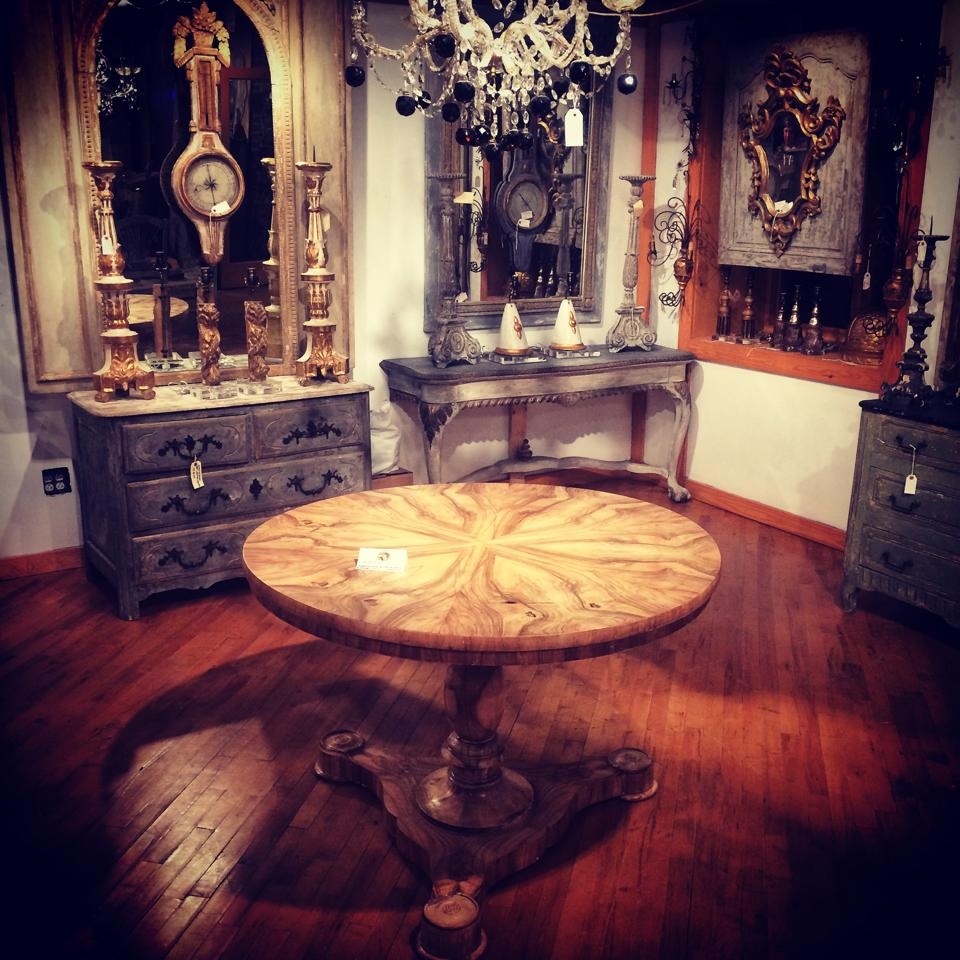 There weren’t a lot of garden antiques at the Antique & Design Center of High Point, but the pieces that were there were stellar. Perhaps my favorite garden piece at the fair was this pair of rare 1920’s sculpted garden statues from Gallery at Summerhill. Australian vendor Chris O’Brian found this pair in a Palm Beach House – constructed entirely from one piece of carved limestone. The quality is exquisite. I loved their pose- the way their forms embraced – it’s actually quite rare to find both male and female pieces together this way. And if you look closely, the male figures have classic Baroque putti faces… but the females… have you ever seen anything quite like them? Probably not! There is no tradition for a female “putti” face so the sculptor had to imagine them himself, breathing his own life and inspiration into them. 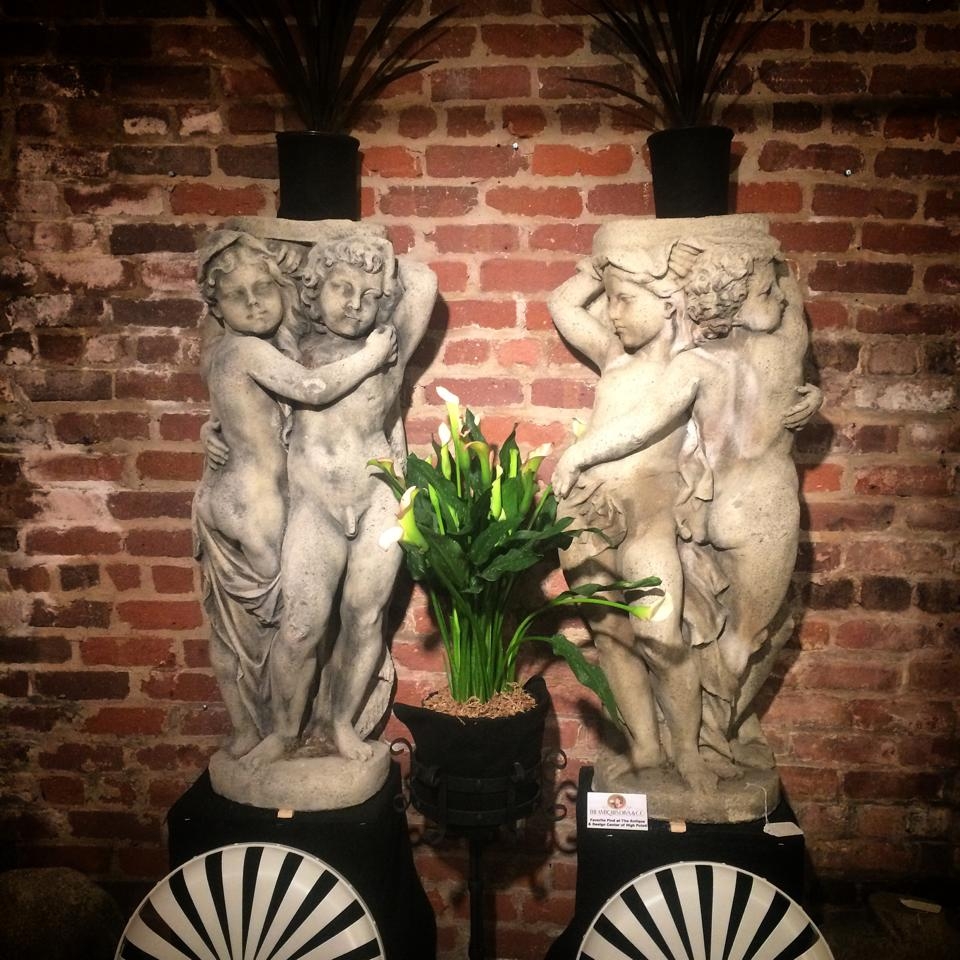 Another fabulous garden piece, this pair of Romantic Revival Movement garden statues circa 1800 from Hank Kozlowski are grand and fun all at once. They’d be just as appropriate today in a boxwood garden as they would be in Marie Antoinette’s hamlet where she used to frolic pretending to be a peasant! 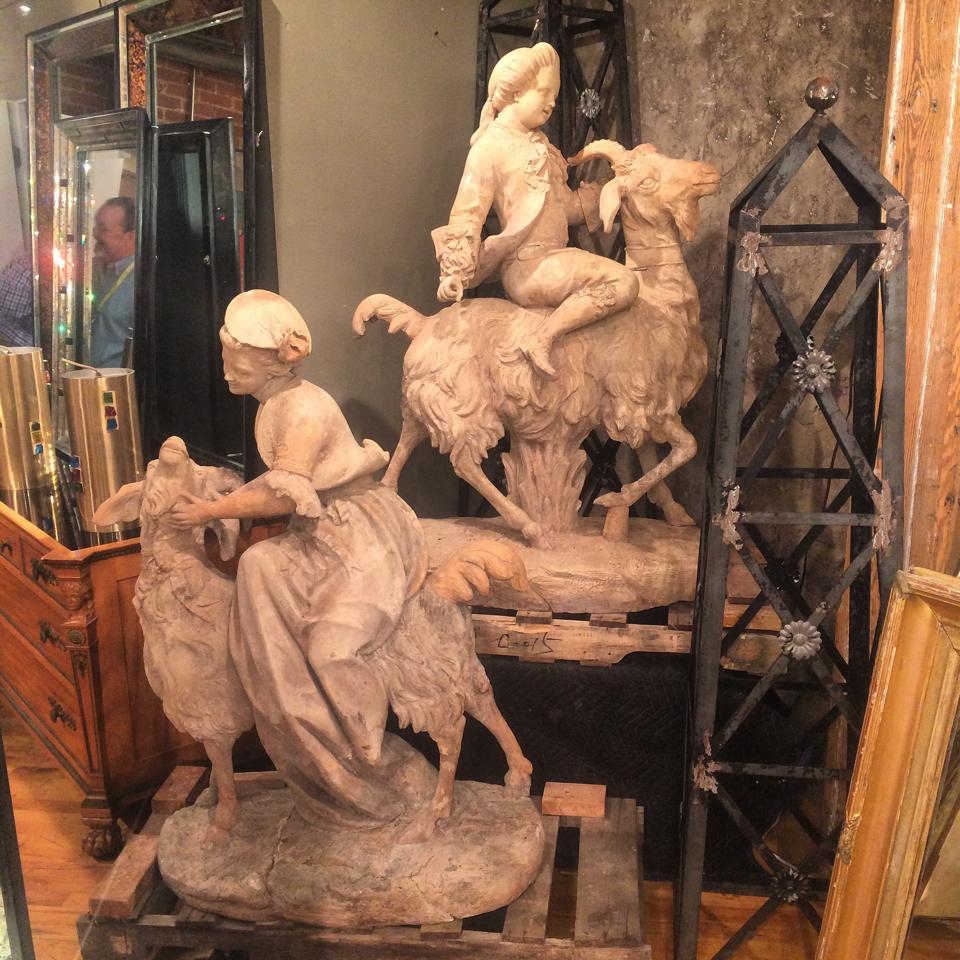 Next door to Hank Kozlowski is Halsey Dean Antiques which gives vintage and antique pieces a new lease on life. They silver and gold leaf vintage pieces so they simply shimmer. One of our favorite finds in their stall was a reinvented Tomlinson piece made in 1962… RIGHT HERE IN THE VERY BUILDING where the Antique & Design Center of High Point now calls home! At The Antiques Diva & Co we believe in making antiques & vintage pieces relevant. I give Chris and Tim a round of applause for making vintage pieces that might be overlooked more marketable and applicable for today’s interior. 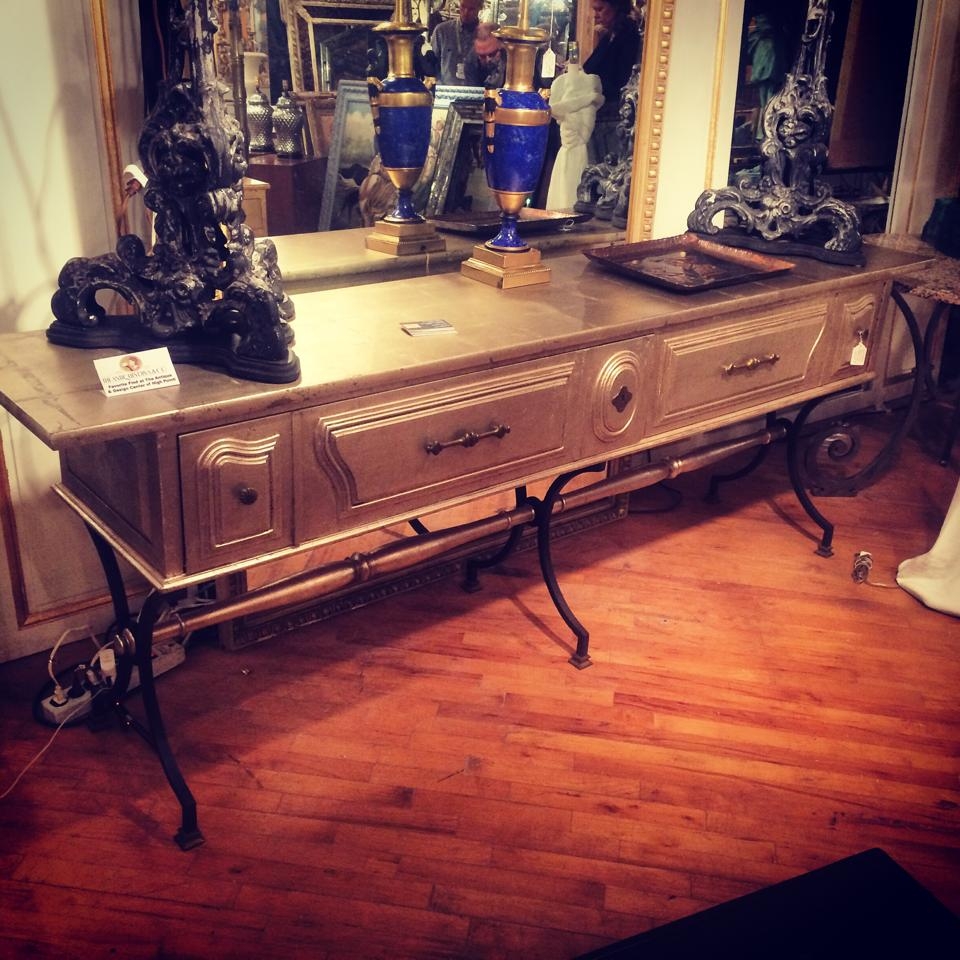 I love it when vendors think outside the box. And that’s exactly what vendor Heidi Jones of Punch Jones does. By nature she is a storyteller and her inventory is choreographed in a way that it reads as if  it were a novel. Sometimes it’s a historical novel, other times a mystery. While almost all of her pieces were statement pieces, perhaps the piece that caught my eye the most was an antique black dress framed in a shadow box. With such graphic punch it could work in a modern space as well as a traditional space! 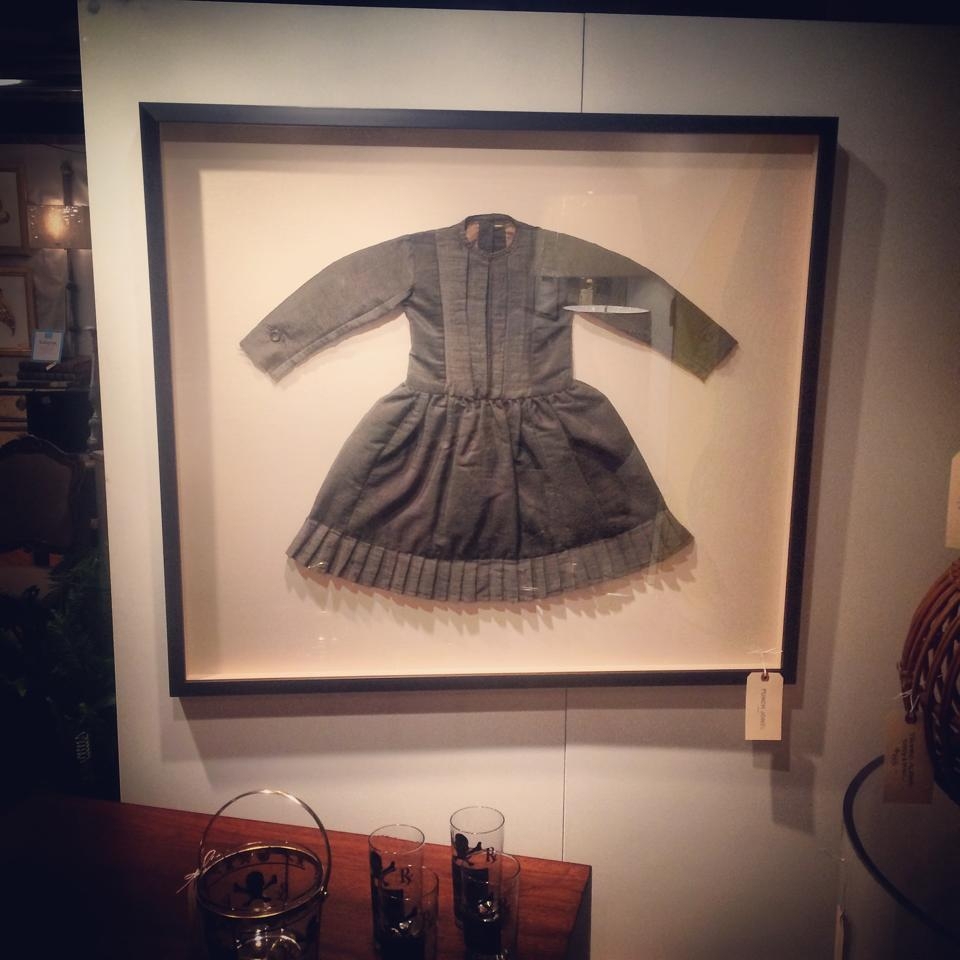 Speaking of vendors with great eyes, Sandy Luther has a fantastic eye. Her entire booth is a favorite from market because of her divine style – we couldn’t choose just one piece to highlight – so we’re highlighting Sandy’s style overall. Correction make that “Sandy’s Style” overall… the word style needed a capital S! Specializing in 18th C Italian religious relics and fragments, Sandy does like to shake it up from time to time. She’s recently started mixing in mid century pieces with her inventory and she has me smitten with a capital S. 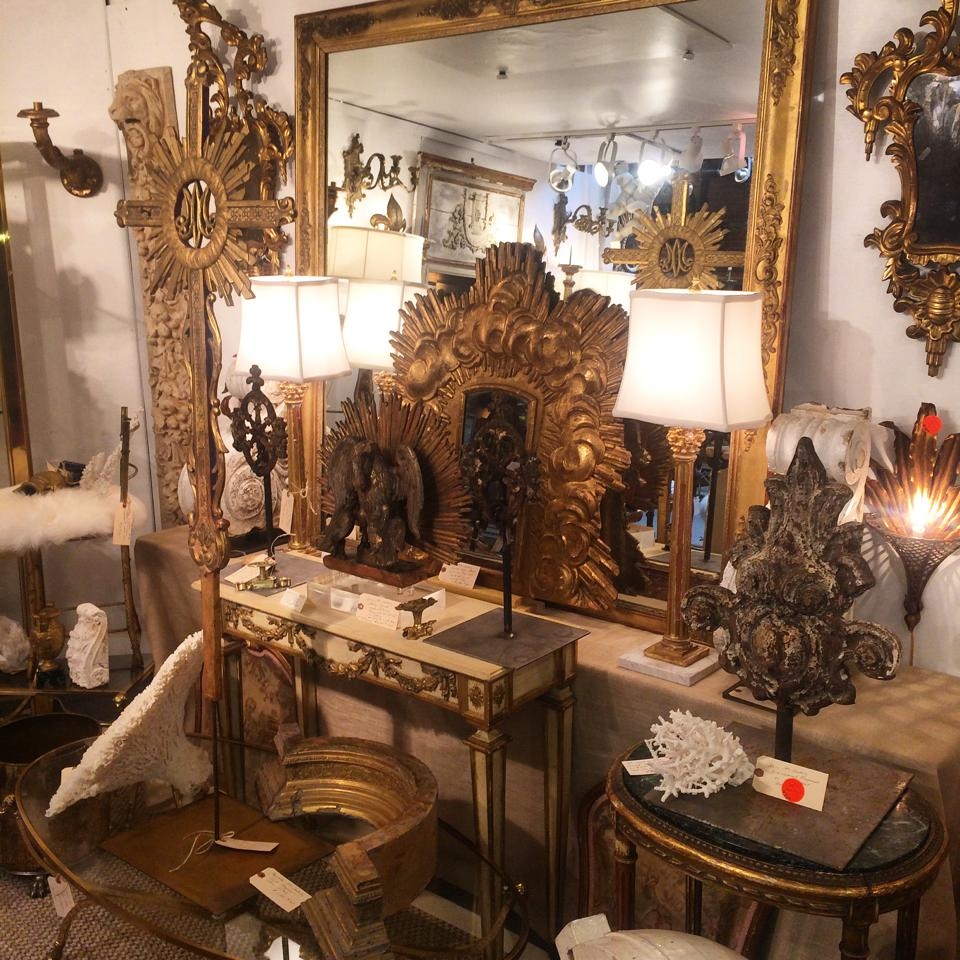 Speaking of being Smitten, you’ve probably heard me say before that Alhambra Antiques is one of my favorite vendors in the USA, selling divine European inventory. Ignacio (and his daughter Olga who is co-owner with husband Doug Scott of The HighBoy) have a great eye for sourcing in Europe! Alhambra Antiques consistently has top quality, creative inventory that punctuates spaces with a European vibe. His first time displaying at market, vendor Ignacio’s stole the show with his chandeliers. While he had chandeliers dating several hundred years old, perhaps my favorites were the vintage Italian Murano and Art Glass. Talk about a statement piece! WOW! 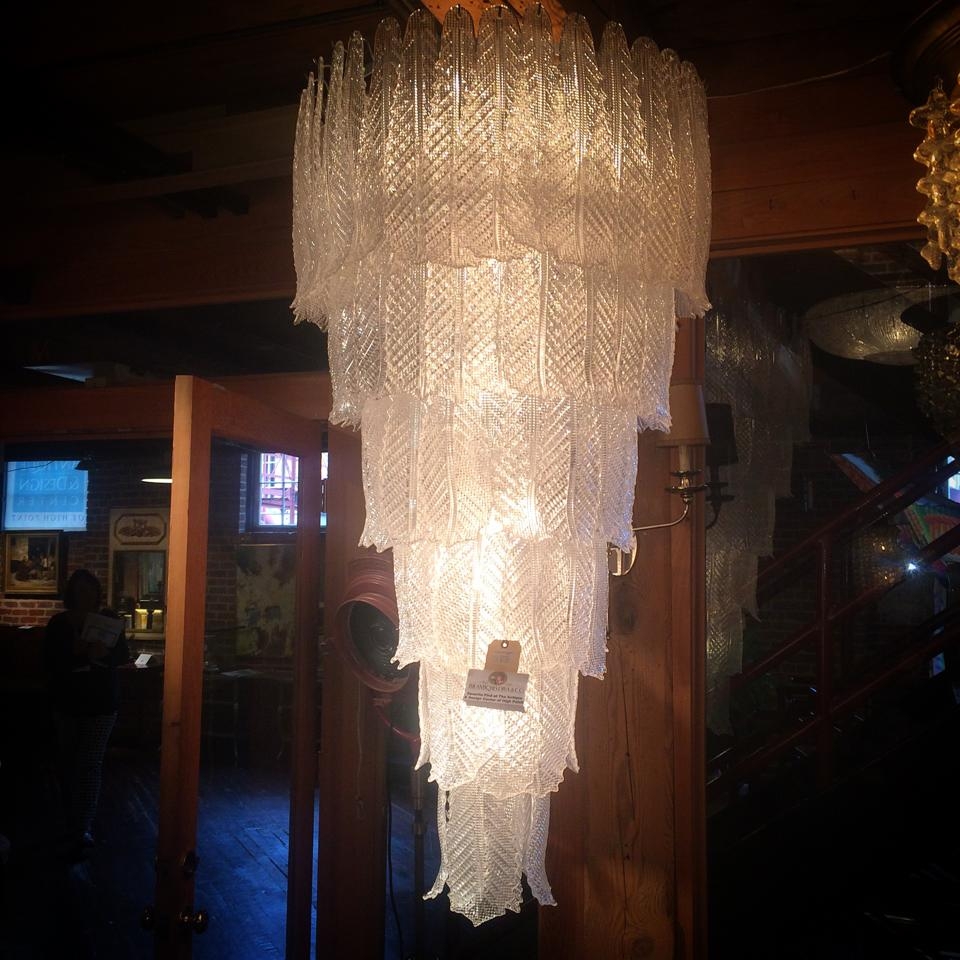 Sometimes my favorite items in the booth, weren’t the oldest or the most precious, or even the best value. Dealers Richard and Tatiana of Rue Auber Antiques had a wonderful assortment of pieces that were under-priced! They buy low at auction (or house clearing sales nearby their New England home) and thus they pass along their savings. One painting in their booth was estimated at $3-5K at auction and they were selling for $1200 and they had an Italian Carerra Marble fireplace that would have sold in New York for 12K going for 4K! They pride themselves on seeking quality and selling for a good value. The piece that struck me in their booth was a designer’s dream – it was a faux malachite table from the 1960s. The color, the pattern, the shape were all perfect and I can imagine it showing up on the cover of House Beautiful or some other shelter publication in the coming years! 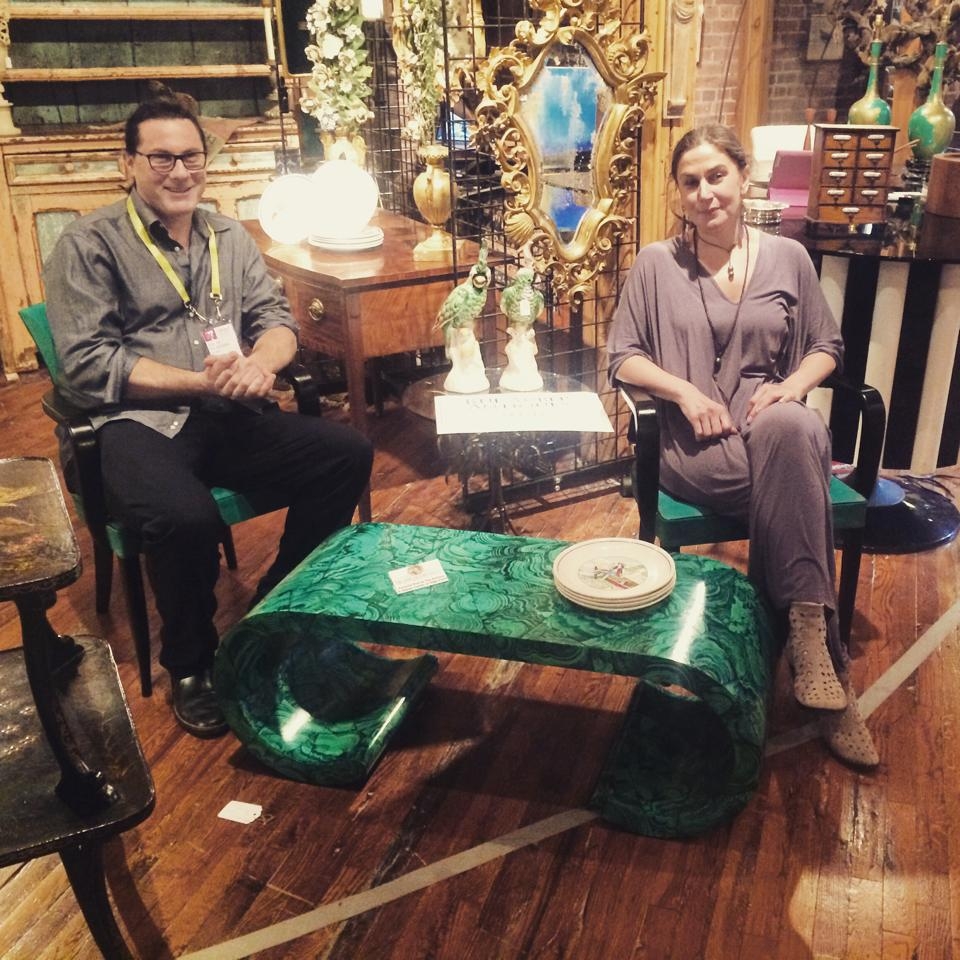 Last but not least was Marshall Clements from Little Rock, Arkansas. They have some of the most to-die-for inventory – my particular favorite piece in their booth was a 19th C Sculoa Baroque Table – similar to Pietre Dura (which is comprised of semi-precious stones). This is a pigment version from a church in Rome. I think it was one of the most special pieces at the fair! I also loved their Pair of 19th C bibliotheques as well as their assortment of well priced 18th C walnut tables selling for 3-5K. 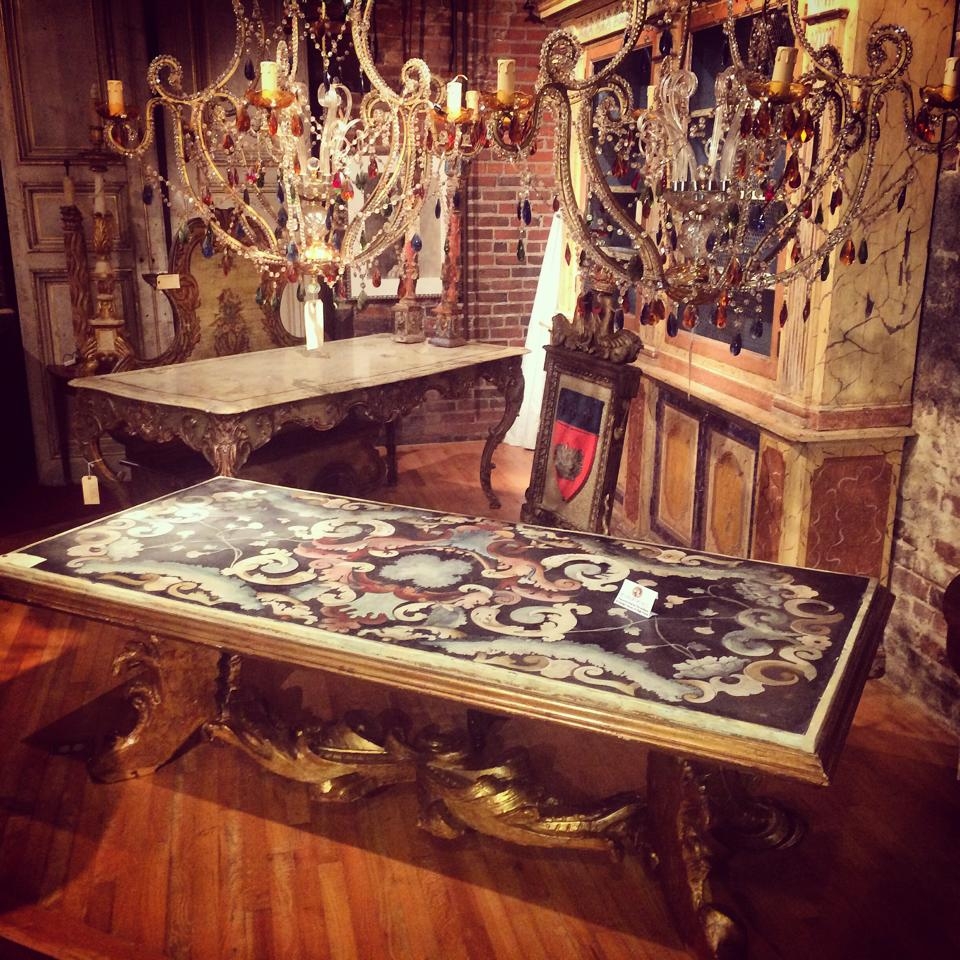 top: 5px; float: left; color: white; background: #781300; border: 1px solid darkkhaki; font-size: 60px; line-height: 50px; padding-top: 1px; padding-right: 5px; font-family: times;”>Apparently the latest trend in “selfies” is “shelfies” – photos of artistically arranged shelves being posted on social media sites. I’ve been taking “shelfies” for years but never knew they had a name. My library shelves are a combination of literary wizard and mad scientist as I mix and match pieces and periods, adding some eclecticism to my décor. In general my style is modern meets antiques – I shake it up a bit with my shelf décor.

On this shelf vintage books and the Bible mix with a reproduction bronze statue picked up at High Point Antiques & Design Center with some vintage chemistry sets picked up on one of our tours/belgium” target=”_blank”>Belgium Antique Buying Tours at the Tongeren flea market. Tucked under one beaker? The skin from a cobra I held on vacation last year in Thailand.

top: 5px; float: left; color: white; background: #781300; border: 1px solid darkkhaki; font-size: 60px; line-height: 50px; padding-top: 1px; padding-right: 5px; font-family: times;”>People “in the know” are talking about the Kitchen Design Network and their new informative workshops for designers and decorators, beginning with the High Point Market inaugural full day workshop coming up on Friday, April 4th at the O’Henry Hotel in High Point, North Carolina.  And guess what?  The Antiques Diva has 2 free tickets to give away to a lucky reader! 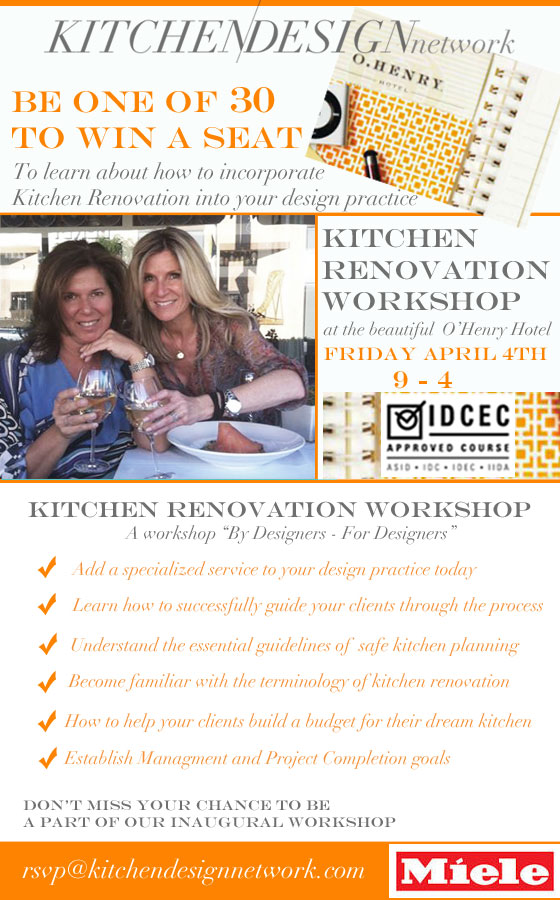 The workshop is set to be completely niche to the kitchen business.  Everyone wants a new kitchen and recent surveys show that it’s the most sought after remodeling project in home design today. The workshop is totally knowledge and experienced based and will deliver tangible skills designers can apply to their businesses and begin to broaden their services immediately.  It will be a “hands on” experiential day of learning for designers and decorators looking to learn from “real life, in the daily design trenches.”

The workshop is sponsored by the Miele Showroom and seating is limited to just 30 people.  SO…how do you enter to win 2 tickets from The Antiques Diva & Co?  To enter, simply “share” this blog post on your social media page and tell us why you want to attend this workshop!  Don’t forget to tag “The Antiques Diva & Co” on Facebook or on Twitter to be sure we see your answers!  The winner will be notified via social media and will be able to enjoy this fun and informative workshop all about the heart of the home, the kitchen!

Looking forward to hearing your answers!

My poor husband has the patience of a saint (and happens to be meeting me in Milan to whisk me away for a week in Tuscany after this grueling schedule)!  So to show him my appreciation for his patience with my crazy travel schedule, I spent an afternoon in the kitchen and put together a meal he’ll remember while I’m away – our goose is cooked!: 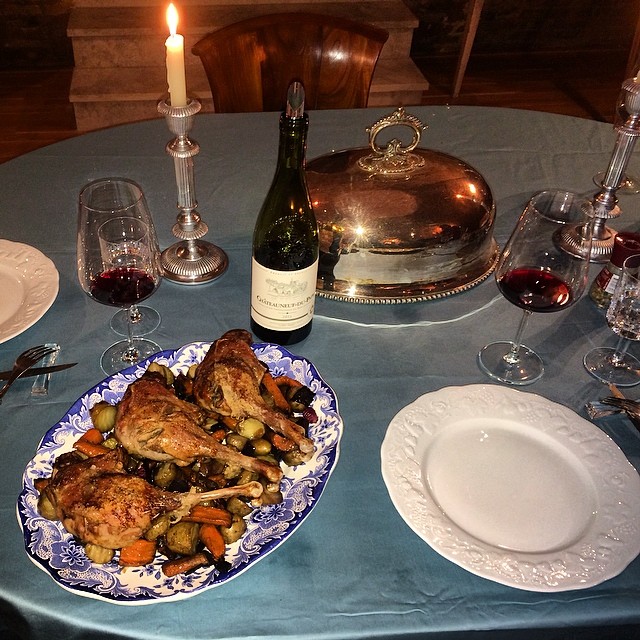 Served with a selection of champagne and wines, including a gorgeous Chateauneuf du Pape, bien sur!

I hope to see you soon at one of my US stops or on an Antiques Diva® Buying Tour.  Remember our Spring Fling with DEEP DISCOUNTS off our Paris Flea Market Tours is on through April 1, 2014.  Book your tour now to save $$$ of any Paris Flea Market booking in 2014.

Bon appetit, et Bon Weekend!
The Antiques Diva®, seen below with my beloved during our summer vacation last year in NOLA 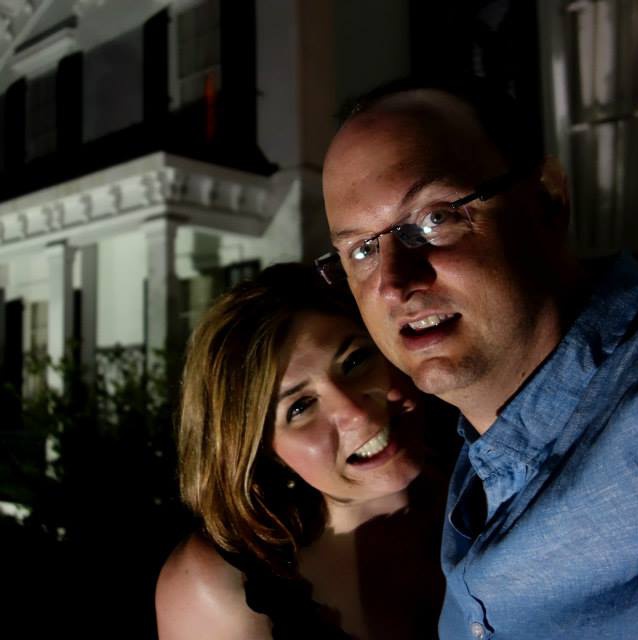