I love visiting house museums as it gives a glimpse into how people lived in the past, bringing to life all the gorgeous antiques I see in markets, warehouses and antique shops. 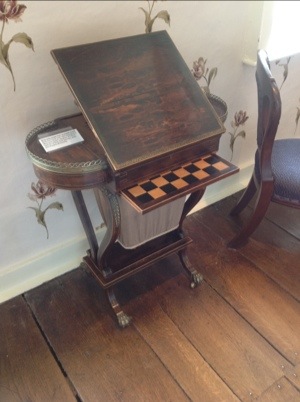 In the Jane Austen House Museum in Chawton, England I found a multi-use piece that intrigued me. This multi functional work table made from Jacaranda wood was owned by the Austen family and was used for writing, chess, backgammon, draughts and sewing. Perhaps Jane herself used the piece when she and her mother and sister worked upon this patchwork coverlet or quilt. 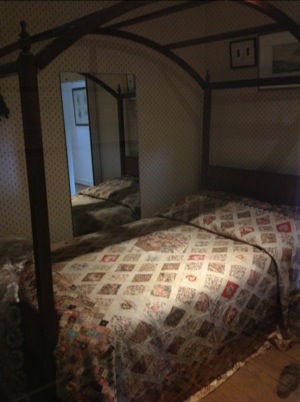 Jane created this coverlet around 1810 using scraps of dresses and soft furnishings traded with friends and family. The museum has in its possession a letter Jane wrote to her sister Cassandra who was visiting their brother asking if she had been able to gather additional fabrics while in the city as the making of the quilt was at a standstill until they had more fabrics. The fabrics used in the quilt seem traditional to our eye today but were actually quite modern during the Jane’s time. We can tell this because many of the patches in the antique quilt contain both the colors red and blue. The process for fixing different colors in the same fabric wasn’t discovered until 1808 – before then if blue and red were both used in the same fabric the fabrics became purple. It’s an easy trick for dating fabrics!

Each diamond shaped patch in the quilt is joined to the next with 4 separate strips of black and white polka dot fabric individually sewn together. All in all it’s a beautiful antique English patchwork quilt – how amazing to think it was made by one of the greatest writers of all time! 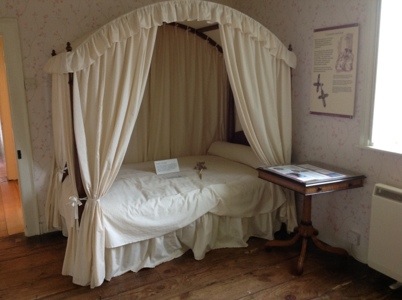 top: 5px; float: left; color: white; background: #781300; border: 1px solid darkkhaki; font-size: 80px; line-height: 70px; padding-top: 1px; padding-right: 5px; font-family: times;”>This past weekend while on our summer vacation to Great Britain and Ireland my husband, niece and I visited the Jane Austen House Museum in Chawton, England. This house is where Miss Austen spent the last 8 years of her life, finishing Sense and Sensibility, Pride and Prejudice, Emma and many more classics. She died at age 41 after revolutionizing the English novel and making a literary contribution that would leave generations forevermore thankful to her creative spirit and imagination. 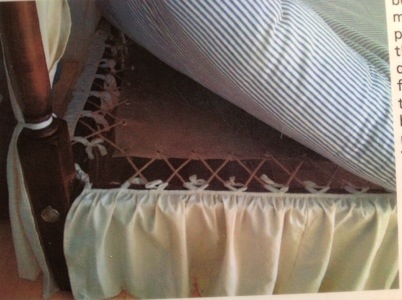 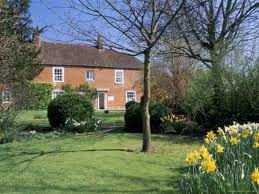 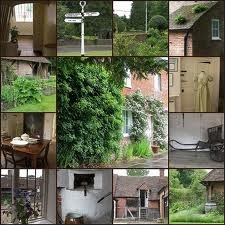 At the Jane Austen House Museum we were able to see the small table where she wrote and my niece was able to play piano in Jane’s drawing room where Jane played 2 hours a day, but my favorite room was Jane’s bedroom she shared with her sister Cassandra. The museum didn’t have the actual bed where Jane slept but they did have a period-perfect replacement. Underneath the swaths of fabric decorating the plain headboard and simple round topped canopy, the mattress lays upon a base that looks somewhat like a trampoline. Jute rope is threaded through grooves to pull the bed tight, keeping the mattress from sagging and the bed firm. It was from here the expression “sleep tight” originated in the 16th and 17th C when mattresses rested on ropes that needed tightened frequently to ensure a good nights sleep. 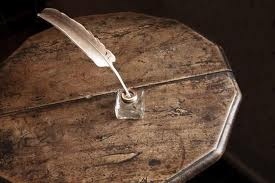 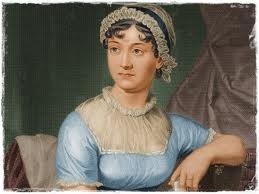