top:2px;padding-right:5px;font-family:times;”>Last week, La Reine and her husband were shopping on Worth Avenue in Palm Beach when The Big Guy wandered into some boring boy’s boutique, leaving La Reine to her own devices. When he found her, mere minutes later, she was deep in discussion with a sales clerk at Hermès who was profusely apologizing that she couldn’t pack her purchase in the standard Hermès bag. 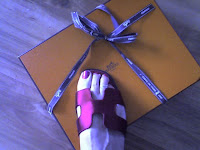 Store policy was that all sale items had to go home in a plain white sack. Not that La Reine cared… she was downright giddy that she had stumbled onto a mysteriously-legendary-Holy-Grail-alluding-type-of-designer-goods-sale that typically evades the average shopper. La Reine had found a pair of Hermès sandals (in the most perfect shade of neutral red) reduced from $485 to $190 – a discount that even my number-crunching, CFO husband (who is aghast at the idea of spending $200 on a pair of women’s sandals) can respect.

La Reine, wisely, didn’t show all her cards to the clerk. She contained her excitement until once outside the store and demurely accepted the clerks apologies with a disappointed nod of acknowledgement before happily accepting a peace offering of an extra Hermès ribbon tied around the signature orange shoebox.

I needed an Hermès education!

Listening to La Reine recount the tale of her conquest, I must admit I realized that my personal Hermès prowess was sadly lacking as I own only a few Hermès scarves – all of which were gifts from a dear friend. I realized that had I been in Palm Beach instead of La Reine, I might have missed out on this sale since my “luxury goods antennae” isn’t as finely tuned as hers.

I decided I was failing as a Diva. I had to rectify this at once. I needed an Hermès education!

Enter 2 Parisian pals. Jennifer B. is an all-around Hermès guru and has been wearing Hermès since she was a Boston teenager. She has that “classy New England look” perfected. After moving to France, she took Paris by storm, teaching expat wives and fellow American’s her Hermès scarf tying tricks and sharing shopping secrets in private workshops for the WOAC and AWG. Somewhere along her diva-dom days, she met and befriended Rebecca Magniant, the gorgeous founder of Chic Shopping Paris, and eventually went to work part time for Rebecca as one of her tour guides. 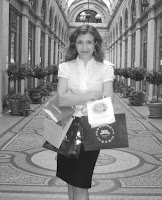 Rebecca is simply one of the most stylish people I’ve met in real life. We were once on the same flight from Paris to Atlanta and while the rest of the passengers climbed from the cabin through customs with bleary eyes and matted-down hair, Rebecca appeared perfectly pressed, fresh and energized looking like she just stepped out of an ad in Vogue. I don’t know how she does it, but I devour her hip shopping blog in hopes of learning at her knees how to be a true “Style Diva”. And while the blog is great, I am anxiously awaiting the release of her new book Chic Shopping Paris, an absolutely quintessential shopping guide to the 21 arrondisments, packed full of les plus bonnes adresses de Paris!

Rebecca and Jennifer have been friends for years and have let me scurry around in the dazzling peripherique of their lives. So when I realized I needed help, I went straight to the source – I present to you:

It’s kind of funny… since having a baby, my motto has changed from an attitude of “It’s not a good day without wearing an Hermès scarf” when I first moved to Paris five years ago to my present day, post-baby daily routine involving a spray of my favorite Hermès perfume and using the homemade Hermès burp cloth that a friend gave me to clean up after my daughter. By the way, shoppers, save that Hermès ribbon and use it to accessorize anything from a baby’s burp-cloth to a tres chic pelmet board!! And remember that your shopping bags can even be sold on Ebay, earning you money to buy more Hermès!

I have to ask myself, “Is any purse worth $10,000 or more?” Maybe if it is made-to-order and by hand in France. I don’t want to name names, but I can think of one famous French luxe brand that is mass produced and not even true leather…. Hmm, think I will hold out for that vintage to-buy-an-AUTHENTIC-Hermes-Birkin-or-Kelly-Bag
_W0QQugidZ10000000000110367″ target=”_blank”>brown crocodile Kelly bag, named after Grace Kelly. 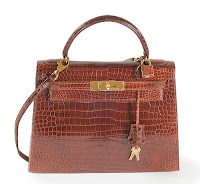 Believe it or not, but on one of my tours.htm” target=”_blank”>CHIC SHOPPING PARIS TOURS, I had someone buy a Kelly Bag at “the puce” for 5K – a bargain! Like La Reine found out, luxury goods bargains are out there. Last time I was in Vintage Expert Didier Ludot’s Palais Royale shop, he confided “tonpost.com/wp-dyn/content/article/2006/06/28/AR2006062801276.html” target=”_blank”>Kelly Bags are everywhere. Birkin’s are much harder to find.” You must check out his store — he does have some premium pieces.

Plus some US stores have special sales; you just have to ask when and if.

My favorite Hermès gift for the women on my shopping list is the luscious dark lipstick (matt or gloss), packaged in classic Hermès fashion. Selling for around 25€, it packs a lot of bang for the buck with great packaging.

Great gift idea, Jennifer – The Lipstick is Red and only available in Hermes stores.

tore.jpg”>tore.jpg” border=”0″ />Before having kids I used to spend hours in the Paris flagship store at tores/servlet/StoreMapView?storeId=10201&catalogId=10051&langId=-2&shopId=170″ target=”_blank”>24, rue Faubourg St Honoré. Paris’ Hermès does have bi-annual sales to coincide with the official Parisian “toral.html?NodeID=1&EditoID=18249″ target=”_blank”>soldes” periods one in the winter and another in the summer. Sale dates are set by the French government and are announced a few weeks before the sales start. Check the French newspapers or call the store to find out the date and location. The Secret Hermès Sale is always held off-site.

I was lucky enough to be given a map, complete with highlighted trail, by the doorman for my first sale. Be prepared to wait in line and declare on a little card anything Hermès you happen to be wearing or carrying, lest they think you shoplifted on your way out! Prices can be half to one third off regular Paris prices. My favorite part is the large scarf pit. Think hundreds of French women (and a few lucky tourists) grabbing scarves for review and throwing them back for another pick. Stockists throw out new merchandise as fast as you can grab them. Ties and enamel bracelets are another favorite and there is usually a decent selection at the sale. Purses, belts and shoes can be hit or miss, depending on size and taste.

At the flagship store, there is a cool, private museum. Have Chic Shopping Paris arrange a private tour!

Absolutely, this is a great idea. But remember, the museum is by appointment only.

Not only do you learn the history of Hermes at the museum, but you also see some of their former designs and if you fall in love with something, have patience!! Many popular designs that have been retired do come back into production! Even if you can’t find your favorite scarf or bracelet at the moment, it might reappear. 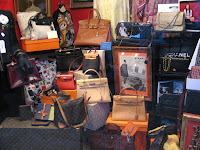 Rumor has it that if an Hermès product doesn’t sell, they destroy their own stock rather than sell it to you in a discount or outlet store! Great bargains and/or retired designs can be found at vintage (i.e. gently used) merchants at many of Paris’ famous depot ventes. Most Depot Vente’s specialize in high-end designer clothes and leather goods. You will mos
t often find scarves, ties and the occasional purse if you are lucky enough. Reciproque is the most famous, but their prices tend to be a bit higher.

The famous Parisian auction house Hôtel Drouot often has scarves to auction, so watch their sale calendar. But be prepared to bid in French. Our friend Bella Francesca, who is fluent, once bid against herself in the auction frenzy! 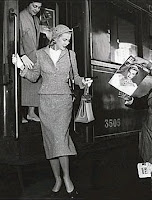 There is always Ebay, but buyer beware…fakes are out there. If the price seems too good to be true, it usually is.

Check out the Hermès chat room group on www.yahoo.com for insider tips to spot fakes. There is a yahoo e-group for die-hard fans.

My favorite shop at “the Puce” for scarves and ties is Le Monde de Voyage – they also sell bags, bracelets, etc and their scarves run for only 140-150 Euros. It’s a good deal for vintage Hermès. 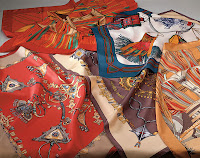 Of course, if you buy them new (or receive them as a gift), Hermès items such as scarves and ties can be exchanged at any store if in the original box. If your local store does not have the scarf you lust after, come to Paris and exchange it with no hassles! This is not usually a French policy… but Hermès is progressive!

Feel free to ask for the latest scarf book at the scarf counter while you are in the store, and if you purchase something they might even throw in a scarf-tying book. It never hurts to ask! But dress for success and you will be treated nicer. It also does not hurt to speak a few words of polite, basic French such as Bonjour Madame, Merci, etc.

The Hermès website gets better and better all the time for those not near an actual store.

Remember the Hermès chat group – these are serious fans who live all over the world. They discuss vintage & new scarves, how to wear them and how to spot fakes – a perfect tool in your Hermès education, regardless of where you live! And www.ivillage.com has an excellent “ series of scarf tying tips”! Lastly, if you’re looking for Hermès, you might just want an expert to hold your hand. Next time you’re in Paris, remember Chic Shopping Paris!!

An Hermes scarf is one of those quintessential French items that never go out of style. If you think you might age yourself by wearing the scarf around your neck, try one of the more modern ways of wearing a scarf – tied around the strap of your purse, or wrapped around your wrist like a bracelet. You can even wear the larger ones as a sexy summer halter top – for the bold only!