Skip to content
to 10px; WIDTH: 312px; CURSOR: hand; HEIGHT: 400px; TEXT-ALIGN: center” alt=”” src=”http://4.bp.blogspot.com/_kcTb8DnPVW4/Sk9YHF9mMkI/AAAAAAAADQ8/PN_OhFWagxo/s400/Laura_Ashley27.JPG” border=”0″ />top:2px;padding-right:5px;font-family:times;”>Call them notions, haberdashery, passementerie or passamaneria – whatever the language, whether British English, American, French or Italian, I love tassels, trims, tiebacks, cords and bows. They are small details that go almost unnoticed in homes yet make a significant difference in the decor. One doesn’t walk in a friend’s home and say “I love the trim on that chair and the tassels on those drapes!” but rather one walks into a house, commenting upon how finished and polished it is. Taking a seat, your guests will look around the room, a little bit envious, and sigh “You’ve thought of every last detail”.
to 10px; WIDTH: 259px; CURSOR: hand; HEIGHT: 400px; TEXT-ALIGN: center” alt=”” src=”http://2.bp.blogspot.com/_kcTb8DnPVW4/Sk9YGBNkfPI/AAAAAAAADQk/gN_O9Ve42k4/s400/680.1.jpg” border=”0″ />The French say that passementerie adds that certain “je ne sais quoi” – the little something more that you can’t quite put your finger on but which differentiates the blasé from the va-va-voom. You might say it’s like putting a scarf on the room – that final, finishing touch.

“Scarf?” you ask. Every time I’m getting dressed and discover that I don’t look just right – that something is missing – I reach for an Hermès to drape over my shoulders or tie around my neck and suddenly the outfit, which I thought was already complete with pearls and cardigan, comes to life. Trims, tassels and notions work like a scarf when decorating your home. And while any scarf will do – I’ve plenty of silk swaths picked up here and there, scarves that caught my eye because they are pretty – my Hermès scarves are special. They’re in a class of their own. With tassels and trims it’s the same – they are the finishing touch and if they’re Italian they’re just a little bit more special.

to 10px; WIDTH: 400px; CURSOR: hand; HEIGHT: 300px; TEXT-ALIGN: center” alt=”” src=”http://1.bp.blogspot.com/_kcTb8DnPVW4/Sk9YGVJaeUI/AAAAAAAADQs/G4GVx9I8tRs/s400/158.JPG” border=”0″ />Wherever you are in the world, you can walk into your local sewing shop and pick up something pretty and good quality, but the trims, tassels and notions in Italy have that same “je ne sais quoi” as Hermès. And just as you can buy Hermès in most major cities in the world, or online at any time, buying Hermès in Paris is special. If you shop in America, you’re buying haberdashery, but if you shop in Italy, you’re buying passamaneria – not just a household accessory, but an entire language, culture and romance.

to 10px; WIDTH: 289px; CURSOR: hand; HEIGHT: 400px; TEXT-ALIGN: center” alt=”” src=”http://1.bp.blogspot.com/_kcTb8DnPVW4/Sk9YGEIvPnI/AAAAAAAADQc/RHmf-IzqSm0/s400/fringbraidgimptypes.jpg” border=”0″ />Part of the undefineable quality that gives Italian trims an emotional edge is the memory of you standing in a little passamaneria in a hidden alleyway in Italy wearing a stylish Hermès scarf (picked up on your last trip to Paris, bien sur) while speaking a foreign language, to/s1600-h/italian_flag.gif”>to/s200/italian_flag.gif” border=”0″ />smelling the Tripe vendor who has set up his cart just around the corner from the store and the slightly salty smell of the shop keeper who had been sitting on a little slatted chair in front of his shop soaking up the afternoon sun and watching the crowds go by until you wandered in through his door. You can still taste your afternoon gelato on your tongue and as you’re about to pull out the brightly colored European cash (for surely this small of a vendor doesn’t accept credit cards) a cat rubs against your legs, distracting you. A short Italian grandma comes out of the backroom, a room with a stairway that leads to an apartment over-head. She looks like she was born making cannoli. She says something you can’t understand and you smile as she bends over quickly as if she were 17 instead of 70, plopping her “gatto” named Pinnochio on the counter next to your purchase, tassels and trims, where he purrs expecting you to admire him as his owner rubs behind his ear. His paw reaches out to play with trim still dangling from the roll setting on the counter… much as you, back home after the trip, reach out to run your fingers through the silky strands of the tassel hanging from the lock on the top drawer of the dresser you inherited from your grandmother.

to 10px; WIDTH: 400px; CURSOR: hand; HEIGHT: 300px; TEXT-ALIGN: center” alt=”” src=”http://1.bp.blogspot.com/_kcTb8DnPVW4/Sk9YG5YApQI/AAAAAAAADQ0/0URRky2wooo/s400/065.JPG” border=”0″ />A private memory that will take you on a voyage each time you sit in a chair you’ve embossed with a trim or open that drawer where you’ve hung a tassel. To everyone else, you’ve merely added an imperceptible detail that polishes your home, but you’ve bought a memory and as you sit drinking tea, chatting with a group of girlfriends you’ll run your finger over trim following the line of the chaise longue where you sit and you’ll smile, remembering a detail that no one else knows. It’s like wearing lingerie. Even if you’re wearing a conservative collar, buttoned up, prim and proper, no one but you knows you’re wearing La Perla underneath. You have a secret. 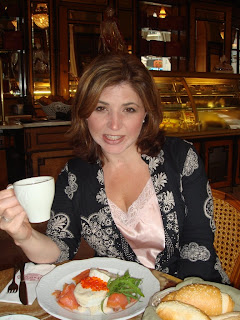 Stay Tuned Tomorrow and The Next Day for 2 Diva-scovery Addresses for your little black book!!