top:2px;padding-right:5px;font-family:times;”>It’s Queen’s Day Darling – the most important holiday of the year in The Netherlands! And at times like these I regret that I’m not back in Holland dressed head-to-toe in Orange celebrating my favorite Queen’s birthday in Amsterdam! While most countries prefer a more staid pomp and circumstance when it comes to their royal’s special days, the Dutch, in typical Dutch fashion, break the mold in coming up with bizarre party ideas to help their Queen celebrate growing another year older. Shannon McAllister of Amsterdam’s Travel Blog writes, “New Orleans has Mardi Gras. Munich serves up Oktoberfest. Pamplona parties with bulls. When it comes to the world’s best parties, Amsterdam holds its own special spot with Queen’s Day.”

to 10px; WIDTH: 320px; CURSOR: hand; HEIGHT: 282px; TEXT-ALIGN: center” alt=”” src=”http://2.bp.blogspot.com/_kcTb8DnPVW4/SfmIxpWM9SI/AAAAAAAAC74/_I_74b_ydnE/s320/Queen+Waving.jpg” border=”0″ />to 10px; WIDTH: 320px; CURSOR: hand; HEIGHT: 186px; TEXT-ALIGN: center” alt=”” src=”http://3.bp.blogspot.com/_kcTb8DnPVW4/SfmRCYTG06I/AAAAAAAAC8w/e7MzLAuNpeE/s320/Prince+Willam+and+daughter.jpg” border=”0″ />Queens Day, known as Koninginnedag in Dutch, is a national Dutch holiday celebrating the birthday of the Queen. But here’s the catch – it’s not celebrating the current Queen Beatrix’s special day but rather that of her mother, Juliana. When Queen Bea took over from Juliana in 1980, she decided that rather than having the national holiday changed to her actual birthdate of Jan 31, she’d instead bow to tradition and celebrate on her mum’s birthday as well. Perhaps she made this decision because January’s in Holland are bleak bleak bleak and known as the “dark days of winter” when the sun barely shines, the rain never stop and clouds loom ominously. Given that the Queens Day celebrations take place outdoors, a January Queens Day Celebration would have been a disaster.

to 10px; WIDTH: 240px; CURSOR: hand; HEIGHT: 320px; TEXT-ALIGN: center” alt=”” src=”http://3.bp.blogspot.com/_kcTb8DnPVW4/SfmI3e9aUEI/AAAAAAAAC8g/95yLVz1lwSI/s320/queens+day+5.jpg” border=”0″ />But “How does the Dutch Queen and her nation celebrate Beatrix’ jarig?” you ask… by throwing a country-wide yard sale of course! Well, that and drinking copious quantities of Dutch beer, and covering their tos/ig/Photos–Queen-s-Day/” target=”_blank”>body head to toe in Orange in honor of the Dutch royal house of Orange. Given that I’m a flea marketing queen, it’s the country-wide yard sale element that catches my attention. Expatica explains: “This is the one day a year that ordinary folk are allowed to set up shop on the sidewalk without a trading licence. Traditionally in the days running up to Queen’s Day, strange boxes are sectioned off on pavements around the country and marked with the word ‘Bezet’, or occupied. To the uninitiated, these markings in chalk or tape may appear to be some kind of bizarre crop circles. They are not, they are just an example of the assertiveness of the Dutch – if you want to sell items on Queen’s Day you have to mark out your territory well in advance.” Of course, as Expatica continues to say, The Dutch are “not so interested in tidying up afterwards, so that the ‘Bezet’ markings tend to linger on long after Queen’s Day and for months after that.”

to 10px; WIDTH: 320px; CURSOR: hand; HEIGHT: 240px; TEXT-ALIGN: center” alt=”” src=”http://4.bp.blogspot.com/_kcTb8DnPVW4/SfmIyA5gh9I/AAAAAAAAC8Q/VmezVjp_XNg/s320/queens+day+2.jpg” border=”0″ />
Similar to Lille’s Grand Braderie (a town wide garage sale in France held the first weekend in Sept) but sadly not as stylish, residents empty the contents of their zolders (attics) and dump both trash and treasures. Though as an antiquer I’ll be the first to say that, like the Amsterdam flea markets, this special Queens Day sale is heavy on the fleas. Used toys and forgotten VCR tapes of your favorite movies and TV shows are piled judiciously next to old running shoes, sandals with broken clasps and ties with stains. Shopping on Queens Day is sort of like shopping at the Goodwill would be if they didn’t have someone sorting through the crap in advance. That said, amidst the rubble there is almost always a jewel. I’ve bought cds of my favorite 80 bands, a myriad of faux delft to crush up and use in a mosaic project, and cut-glass serving platters galore. It’s the latter kitchen goods and entertaining table ware that are the true bargain du jour – picking up a Wedgewood plate for 1E or a 1960’s glass “Lazy Susan” for 1.50E have been my big catches.

to 10px; WIDTH: 240px; CURSOR: hand; HEIGHT: 320px; TEXT-ALIGN: center” alt=”” src=”http://2.bp.blogspot.com/_kcTb8DnPVW4/SfmIyYqx3BI/AAAAAAAAC8Y/Lfa1T9eLabk/s320/queens+day+3.jpg” border=”0″ />
Truth be told, I don’t do Queens Day for the sales. I do Queens Day for the excitement of raising my hands over my head, singing national anthems and humming along to Johnny Jordaan – for taking part in the party and dancing in the street with strangers. I do Queens Day as an excuse to drape myself head to toe in Orange (a color in my personal color wheel but am often ridiculed for wearing). And I do Queens Day to celebrate my surrogate Queen… moving to Holland for me 4 years ago was a treat – I finally had a Queen to call my own! 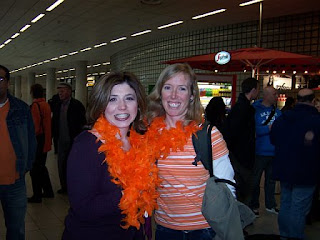 (Seen right with dear friend Cindy T – Cindy was my first friend in Paris and has known me since the day I wore denim overalls in Paris –– and she loved me anyway. Now that, dear diva readers, is a friend!)