s The Antiques Diva ™, I traverse the globe scouring flea markets, auction houses and antique districts seeking out the world’s best antiques, vintage items and home décor! It’s a rough job, but somebody has to do it. Along the way, I make some fabulously fun recommendations of other places to stop, shop, see, eat and stay (and need I mention roll out the dough?).

On all these travels, rarely have I been as pleasantly surprised as I was recently in 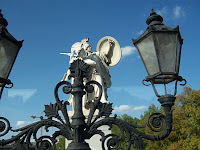 Berlin. I was shopping my way back from the Unter den Linden heading towards the Friedrichstrasse, and ultimately the Berlin Hilton where I was staying on the Gendarmenmarkt in what was East Berlin, when a boy, barely a man, standing on a street corner next to a bicycle rickshaw filled with turquoise painted mannequins dressed in turn-of-the-century attire handed me a photocopied flier with the words “Fundus Verkauf” largely displayed at the top of the page. Being as though I don’t speak German and he looked slightly weird, I dismissed this boy-man and his eccentric ensemble with barely a thought. 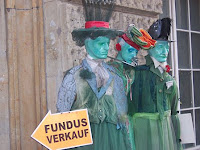 As I walked away, I glanced down and attempted to use my hodgepodge of picked-up languages to decipher the German text. Struggling with the translation, I realized that I had stumbled onto something BIG — Big as in mega proportions, fat opera singer big, Broadway big! My red Longchamp swung and hit a passerbyer as I abruptly turned 180 degrees and, though my mother raised me better than this, I couldn’t be bothered with an “excuse me in German” as my high heels clicked the stone pavement in search of the treasure. It was as if I were searching for the pot of gold at the end of the rainbow…. the buried treasure pirates are always fighting over. The… well, you get the point… I was in search of something good. Nothing gets in the way of The Antiques Diva.

In my hands I was holding a flyer for Fundus Verkauf – a large warehouse full of one-offs and once-in-a-lifetime opportunities to purchase theater props, costumes and ac 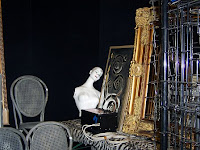 cessories from Komischen Oper Berlin (the Berlin Comedic Opera House). To supplement their inventory, Fundus Verkauf also sells the sets and props from local filmmakers as well as big-name American movie producers who’ve went on location in Berlin. I marched back a block to the large building opposite the opera draped with the giant Fundus Verkauf banner at # 14 Behrenstraat. Should I have gotten lost, the route was littered with more of the turquoise mannequins holding signs pointing the way. When I walked inside the doors of this slightly “shabby –chateau” style building I thought I’d died and gone to heaven, or at least the eclectic decorators and collectors version of it! 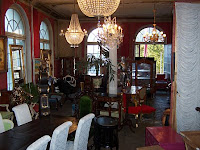 This was more fun than visiting my grandmother’s basement as a child. Gorgeous Art Deco clothing hung on a rack dangling with ballerina toe shoes standing next to a set of lovely gilted musical chairs whose seats were brightly covered in a rainbow hue of velvets. A papier-mâché cherub reclined on a Louis XV 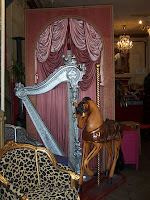 I red velvet berger, behind which a life-sized cardboard cut-out of a Prussian soldier stood protecting the loot. Chandeliers dripped like icing from the ceiling, and long, lush curtains straight out of Gone with the Wind puddled on the floor – and just like in the movies, one side of the curtains was torn down and made into a dress which was spread out over a nearby chaise longue. Baroque picture frames were piled on zebra-striped benches surrounded by faux Venetian gondolas. When I tried to determine how to define the inventory of Fundus Verkauf I decided that if you might see it in Phantom of the Opera, then you could surely find it here. 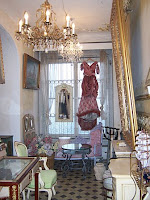 Authentic antiques, repros that could be mistaken for the real thing and bizarre kitsch and vintage items filled two floors of intensely decorated rooms. Exotic carpets and woven tapis were rolled and tucked into every corner and with a glance at the time on my mobile phone I decided to text message my husband and let him know that I was going to miss the mai tai date we’d planned back at the hotel’s Polynesian Bar. One must have priorities and owning a piece of history from the Berlin Opera house took precedence over everything else. My mai tai would have to wait. This was a once in a lifetime shopping opportunity!

Fundus Verkauf is reason enough to plan a trip to Berlin. If only so you can own the teapot that was used in this fall’s premier of Alice in Wonderland or wear the hat Don Giovanni wears in the 3rd act. Better yet, buy Romeo’s ladder and turn it into a bookshelf in your bathroom or set your dining room table with chairs used by the wind instrument section of the orchestra – I can assure you these chairs are in much better condition than those used by the tuba players!

You come to Fundus Verkauf to buy the story, so that when a guest in your home re 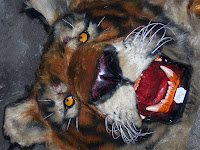 marks on the interesting taxidermy tiger head you’ve mounted above the fireplace, you have a story to tell that is slightly more interesting than “I picked it up at Pottery Barn.” Better yet, the hip thing you lug home from Berlin in your luggage
might just as easily become the next new thing that PB is making repros of and you can call yourself a trend setter.

It doesn’t matter what you find, just as long as you find something, for rest assured you are not likely to leave here empty-handed. In a lifetime spent shopping for home decorating items, I think perhaps that this shop might be my most interesting find of the year. In my mind, “Fundus Verkauf” translates to Funky Fun and Frivolous Frippery and it certainly is classified as a place I stopped, shopped and rolled out the dough. And by the way, in case you’re curious, that evening in Berlin I did make it back in time to visit the Hilton’s downstairs bar, Trader Vic’s, for that happy-hour mai tai with my husband. Hands full of bags and purchases, I made it – better late than never! 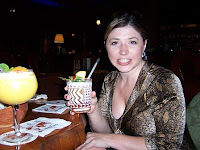 To see what movies have been filmed in Berlin and whose goods you might be able to purchase, see… http://german.about.com/library/blfilms_berlin.htm

Consider booking a room at the Berlin Hilton like I did:

Hilton is usually not my first choice when booking hotels in Europe as I typically find them to have that “what country am I waking up in” sterile sensation you find in chain (even upscale chain) hotels. In general, I prefer locally-owned or boutique hotels and B&B;’s, but when in Berlin the Hilton is my favorite place to stay as much for the excellent location in the heart of the Mitte as for the excellence in the standard of the hotel and it doesn’t hurt that often my husband’s company is footing the bill when he and I travel together for business. It’s positively posh, with spa, masseuse and excellent gym, not to mention great restaurants and bars both in the hotel and nearby. It’s location on the Gendarmenmarkt is considered the most beautiful square in Berlin and the only bad thing I can say about the hotel is that the prices are as posh as the locale. If you’re a serious shopper, I wouldn’t consider staying anyplace else, as Quartier 206 & Galeries Lafayette are just around the corner. However, should KaDeWe be more your thing, then you might want to check out the more reasonably priced Swissotel Berlin which leaves a few extra Euros in your pocket for hitting the Fundus Verkauf.