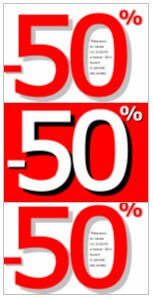 Get your charge cards ready… On your mark, get set, it’s time for the Paris Sales!

top:2px;padding-right:5px;font-family:times;”>All over Paris (and France for that matter) prices will be slashed, cut and discounted and rumor has it that the discounts will be unbelievable this year – tout le monde is discussing la crise economique and shoppers can cash in on unbelievable savings!

An American friend visiting me once when I lived in Paris asked, “What’s up with everyone being ga-ga over the Paris sales? What’s so special about them?” After I picked my jaw up off the floor, I explained, “In France, the sales are state mandated. The government regulates the sales and so les soldes occur only twice a year. It’s not like America where there is a sale every week!” My friend, grasping that it was important she understand the finer points of this discussion, inquired “But why would the government care if there were sales all year? Don’t they know it’s good for the economy?”

“Economy-Smonomy!” I responded, “The socialist democracy of France has higher pursuits than the economy!” Barb Wilde, author of The French Gardening blog and owner of the online-shop L’Atelier Vert explains this phenomenon better than anyone else I know. She writes:

“Without government regulation, stores were buying in cheap junk merchandise just for their sales and then pretending that it was good stuff they had marked down. (Imagine!)

To protect the French populace from such outrageous and unfair treatment (on the part of merchants–government bureaucrats are neatly excluded here), the state mandated that sales would take place only for a period of about 5 weeks in January and February, and again in July and August. Only pre-existing merchandise–ostensibly end-of-the-season stuff–is allowed to be marked down. 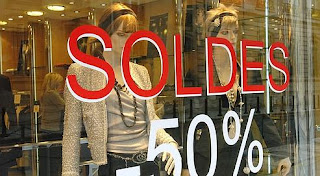 In fact, this has become an assimilated part of French commercial culture. Before the winter sales, for instance, it’s nearly impossible to find anything springy, for example. May the gods of French shopping have pity on you if you need summery clothes to go someplace warm over the holidays. “Resort wear” simply doesn’t appear at least until the soldes begin–well after the holidays. The markdown of the old wintry stuff miraculously allows the nouvelles collections to start appearing. Out with the old and in with the new. Literally.

The markdowns begin rather modestly–usually at 10%–and then become deeper as the sale weeks roll by, finishing up at a whopping 50 to 70% on whatever’s left at the end. Thus, shoppers play a sort of solde roulette, gambling on whether their desired purchase will stay around long enough to be marked down more deeply. Or if like me, they’re too busy to get out early, they simply get lucky–or unlucky, as the case may be. Wealthy international shoppers are of course crazy about the soldes, and in the large department stores during the first couple of weeks of the sales, you hear almost any language but French spoken by the shoppers who have descended on Paris from all over the world to get a bargain.

But the state-mandated soldes, like so many French rules, have a loophole – promotions.”

Typically stores sneak in mini-mid-year sales called Promotions and thus get around the loophole that stores are only allowed to have sales twice a year.

to 10px; WIDTH: 240px; CURSOR: hand; HEIGHT: 320px; TEXT-ALIGN: center” alt=”” src=”http://3.bp.blogspot.com/_kcTb8DnPVW4/Sjyszda7cuI/AAAAAAAADIY/ulQkZmGsJa0/s320/083.JPG” border=”0″ />Prior to le crise financieres you never saw the words “Les Soldes” used outside of the designated period… but when I was in Paris this April taking 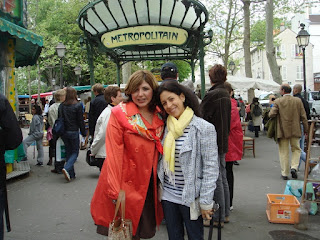 Travel+Leisure on an antiques shopping tour with Claudia Strasser of Paris Apartments, I saw something that I have never seen before – Quelle Horror! Les Soldes signs were hanging outside of Galleries Lafayette NOT DURING the official sale period!!! What has happened to France? On recent trips to Paris I’ve noticed that vendors – as soon as they heard my American accent – responded to my French inquiries in English (something which pre-Sarko never happened to me!) and they even smiled whilst doing so! Is it possible that France is changing? And now this… sales during a non-sale period?

Discussions with friends surmised that the economy was so low that the big vendors were willing to face the risk of government fines for “soldes-ing” out of “season”. Further supposition among friends-in-the-know indicates that this summer’s Paris sale might just be the best sale yet! And I’m going to miss it!!! Tant pis pour moi! But, my loss is your gain for this year in a special Les Soldes Antiques Diva blog, I’m going to let you in “behind the scenes” on my typical shopping route for the first day of the Paris sales!

And for those armchair travelers out there – never fear, I haven’t forgotten you! Courtney Traube, Paris Travel Expert on About.com, writes:

“Many top Paris stores, including Galeries Lafayette, have online stores offering sale items. If you’re not too daunted by the French, you can also try navigating specialized websites like 1000 Bonnes Affaires or L’internaute, which provide quick overviews of the best deals being offered in hundreds of stores. Remember, though, that not all stores ship outside of France.” 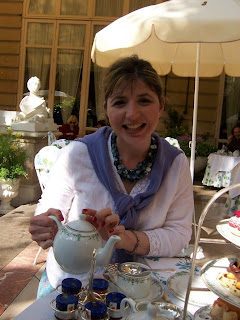 In other words, you might want to verify shipping options before you start online shopping!

In the meantime, TaTa for now, I’ll blog to you later!