hile my friends in America were celebrating Labor Day with barbeques and one last dip in their swimming pool before flipping on the switch to their gas fireplaces for autumn, here in Holland, on the other side of the pond, we’ve been doing a little end-of-the-summer-barbequing as well – South African style!! 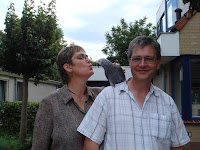 When The South African Princess and her charming beau, Dr. Braai (pronounced Br-Eye), invited us to a Sunday afternoon backyard barbeque, my husband, The Wine Guy, and I would have walked over hot coals to get there. Fortunately for us, our friends didn’t make us “Braai-virgins” go through any initiation rites and the only thing they asked was that we bring a bottle of wine to go with the barbie – a task we were certainly well 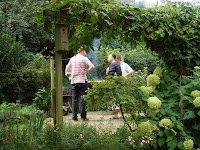 equipped to handle. Though they didn’t get picky specifying what type of wine we should bring, I’m certain The Doctor had a preference for us to bring a to complement the vast quantities of meat we were about to inhale. When braai-ing, none of that prissy “Chateau de la bla bla blah a la France” will do. Braai-ing is a strictly masculine endeavor and must be done with a sufficient amount of grunts and hollers. 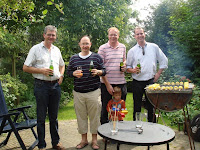 Even the mild-mannered, excruciatingly polite and gentle Doctor was found next to the coals with a longneck in hand making his entourage of Merry Men guffaw in the most surprising and shocking of manner. I can’t imagine whatever they might have been discussing which could cause such an uproar. Though I was certain I wasn’t allowed to enter their “fire pit”, I dared to go beyond the bush. To my surprise, as I peered through the fog of testosterone and smoke, there wasn’t a Weber® Grill in sight!

I was quickly to be informed that a sissy gas grill, like we use at home, was sacrilegious to a Braai-Purist. The Doctor liked to barbeque traditional South African style – using a drum barrel turned side-ways and cut in half, drilled with ventilation holes to provide the perfect degree of air circulation. Traditionally, this might have been converted from an old wheel barrow or washing machine drum, but The Doctor was a tad too classy for that- his was hand made in Rotterdam! 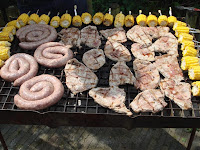 Hours before we actually sat down to eat, Dr Braai had built his fire, using a technique passed down from father to son. As we were a rather large party, I felt that the benefit of the drum grill was it’s mammoth surface area, allowing vast quantities of mouthwatering meat products to be plucked from the flames ready to be served in unison to the salivating guests. While I recognized the lamb, there were also a few imported items with which I was unfamiliar. First were the very Afrikaans boerewors – a fat and spicy sausage. Next to them were the sosaties, a lightly curried meat kebab similar to an Indonesian satay. 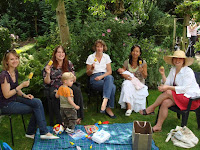 Realizing that I was not necessarily welcome to be standing around with the boys by the barbeque, I went back to sit with the women-folk. An unwritten law of braai- ing is that the grill is strictly off limits for women. It is the one time a year that the South African male rolls up his shirt sleeves, flexes his finely tuned barbequing muscles and shows off his culinary genius.

Women-folk are to congregate in the kitchen making side dishes, such as the grit-like maize porridge “pap en sous” and homemade chutneys. The South African Princess and her two lovely daughters had already taken care of these tasks, leaving us ladies foot loose and fancy free! I installed myself on a plastic thrown and sat in The Princess’ lovely garden sipping punch and eating grilled fruit kabobs and corn on the cob. 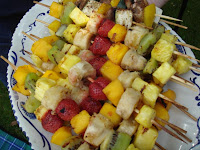 It was a thoroughly civilized way to start the party, with the boys fetching refills and picking up our discarded kabob sticks afterwards. I decided that I could get used to being waited on hand and foot by the boys! I was already calculating how I could get my husband, WG, to become the braai-master in our home. Since moving to Europe, he hasn’t barbequed as often as he did when we lived in the States and this is a situation I hoped to be remedied soon. Perhaps he needs his own drum grill? My washing machine has been near death for quite some time – perhaps we could put it to good use when it washes it’s final load? 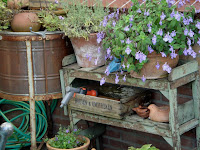 As often happens when the ladies get together, the conversation turned towards who
had children, who didn’t, who was expecting and who wanted to be. Then as if on queue, the Van P’s arrived with their freshly picked and ripened baby girl. The Princess ran inside to get a quilt to spread over the grass between us ladies on which to lay the baby. While everyone else was ooing and aahing, I murmured, “Isn’t IT beautiful?” 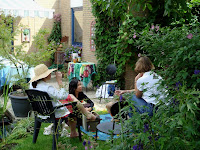 Several ladies shot me a disgusted look – inquiring with their eyebrows over my use of the word “IT”. ”No, No, No, you misunderstood,” I cried! “I wasn’t talking about the baby, I was talking about the quilt!” The South African Princess quickly piped in, “I made it!”

I remembered that she was the owner of Jabulisa, an online quilt fabric shop based in the Netherlands offering South African 100% cotton quilt fabrics, patterns, and kits. Immediately, the poor baby was forgotten and all the ladies began asking questions,“Did you make the quilt hanging in your entrance?””What about the one in the hall next to the kitchen?”

Mimi, the expectant mother of the group, said she’d love to make a quilt for her next-born son and immediately set a rendez vous for a private quilting lesson with 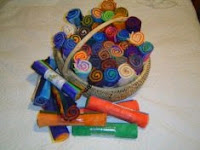 The South African Princess. The inquiries continued and, though I’d been the one everyone frowned at when they thought I had called the baby an “It”, they were the ones who asked to see the store-room for the fabric, leaving the beautiful baby faster than you can say “Jabulisa”. 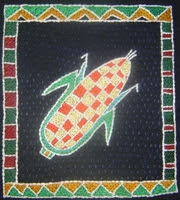 I’ve never been interested in quilting, but then again I had never seen South African fabrics before. I was already wondering if it was appropriate to make a skirt out of the quilting fabric, for the animal prints were right off last year’s runway. The ethnic prints (or what I considered to be traditional patterns) were so safari chic and the Field of Flowers line was calling out to be made into quilted pillows for my guest bedroom!

As I’m not a quilter, what stole the show for me was the charity project Jabulisa was doing with Ina le Roux. Le Roux, while doing a doctorate on Venda Folk Tales, was overwhelmed with the lack of economic opportunities in the northern region of South 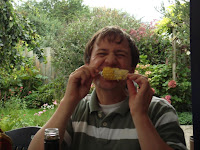 Africa. She decided to bring business into the area by inspiring the Venda women to embroider their folk tales, helping them to not only raise money but to preserve their oral tradition. I fingered a small, 10 X 12 embroidery of a corn-on–the-cob and thought what a perfect reminder it would make of this day.

Suddenly we girls were laughing with perhaps the same commotion (if not cacophony) the boys had displayed earlier around the grill. Only now it was The Merry Men who were wondering what all the fuss was about.

One by one, we ladies descended the steep, Dutch staircase to sit for our dinner – all of us feeling a spirit of comradery. If The South African Princess and her lovely beau, Dr. Braai, had invited 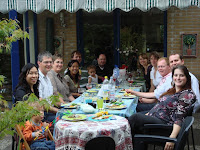 us to their backyard barbeque in hopes of making us happy, then certainly they’d achieved their goal.

For it seems I’ve forgotten to tell you that while “Braai” in Afrikaans means Barbeque, Jabulisa means, “to make happy”. Not only was Dr. Braai’s barbeque to die for, but also The South African Princess’ fabric was divine! We were one happy bunch, boys and girls united together at last, laughing and having a wonderful time. 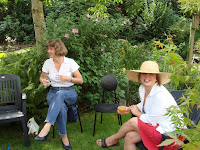 From my barbeque to yours,