top:2px;padding-right:5px;font-family:times;”>Hippity, hop, hop, hippity, hop, hop… Spring has sprung in Berlin just in time for Easter! Obviously Mother Nature knew that Easter is considered one of the most important events of the year in Deutschland – and brought out the sunshine to welcome the holiday with a sunny smile!

A walk down the Ku’damm is a delight at the moment bursting with Easter displays, yellow daffodils and chocolate bunnies tempting me with their brightly colored foiled packages! Did you know that many of the customs associated with Easter originated in Germany – including the use of decorated eggs as well as the Easter Bunny?

to 10px; WIDTH: 240px; CURSOR: hand; HEIGHT: 320px; TEXT-ALIGN: center” alt=”” src=”http://2.bp.blogspot.com/_kcTb8DnPVW4/SeDLS1aMgkI/AAAAAAAAC5Y/EcSTsttMnP4/s320/212.JPG” border=”0″ />Getting in the spirit of the holiday, I’ve spruced up my house, German style, in the time honored tradition of hanging eggs on the branches of the “Osterbaum” (Easter Tree)! Of course, I’m taking liberties with the tradition and pairing the hanging eggs with a bouquet of tulips paying tribute to my time in Holland.

In fact, this Easter my husband WG & I are mingling a montage of cultures. German/American friends The Pelikan Pen Guy and The Swiss Miss (along with The Little Swiss Miss) are in town this holiday weekend visiting us from their home in Zurich! Needless to say, we’re having a dashing good time! Today we hit the Berlin Trodelmarkt and I’ll soon be sharing some of our guest’s purchases with you in a special feature blog! But the culture connections continue from here – we first met these friends when we were all living in Paris years ago. So to commemorate the Paris Connection in Berlin we are doing Easter dinner at the French Restaurant Juliette in the German town of Potsdam. But the countries connection continues… this world-class restaurant lies in the center of the restored Hollandisches Viertel (Dutch Quarter) in Potsdam. 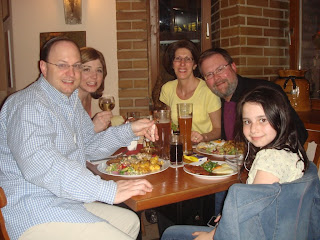 The Dutch Quarter will remind us of when these same friends visited us on an Easter of yesteryear when we were living in Holland!

It’s a small world after all!

y friend, The Swiss Miss, just called today to tell me about a Sensational Swiss Brocante she’s going to this weekend the 24/25 of August! When The Swiss Miss calls, it’s sort of like EF Hutton – everybody listens! If there is one person whose advice The Antiques Diva ™ trusts on where to go antique shopp 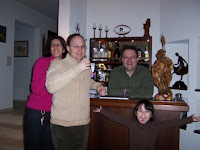 She has managed to get her whole family involved in the obsession and even her cuddly 8-year-old daughter, The Little Swiss Miss, has started a miniature porcelain collection that will certainly be sold off at Sotheby’s someday.

Mister Swiss Miss, an avid collector himself, is to be credited (or blamed, depending on the perspective) for my husband’s addiction to Art Deco statues, antique fountains pens and deer antler chandeliers (note to the reader: it is only this last item which has caused me to point blame at the Mister). You can see in the photo how the whole Swiss Miss clan is conspiring with “mon marie” to convince me that those antlers would look great in our living room – but I didn’t buy it then and I don’t buy it now!

Aside from that one sore point, our travels together wandering antique shops and brocantes in foreign countries and exotic places have netted some of our best finds and more than once we’ve returned home after a visit “chez them” with our trunk stuffed full of newly acquired treasures.

I knew that if The Swiss Miss was telling me that the twice-annual brocante (held once at the end of April and again in August) in Aarburg, Switzerland was good, then I’d better take notes.

The Swiss Miss Family likes the Aarburg Brocante for a number of reasons, perhaps most importantly because it reminds them of the French flea markets they used to visit when they lived in the shadow of the Tour Eiffel in the City of Light. Of course, the French brocante feeling might have something to do with the fact that Aarburg is located in the French speaking part of central Switzerland, located a mere 20k away from the well-known city of Bern.

But The Swiss Miss says it is more than the French aspects that catches her fancy. “Aarburg has a small river and a covered bridge and some of the stalls are set up in the covered bridge… it gets a little crowded browsing on the bridge, but it’s worth it.”

“In some ways it’s typically Swiss,” she comments using
a tone of voice that indicates this isn’t necessarily a good thing. “The prices are typically Swiss. There were many items I would have bought (like a few more of those Art Deco bronzes we love), but the prices were too high. Then again, we purchased two reproduction commodes for the price we would have paid for one any place else. Plus, there are many restaurants (Italian, French and German food) and each time we go to the Aarburg Brocante a stop at the pastry and coffee shop is a must”.

As a mother, The Swiss Miss is also particularly impressed with the efforts of the brocante coordinators to make the Aarburg Brocante an outing for the whole family. In the center of the brocante you’ll find a special area for the “children’s puce” where Swiss children are actually out and about selling their own used items. Little Swiss Miss brings her spare Francs and buys some great (to an eight year old mind) bargains. Some rare finds last time were a special Harry Potter purse and some cat and dog figurines.

The Swiss Miss concludes her elegy to Aarburg’s brocante by saying, “I doubt if you have time to come visit this weekend, but you really must plan to come visit in the end of April so we can show you around. It’s only an hour and half from our home in Zurich and certainly worth the drive.” 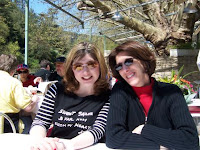 Much Love and Happy Shopping,

The Antiques Diva
with a little help from her regional reporter, The Swiss Miss

Email me with your travel tips, photos, shopping stories and advice…. theantiquesdiva@yahoo.com