Skip to content
to 10px; WIDTH: 400px; CURSOR: hand; HEIGHT: 300px; TEXT-ALIGN: center” alt=”” src=”http://1.bp.blogspot.com/_kcTb8DnPVW4/S22t9_I21PI/AAAAAAAAEKw/H6P7IphnmoQ/s400/Toma+Haines+-+The+Antiques+Diva.JPG” border=”0″ />top:2px;padding-right:5px;font-family:times;”>One of the things I love most about living in Berlin is Saturday mornings in the city. While on rainy days my husband, The Wine Guy, and I love nothing more than to sleep in, snuggling with the cat, but when the sun shines we get dressed and wander out in the city to explore our surroundings. We live in Mitte – which literally means the “center” of the city – and within minutes of stumbling out of our front door we’re at the Unter den Linden, basking in the shadow of Brandenburg Gate or lingering on the lawns at the Reichstag. If we’re in the mood for brunch we might head over to the Oranienburger Strasse and if we’re in the mood for a stroll along the river we hold hands and weave in and out of the joggers fencing the Spree. Inevitably, these strolls detour to the Berliner Kunst Markt (Berlin Art Market) at Museum Island.

to 10px; WIDTH: 400px; CURSOR: hand; HEIGHT: 300px; TEXT-ALIGN: center” alt=”” src=”http://3.bp.blogspot.com/_kcTb8DnPVW4/S22t9kFlpFI/AAAAAAAAEKo/o6KAa4PbWgo/s400/305.JPG” border=”0″ />The contents of the art market tend more towards tourist art than serious collector pieces, but the paintings are quirky and colorful and fun – the type of painting you might hang in your bathroom, a child’s bedroom, guest room or hall so that each time you pass by you just have to smile and remember your trip to Berlin. Paintings are sold alongside polish pottery, art glass and cute tiles commemorating local landmarks.

You can visit the Berlin Art Market every Saturday and Sunday from 11am – 5pm… and if it’s a sunny day you never know… you might bump into The Wine Guy & me making our Saturday morning rounds in Berlin! 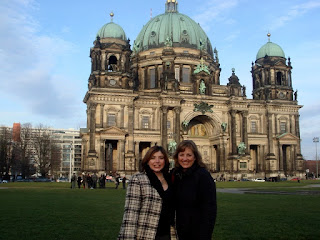 Have a Happy Saturday!

Sarah Sophia recently took a blog challenge posting 10 things about herself and now she’s asked me to do the same – to reveal 10 things you might not know about me. So without further adieu…
to 10px; WIDTH: 234px; CURSOR: hand; HEIGHT: 320px; TEXT-ALIGN: center” alt=”” src=”http://3.bp.blogspot.com/_kcTb8DnPVW4/SjNXgZhIZRI/AAAAAAAADG4/fKiZoFuqfqg/s320/Tomas+HAINES08.JPG” border=”0″ />Photo: taken before gala at the Louvre
1) I may play a diva on the internet, but I’m exceedingly practical in real life. Friends always joke about my CFO husband’s family budget and his multiple spreadsheets but what they don’t know is that while he’s the fall guy I’m the one who holds him accountable for staying on top of things! He’s the impulse shopper – I’m the planner.

2) I’m so obsessed with décor because if my surroundings are unattractive it makes me physically and mentally ill. We have 1 junk room in our house that gives me a headache when I enter it…. However this one junk room allows the rest of the space to be seamless. Did you ever see the Friends episode where Chandler discovers Monica’s junk closet? That’s my junk room!

Photo: view from my kitchen into living room

3) I dreamed I would marry my husband before I started dating him. We met when we were 16 and had one date, but we were both dating other people at the time. Two years later when I graduated from high school, we began dating but between that time and when I was 16, I had 3 prophetic dreams that I would marry him one day. Funnily enough, my ex-boyfriend’s mother (the mother of the boy I was dating in high school) – who had never met WG – also dreamed that I would marry him and told her son about the dream, asking “Does your girlfriend know anyone named WG?” She also dreamed that WG would work in finance.

4) I got married at the age of 22, two weeks after graduating university! He was 24! We’ve been married 13 years (and together 17) which means I am 35 and for the first time in my life I’m starting to feel old. Next year, he and I will have been together half my life – the best half of my life! Some people struggle with age at 29 or 30, 32 or 35 – for me, it hit me last month at 35 ½. I’m hoping this sensation of age is a passing one. On the bright side, most of my friends are older than me… so no matter how old I get, I’ll always be the younger friend!

5) My goal is to someday have multiple homes – a pied-a-terre in Paris, a small foothold in Italy, something in Belgium – a central base for my Antiques Diva Tour Business (and more importantly for basing our tax status out of) and another in Oklahoma to be near my family whenever I’m home-sick. Hmmm, I’d also like a gorgeous beach house in Thailand for getting away from it all and to be an Asian base.

6) My top 5 favorite foods in the world are 1. Foie Gras with Toast and Fig Confiture, 2. French Fries, 3. Gigantic American Salads, 4. Lemon Gelato 5.French Cheese Courses (served with a salad). I am obsessed with asparagus season, eating it daily while it’s on sale in the markets. I also love cherry tomatoes and rarely does a day go by without me eating a salad for either lunch, dinner or a first course. Once a year I get a craving for a big fat juicy American cheeseburger – and this craving must be met or else. While in general I prefer European cuisine, the “American” food I miss most while living abroad is “Mexican”.

7) I’ve designed my life so that champagne will be a regular part of it. I always keep a bottle chilling “just in case” the impulse hits – as nothing makes an ordinary day more special than a bottle of bubbly.

8) I’ve read every night before bed my entire life. I’m currently reading Lifeguard by James Patterson, just finished When We Were Orphans by Kazuo Ishiguro and the next two books waiting on my side table are Irving Stone’s 1961 best seller about the life of Michelangelo – The Agony and Ecstasy, and Philippa Gregory’s The Other Queen telling the tale of Mary Queen of Scots.

9) I don’t watch much television – and WG watches even less than me! We are both readers, retiring in the evenings to the library to read with a glass of port in hand – though I must confess, I might have majored in English literature in university, but WG is a more intelligent reader than I am. He’s currently working his way through anything written by an American expat in the 1920’s and 30’s and as of late, he’s been channeling Fitzgerald and Hemingway. Last week in Italy he even bought an ascot. We moved to Berlin a little over 3 months ago, and I still haven’t went to the store to buy the cable cord to hook up our TV to the cable outlet even though cable is provided free in our apartment.

to 10px; WIDTH: 320px; CURSOR: hand; HEIGHT: 240px; TEXT-ALIGN: center” alt=”” src=”http://1.bp.blogspot.com/_kcTb8DnPVW4/SjNXbsBFW-I/AAAAAAAADGo/X5ekVNGFlWA/s320/berlin+starbucks.jpg” border=”0″ />Photo: taken in Starbucks on the Unter den Linden nearby our home in what was East Berlin. And they call this progress?

10) I’m currently writing a novel in my spare time. I’ve written over 100 pages and am going strong. Just last week, I came up with an idea for a follow-up novel when I finish this one. I know it’s cliché, but I’m writing my novel fro
m the Starbucks on the Freiderichstrasse nearby my home in Berlin. I find when working on this book I need a change of scenery, so Starbucks has become my novel-writing office. I sit with a caramel macchiato in hand, me and my laptop for hours on end. I know this is Europe and I should not be frequenting Starbucks, but Starbuck’s wifi access and central location, cliché or not, win over Berlin authenticity and ambiance. 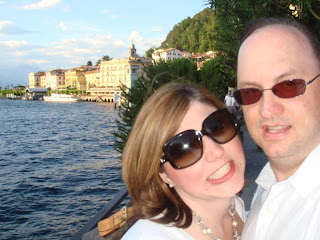 Photo: taken last week at a stopover for dinner in Bellagio Italy