top: 5px; float: left; color: white; background: #781300; border: 1px solid darkkhaki; font-size: 50px; line-height: 40px; padding-top: 1px; padding-right: 5px; font-family: times;”>As my Diva Guides and I shop all over Europe, we see a few consistent themes in antiques that span various countries and time periods – one recurring face that’s seen all over the antique world is the mythological “Green Man” which appears as sculpture, in drawings or as a representation on certain furniture pieces. 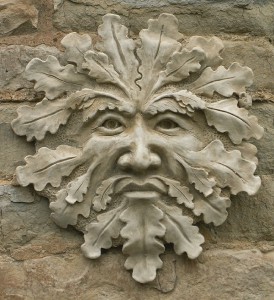 The Green Man is usually depicted as a human-like face surrounded by or incorporating leaves, branches and vines. On rare occasions you may see a Green Woman or a Green Lion, but it is most often a male face and sometimes there is a body as well, also made of vegetation. Some representations will have a head completely covered in leaves while others depict a man’s head simply spewing vegetation from its mouth. Still others will have a more stylized head made up of vegetation such as leaves as eyebrows and vines as a beard.

In some cultures the Green Man is thought to be a symbol of rebirth, nodding to the cycle of growth each spring. Other cultures view the Green Man as a deity, being lord over vegetation. Either way, he is a figure that has remained constant in several different cultures throughout the ages. 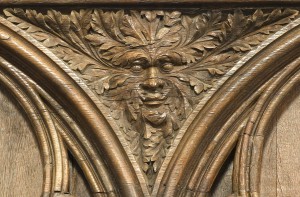 The Green Man can be spotted in architecture from all over the world. Sometimes he is incorporated into a plaster ceiling while other times he is cast in brass and made into a door knocker. From secular buildings to religious places, the Green Man is a decorative element that crosses lines of class and religion. While it may seem strange that this “deity like” symbol would be seen in Christian churches, one must realize that early missionaries would sometimes incorporate local gods into architecture so they wouldn’t alienate new converts. 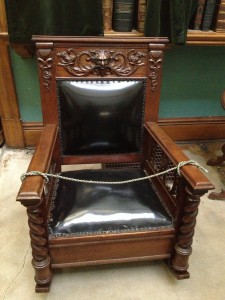 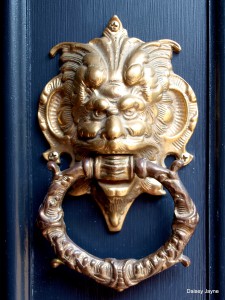 Regardless of the origins, the Green Man is most definitely still a familiar symbol in antiques and architecture. The next time you’re out and about, try to spot one of these leafy faces!